Can states with negative Wigner function exhibit no quantumness?

Well, outstanding as it is, @Martin 's answer appears to be identifying "quantumness" as entanglement, more or less, and I am reluctant to pick up a debate across questions; but your question is a plausible one.

I am aware of no cogent, direct indication in the literature that argues for "non-quantumness" for pure states with negative regions in their Wigner function.

The first excited state of a harmonic oscillator has, of course, a negative core in its Wigner function, displayed by the slice here, from our book CTQMPS, 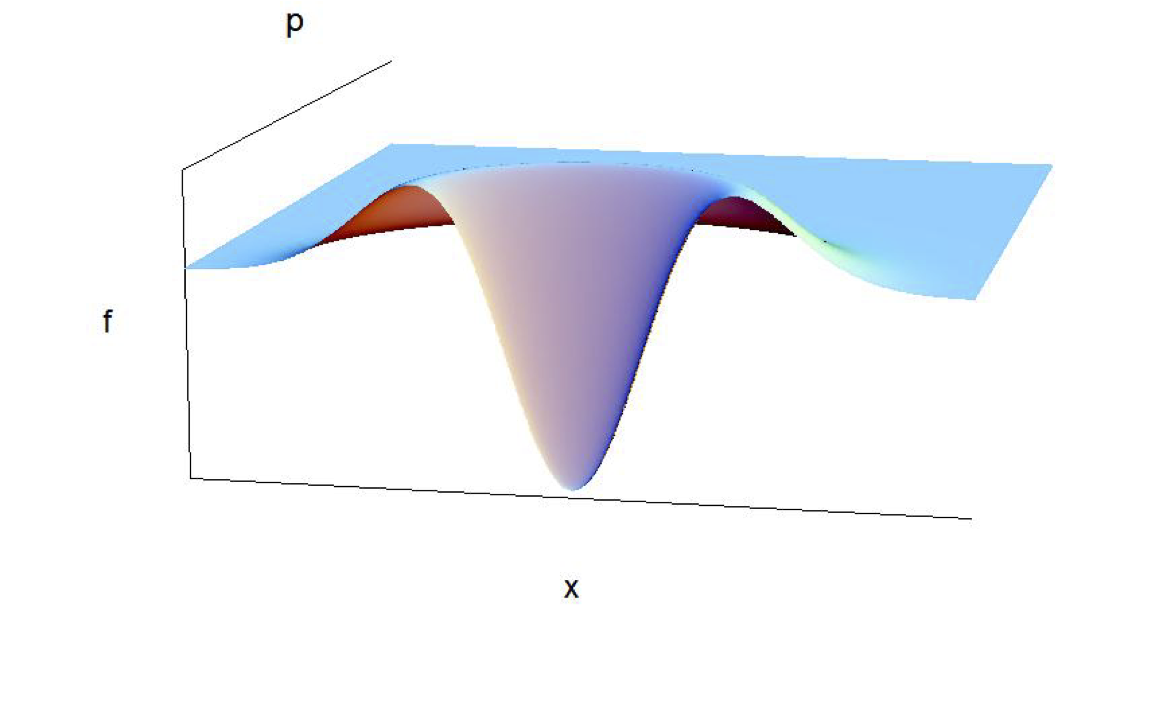 and it might qualify for the non-Gaussian states you are asking about. It is pure, static,unentangled with anything else, and not interfering with anything. I am not sure how you define "quantumness", but its phase-space overlap with all other SHO eigenstates, including the Gaussian ground state, vanishes---this was the point that made Wigner love negative phase-space probabilities in the first place! If you have worked with *-orthogonality in phase space you are all but guaranteed to love them too: they are a crucial feature on which the formulation basically runs. ($f_1\star f_1= f_1/(2\pi\hbar)$, but $f_1\star f_i=0$ for $i\neq 1$, so $\int dx dp f_1 f_i=0$.)

I would say that, even for an isolated static state just sitting there, the acid test of quantumness is actually $\Delta x \Delta p \geq \hbar/2$, as proven in a crucial chapter in the text cited. That is, the entire structure of the internal constraints at work in the Wigner function "conspire" to produce this constraint between its variances in an intricate way.

So, mathematically, served this quasi-distribution on a platter, you know it is quantum mechanical and satisfies the UP above, which, in turn, "hides" its negative areas in the remarkable way it always utilizes in phase-space QM: these areas are perforce segregated in small regions of area less than $\hbar$ where measurements of incompatibles are uncertain; and, finally, fails the 3rd Kolmogoroff axiom to be a genuine probability distribution for distinct/exclusive sample point alternatives. You might, if pressed, declare all this as self-involved math bloviation and not real "quantumness", but it sure quacks like a quantum duck...

(This might not count for anything, but all experts I have ever talked to don't bat an eyelid in declaring something quantum as soon as they glimpse a negative spot... It is only quantum contextuality mavens that are diffident, but they rarely call that "quantumness". Had you asked about "non-contextual non-classicality", I would have thrown you into the maw of Spekkens, 2008 and walked away from the question... )

Not the answer you're looking for? Browse other questions tagged quantum-mechanics quantum-information phase-space quantum-states wigner-transform or ask your own question.

6
Are negativity of the Wigner function and quantum behaviour equivalent?