Can electromagnetic fields interact with each other? [closed]

For example - if one were to generate an electromagnetic field using super-cooled magnets, and the magnets were shut off, is it possible for another field to interact with the collapsing one and essentially fire the remains out of a theoretical barrel like a shotgun? This would require each field to be opposite in polarity. And if so, would this generate any kind of measurable force and if so, would ramping up the power of the magnets produce more?

Edit: A better way of asking this would be this: Can a magnetic field hold a positive or negative charge strong enough to affect a magnet (as in pushing it away or attracting it) due to the polarization of the field? And if so, will two fields of similar charge repel each other?

After further thinking: Looking to the planet, we know that the north pole and south pole are strong magnetic fields and compasses work because magnetic metals are attracted or repelled by these fields. In theory wouldn't it be possible to generate a strong magnetic field that behaves in the same manner?

UPDATE: After doing some further research the reason behind this question has actually been answered and in fact tested and proven to work, though scientists only have theories as to why since it doesn't follow conventional thinking. Nasa has developed an EM drive which uses electromagnetic fields to generate thrust. Though my thought was that something similar could be done by using multiple fields, I'm not entirely sure how this particular system works. But it's a good read for anyone interested and this does open the doors for long term space flight without the need of fuels.

Strictly speaking no, but there is a caveat.

Electromagnetic fields consist of photons, so photons are the particles that "represent" (mediate) interactions between charged particles. Because photons interact only with charged particles, but are not charged themselves, they do not interact with each other. For this reason light beams of two flashlights pass through each other without scattering unlike two water jets. Furthermore, because photons are the "field" particles (bosons), they, unlike "matter" particles (fermions), can be in the same place at the same time (the Pauli exclusion principle does not apply to them). This also "helps" them to not "see" each other at all, practically flying as if through each other like ghosts.

Now, the caveat. Vacuum is said to be filled with virtual particles. Virtual particles are those that do not have enough energy to move in time. However, they can participate in very fast interactions. For example, two photons of a sufficient energy can produce two electron/positron pairs from vacuum. Then these pairs would annihilate by producing two new photons. The key here is that electron and positron are charged and for this reason can interact with photons. So when you collide two photons, they cannot interact directly with each other in principle. However, they can create electron/positron pairs that in turn would produce two new photons. This of course would look to us as if two beams of light scatter on each other, but deep down this would not be without a help of virtual electrons and positrons as charged particles.

This effect reqiuires very high energy densities and to date has not been observed with the most powerful electromagnetic fields (focused laser light). However, as @lurscher correctly stated in his earlier answer, the fields existing today are just not strong enough, but may become sufficient in the near future. The prediction of the photon/photon scattering is very interesting indeed and its discovery or a discovery that it does not exist, either way, would be a big deal in science. Likely a Nobel Prize magnitude. 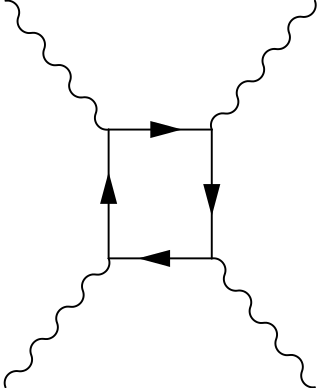 The Schwinger limit is the transition point from linear to nonlinear regime of electrodynamics in vacuum. This is a field of about $10^{18}$ Volts per meter. Next generation lasers might have enough intensity to get close to this region.

Nonlinear fields can interact with each other in nontrivial ways, and the higher the intensity of the field about this limit, the more orders of nonlinear susceptibilities have to be accounted for in the interaction, which means that the interactions will get more complex

My understanding is that magnets and capacitors made with existing materials cannot get close to this region, but I want to be proved wrong

16
NASA's “Impossible” Space Engine
5
Magnetism and Photons
5
Does light interact with electric fields?
0
What will happen if two beams of light of different colors are incident on each other?