I've read critique on ITER project (in Russian), and one of points was that cross section of ion-ion fusion is much lower than ion-atom and atom-atom, and that's the reason why it likely to not work.

Can anyone suggest where I can find how much lower cross sections are? I am mainly interested in D-D, D-T and B11-H reactions.

I have an answer to establish expectations from first principles. I have not looked up real values, nor am I hopeful of finding such values. All I'm doing here is setting a general expectation for the difference in cross sections of ion-ion fusion and ion-atom or atom-atom fusion. I should note that the one glaring piece of information missing from the question is the energy of the reaction. As such, my answer will be somewhat non-specific on that point, but my position is that it doesn't affect my overall conclusion that no major reaction rate benefit could be obtained in fusion machines by this proposed mechanism.

I used a number of simplifications to craft a simple algebraic form for the difference in cross sections. I should first specify though, I used a "radius" for the cross section defined as $a=\sqrt{\sigma / \pi}$. Yes, it is true that cross-sections aren't really areas, but for the relative scales here they can be treated as such. Now, here are the assumptions I used:

The basic proposition we have is that the ion-ion cross sections of the reactions are already known. This, naturally, depends on the energy. 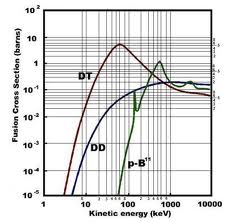 My proposition is that, whatever the ion-ion reaction trajectory is, it will be different from the ion-atom interaction by the electrostatic force operating at distances greater than the atomic radius. I hope my method is already starting to seem clear, but I'll use an illustration. The proposition is that 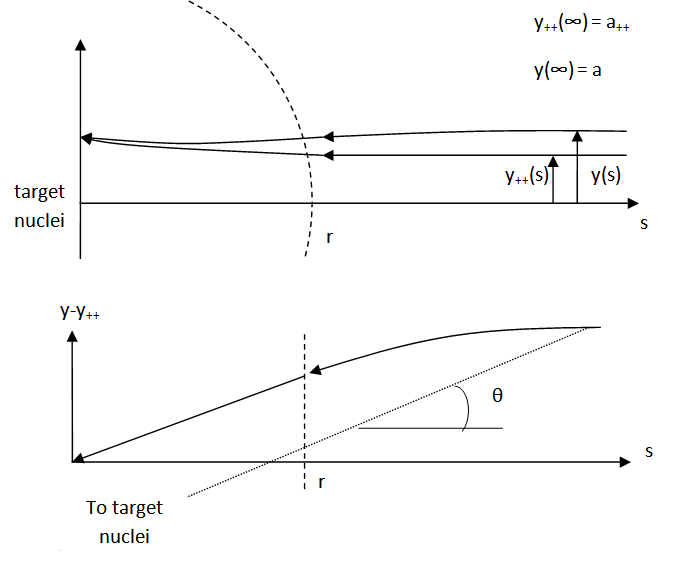 Using the assumption that the atomic radius is small compared to the fusion cross section radius, I can claim $\sin{ \theta} = a/s$. The electrostatic force from the net charges on the atom/ion will operate along the line between the moving atom/ion and the target atom/ion. The distance between these can be approximated to be equal to $s$. If we don't bother with the speedup from this force, then we'll just consider the component inward.

The speed of the incoming atom/ion is roughly constant, so I can give this approximate expression to get the above math in terms of time. This applies from $-\infty$ to $-r/v$. The $v$ follows from the energy of the reaction.

The interaction energy in ITER will be about $8 keV$, and the optimal energy for DT fusion is $80 keV$ (previous graph). If you had two neutral atoms interacting, the cross sections will be greater than the ion-ion interaction by 0.6 % at ITER energies. It would be an improvement of 0.06 % at optimal DT energies.

The best you could ever hope for would be the pB interaction with the B fully ionized (+5) and the Hydrogen with (-1). Even this is likely unattainable as some comments have pointed out. If we look at this at ITER energies (impossible but this is best-case), that would increase the cross section by about 5%. Pretty much all other scenarios would have less of an improvement than this.

The bottom line is that the Coulomb attraction at distances beyond the atomic radius is very very small compared with the Coulomb repulsion that the nuclei have to overcome as they get closer than that. Any adjustments to the cross section from this atom-ion or atom-atom interaction will really be <1% for most conceivable fusion reactions.

Added later: As to fusion:
First off, you need enough energy for the two nucleii to overcome the Coloumb barrier, so the fusion cross section is negligible (read effectively zero) below that energy. Then it climbs rapidly, levels off and declines as it gets too high (but that stage is also irrelevant for a practical fusion reactor). This energy is so high that you can basically ignore the electrons. It doesn't matter much if they are bound to the nucleii or not, or even entirely absent, as far as the fusion cross section is concerned. They do matter as far as energy is concerned, however.
Finally, even at the ideal energy, only about one collision in a thousand results in a fusion. This is why confinement is so critical. The nucleii don't fuse the first time they collide. You have to keep colliding them over and over again.

Try the aladin data base: http://www-amdis.iaea.org/ALADDIN/

Cross sections are crudely speaking the surface interaction (billard ball interaction), the bigest the particle, the higher the cross section, so one can not say things like "cross section of ion-ion fusion is much lower than ion-atom and atom-atom", it really depends on the species you study. One can not give a single value for cross sections because they are energy dependant.

The ITER project goals have been downgraded with the budgets. Breakeven is no longer an objective. At most they want to demonstrate they have the technology for the next big machine. The problem of the fusion community is that they have been lying for the last 50 years, always promising politicians a working fusion reactor if only they were getting the money to build it. But after every increase in size of the reactor they have discovered new instabilities they had not forseen. They nevertheless kept extrapoling results to convince the financiers. In fusion plasma physics a 50% margin between theory and experiment is considered as a great achievement. Concerning ITER, they are going to use beryllium (extremely toxic) to shield the wall, something which has never been done elsewhere. There is also the problem of the tritium production. They want to use a lithium blanket on the wall to produce tritium that will be burned into the reactor. If it does not work as expected, exit ITER, because there is currently only 30 kg of tritium available on earth and the nuclear plant which used to produce it is now closed (Canada). At last there is the energy and neutron fluxes on the walls. Current Tokamaks run 10s pulses. ITER is supposed to run a 500 GW, 10 min pulses. There is no known materials which can handle that. If there is a problem, with the toxic beryllium blanket, it will be a difficult one to solve.

Not the answer you're looking for? Browse other questions tagged nuclear-physics fusion or ask your own question.

3
What is the shortest duration fusion reaction?

6
Complete list of nuclear fusion reactions
16
Where does the energy produced by fusion come from?
12
Does tritium hydride exhibit measurable spontaneous fusion via proton tunneling?
0
Why is the nuclear cross section for fusion so small?
3
Has a nuclear "neutron halo" been measured directly? Anything other than "breaks easily"?
1
Lead catalyzed fusion
12
How many times do solar protons repeatedly fuse and fission before they form deuteron
1
In fusion inside stars (sun) or very hot gasses, how do the electrons get bound and what about tritons and $D$-$T$ vs $D$-$D$ fusion?