Is the many-body Green's function method a mean field theory?

Here is the famous book: fundamentals of many-body physics, written by Wolfgang Nolting. In the third chapter, he talked about the Green's function method to many-body physics and give a brief summary of this theoretical method at the end of the chapter: 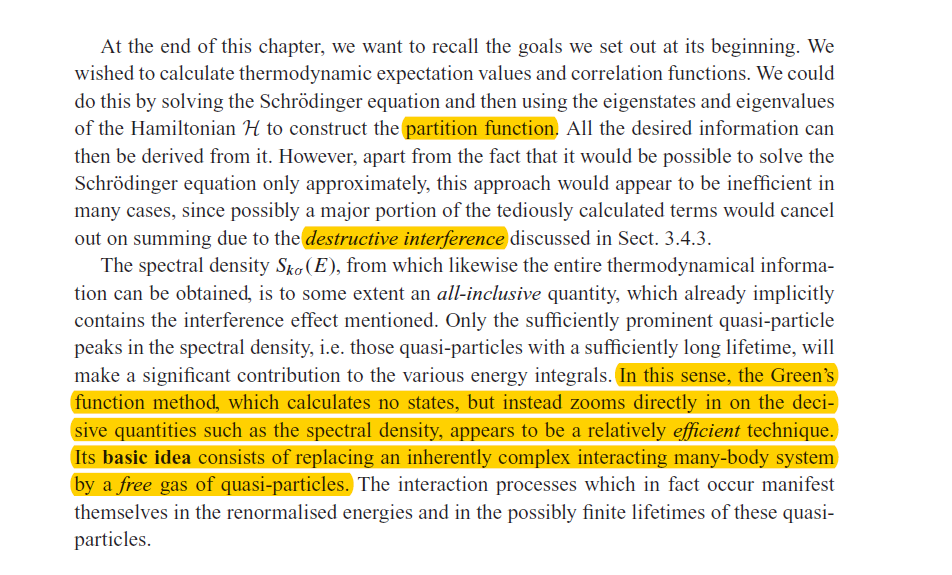 Can I think that the many-body Green's function method is just a mean-field theory?

The answer is definitely NO.

I have also used the above-mentioned Nolting's book to learn the basics of quantum field theory for condensed matter. In general, one should be always very careful when an intricate method or principle is described in loose wordings (just to serve as an introduction). If you continue your study towards the chapters where Nolting introduces perturbation theory, you will realize the meaning of those introductory sentences much better.

What he refers to in this sentence, “Its basic idea consists of replacing an inherently complex interacting many-body system by a free gas of quasi-particles”, refers, first and foremost, to the concept of Fermi liquid theory. Crudely speaking, a Fermi liquid is a Coulomb-interacting gas of electrons, where -- according to Landau's theory -- each electron of the original non-interacting gas is “screened” by a “cloud” of accompanying electrons (and holes), so that, effectively, this cloud can be considered, within a certain approximation, as a fermionic particle itself (just like the original electron); for a nice pictorial introduction, see Mattuck, "A guide to Feynman diagrams in the many-body problem" (WCat). Hence, in this way, the original complex strongly-interacting system of fermions can be considered (within the bounds of the approximation) as a system of weakly-interacting (or quasi-free) fermion-like particles (called fermionic "quasi-particles"). Therefore, the complexity is reduced and a perturbative treatment via Green-function techniques becomes feasible. For a detailed exposition of the concept of Fermi liquid theory, refer to Abrikosov, Gorkov and Dzyaloshinski, "Methods of quantum field theory in statistical physics" (WCat).

Remember that in general, the success of this Fermi-liquid approach in prediction of the real physics of an interacting system is not guaranteed. There are indeed many cases of high interest where that quasi-particle picture breaks down completely leading to novel phases of matter -- a well-known example is superconductivity; see also non-Fermi liquids.

Standard mean-field theory is just one of the lowest approximations one might perform to obtain the properties of an interacting system. There is no guarantee that it will suffice, and in many cases, it miserably fails. However, it is nonetheless important to obtain the first insights, and as a benchmark for more advanced approximations. As a side remark, a mean-field approximation can be formulated elegantly in terms of the Green's functions.

I haven't read Nolting's book so I can't comment on exactly what he was trying to say, but here are my thoughts:

We can often get a surprisingly accurate and nontrivial description of an interacting many-body system just by modeling it by a free field theory (i.e. no interaction terms). For example, Altland and Simons's book has an entire long chapter just on free-field theory applications to many-body systems, and the mean-field Bogoliubov-de Gennes Hamiltonian captures most of the important aspects of BCS superconductivity, despite the fact that it's noninteracting and the microscopic origin of superconductivity comes from interactions. The key insight is that even though our field theory description is free, we are not simply ignoring the microscopic interactions completely. A free field theory only has one free parameter $m$, which is often called the "mass," but it is not necessarily equal to the mass of the microscopic particles. Instead, it is the renormalized mass of the "dressed quasiparticles", which combines the effects of both the mass of and the interactions between the microscopic particles. Landau's brilliant insight was that the low-energy physics of interacting particles is often extremely similar to the low-energy physics of free particles with a different mass, so we can model the former by the latter, which is much more mathematically tractable. So mean-field theory often works surprisingly well. (Fermi liquid theory makes these ideas more precise.)

But sometimes mean-field theory isn't good enough - for example, it can't explain why quasiparticles sometimes decay. To incorporate those effects, we need to add interaction terms to the Lagrangian. Then the Green's function method is no longer exactly equivalent to mean-field theory. But in practice, field theory is usually only useful when the coupling constants for the interaction terms are very small, so that the fields are only weakly interaction. Then we can use perturbation theory to Taylor expand all observables around their noninteracting, mean-field values. So even when we use the full complicated machinery of the interacting many-body Green's function, we are still perturbing around a mean-field solution, so that this method is approximately equivalent to mean-field theory (although in practice, 99% of the hard work is in calculating the effects of those small deviations away from the mean-field results).

Not the answer you're looking for? Browse other questions tagged quantum-mechanics many-body greens-functions or ask your own question.

8
Hubbard-Stratonovich transformation and mean-field approximation
2
Help with understanding Green's Functions
1
What's the relation between zero temperature and ground state of interacting many body system?
1
Differences between perturbation theory in quantum mechanics, quantum field theory and condensed matter physics?
3
How do we decide the perturbation term in the Hamiltonian and what's the difference for the self-energy due to different perturbation terms?
5
Asymptotic relation of Green's function for diverging self energy