Can people create single photon in the laboratory?

You are absolutely right to focus on the detection aspect. It may surprise you that the physics community was convinced of the existence of the photon since the early 20's after Compton's experiment but that we had to wait until the 70's for a single photon to be actually "seen". So how can we demonstrate that we have one and only one photon?

A photon cannot be split

The trick is to use a beam splitter, i.e. a half-silvered mirror. A classical light wave incident on the mirror will see half its intensity reflected and the other half transmitted. The very definition of a photon is that it cannot be split. Thus a single photon will either be reflected, or be transmitted, but never go both ways at once. Moreover to match the intensity law, the probabilities shall be 50/50 for the two paths. An experimental setup can be sketched as follow.

The photodetectors are fast enough to precisely record the time of detection. One then plots the number of clicks in one detector and the other as a function of the delay $\tau$ between the clicks. We expect the count to fall toward zero as $\tau$ goes to zero if we truly have a single photon as it cannot end up in both detectors at once. Conversely, as $\tau$ increases, we expect to see this number of clicks rising as the time window becomes large enough for two or more successive photons to hit different detectors. This is exactly what experiments shows. Here is a plot from [KDM77] 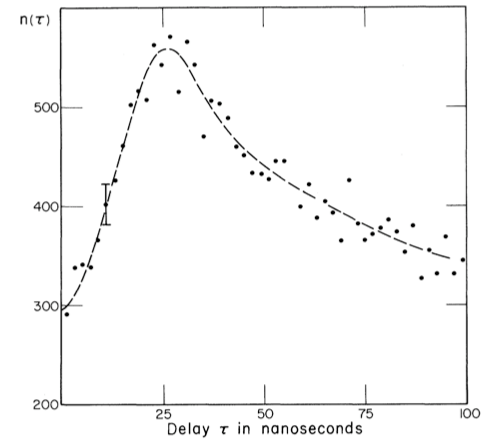 The dip near $\tau=0$ is called the anti-bunching effect. The value zero is not reached because there is an experimental uncertainty on the delay, which therefore is never truly zero. Thus, in effect, there is never only one photon in the experimental setup. This experiment rules out a pure wave theory of light for the reason given in the opening of this answer: the impossibility to explain why we do not get coincident clicks independently of the delay since half of the wave would take each path and each half would hit its respective photodetector at the same time. On the contrary, the result is clearly predicted if there are quanta of light.

Credit has to be given to Clauser [Clau74] for the first investigation of this kind of physics. The title of that article is actually revealing in itself: it may come as a surprise as we have been widely told that Einstein had proven the existence of the photon in that very photo-electric effect in his famous 1905 article but as Clauser explains it well in his introduction this is actually not the case. This subject has actually been thoroughly discussed on this Physics Q&A here: see especially the answer written by @ArnoldNeumaier but there are plenty of good arguments and references throughout the page. Another illustration of the saddening gap between teaching and popularisation of physics on one hand, and actual physics on the other hand, but I digress.

It should be noted that the arguments pushed forward by this type of experiment are, in a way, similar to the example of the diffraction pattern built one photon at a time given in @annav's answer: we could say that Clauser-style of experiment discriminate temporarily whereas the diffraction one-at-a-time discriminates spatially, as in a pure wave theory of light, however weak is the incoming signal in the diffractometer, some intensity will reach every point of the screen.

The idea is that if the source is actually a source of pairs of photons such that each photon of the pair is emitted nearly at the same time, then the arrival of one photon on A will guarantee that there is one photon and one photon only on the path Q. Thus the photon arriving at A is the "herald" for the other one, hence the name of this technique, heralding. But now, you may say that we are back to assume single photons but in fact both teams did perform complementary analysis convincingly pointing toward that conclusion.

Classical wave theory is ruled out

Grangier et al performed added one element: on the path Q, they put a beamsplitter sending the reflected beam to a photodetector B' and the transmitted one to another one B'' in a setup similar to Clauser's experiment above. But here, a hit on A opens B' and B'' for counting for a short duration $w$ of about 10 nanoseconds (we say that B' and B'' are gated by A). Then they performed three counts: the hit rate $N$ on A, $N'$ on B', $N''$ on B'', and the coincident hit rate $N_c$ on B' and B''.

On the other hand, Grangier et al considered the prediction of classical wave theory. It can be shown that the rates must abide to the following inequality:

versus the number of hits $Nw$ during the opening of the gate by A. A quantum mechanical description predicts that $\alpha$ goes to 0 as $Nw$ goes to 0, as we have just explained. Here is their result: 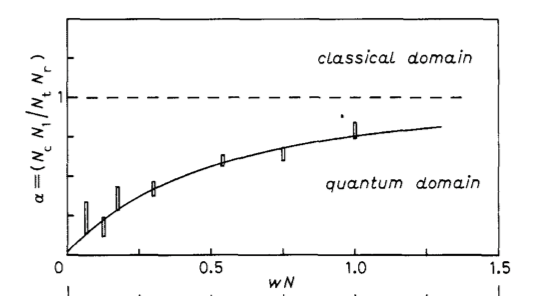 Grangier et al could not conclude more than that because their pairs of photons had far too broad of distribution of delay between the emission of each member of the pair: half of the pairs had their photons emitted at least 5 nanoseconds apart. It came to Hong et al to really prove they had only a single photon.

A single photon at last

What Hong and Mandel did is conceptually much simpler: in their setup, they put a single photodetector B on the path Q. Then when A is triggered, it opens a gate on B for 20 ns. Then they count the number $m$ of hits on B while the gate is opened. After many repeat, they get a distribution for $m$. The efficiency of the photodetector B being small, for most of the gates, $m=0$. Then $m>2$ is nearly zero. With the number of times $m=1$ was obtained, they could then work it backward what was the number of photons hitting B when A is triggered. Their result was: $1.06\pm10\%$! Their advantage over Grangier et al was that the two photons of each pair were emitted within less than a 100 picoseconds, i.e. a factor 10 better (they did measure this in another experiment).

Where to go next

I have basically only answered your second question about how to make sure we have single photons. I have partially answered your first question, as heralding can be used in practice to produce single photons, as explained. But since the 80's, several new techniques have emerged to produced photons on demand, very schematically, be preventing the source to emit until some action is done on it. There is quite an array of methods, based on single atoms, ions or molecules, on so-called quantum dots, on so-called colour centres (in diamond), etc. A comprehensive, recent, and relatively pedestrian review of the field can be found in [EFMP11], and I will lazily point the readers to it, shamelessly dropping the ball here!

Note that the question posed asked for the creation of single photons, not for their destruction. Thus discussions of photon detection are irrelevant for the question asked.

There are two kinds of single photons produced in the lab: "photons on demand" (see, e.g., Section 2.13 of http://lanl.arxiv.org/pdf/0810.1019v2 ) - which are truly single, and "heralded photons" (see, e.g., https://arxiv.org/pdf/quant-ph/0408093 ) - entangled photon pairs of which one partner is detected, so that it is known (after the detection time) that the other partner is now single. There are many articles discussing details; the two references given are only the tip of an iceberg. Google the terms in quotation marks to find many more references....

In 2003, A. Weis and R. Wynands at the University of Bonn (Germany) designed a lecture demonstration experiment of single photon interference from a double slit. Light from a laser pointer was so strongly attenuated that at each instant there was only a single photon between the double slit and the detector. The diffracted light was recorded by a single photon imaging camera consisting of an image intensifier (multichannel plate, MCP) followed by phosphor screen and a CCD camera. When adding consecutive camera frames one sees the gradual appearance of the smooth classical interference pattern

Each dot is the footprint of a single photon. The area covered by the footprint is much smaller than the area of the laser beam passing through the two slits,(which characterizes the classical laser beam,) as seen by their spread. It is a footprint a classical particle would be expected to leave in an interactive plane. This clearly shows the particle side of the quantum mechanical entity called "photon" The accumulated interference pattern is the quantum mechanical probability distribution of detection, as well as the classical interference pattern of a laser beam.

This video also is instructive .]3

How do people make sure that they have really created a single photon? By excluding other possibilities that the signal might have come from, and repeating the experiment until optimal parameters are found. In the above experiment by slowly reducing the intensity of the laser beam to "no signal" , to "single hit".

What nobody has mentioned is high energy photons. For their detection and measurement of energy and direction large sophisticated electromagnetic calorimeters catch tracks which interact in the detector and radiate a lot of electromagnetic energy, as electrons and photons. Here are two photons, as in this CMS reconstruction of events from measurements in the detector . 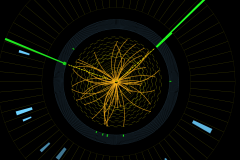 These are the two green histograms after an extrapolated dotted line connected to the event vertex. They are idetified as photons because there is no signal in the tracking detectors , and suddenly electromagnetic energy is deposited in the electromagnetic calorimeter.

Having built Cherenkov detectors, I have had experience with single photons: for instance, a minimum ionizing particle in air will produce a few photons per meter because of scintillation. A single photon is then detected in the Cherenkov's photomultiplier tube as background noise.

Not the answer you're looking for? Browse other questions tagged electromagnetic-radiation experimental-physics photons quantum-optics or ask your own question.

55
Can the photoelectric effect be explained without photons?
37
Double Slit Experiment: How do scientists ensure that there's only one photon?