Is it possible to measure directly gravitational effects of different kind of energy?

Let's consider an horizontal ring of radius $R$ and mass $M$, with a point mass $m$ hanging from a spring, suspended at a distance of $\frac{R}{\sqrt{2}}$ from the center of a ring. 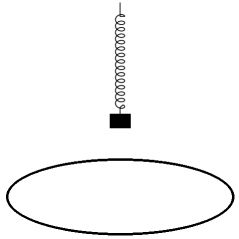 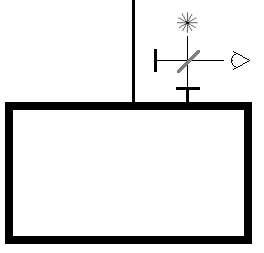 Interferometers are extraordinary tools, but so small wavelength are surely not compatible with the vibrations of the very massive fast spinning ring (don't forget that the bottom mirror is fixed to the suspended mass, that has to be near the ring).

You can think to a thermodynamic experiment too (if a tank of 10 tons of water increase its temperature of 100 K, this will increase above gravitational field of about $10^{-18}\,\,\frac{\textrm{m}}{\textrm{s}^2}$: almost the same order of magnitude of the ring experiment described above): this time we have no vibrations, but we should to know very well thermal effects on the spring (inevitably near the tank) when the heated system change its temperature...

You can think that if interferometers that work with $\lambda \approx $1 fm or smaller exist (they exist?) experiments like these could be doable. But anyway probably uncontrollable spurious effects would be much greater than the one we would measure. Like casual variations of the earth field (earth is not a rigid body) or simply a flying fly 100 m over the apparatus! Maybe this problems can be solved comparing with the motion of a second suspended mass on the side of the system, but there is another problem: we couldn't really stop a such suspended mass in a way that there are not oscillation of the order of fm (if only because of thermal reasons), so we couldn't stop the fringe shifting.

Without this condition we couldn't start the experiment (this is not completely true, we could study the variation of the harmonic oscillation in the two different conditions: when the "equilibrium" is reached, the motions before and after the $g$ increasing will look identical, but one will notice a greater fringe shifting in one direction during the variation of the gravitational field).

I wonder if, despite all the seemingly insurmountable difficulties, similar experiments (or different, but with the purpose to check the gravitational properties of different kind of energy) were ever tried.

Gravitational radiation measured at LIGO used Kms sized interferometers and measured oscillations of a fraction of the nucleus size. Can't remember exactly, maybe 1/100th or so. A nucleus is 1-15 fm.

I have not checked your math to insure that fm is the right order of magnitude for the different cases, but if it is it might be possible. Now, in LIGO they detected oscillations in the acoustic range, and separated them from the environment. It took a few years to design it and build it. But it might not adapt easily to your conditions. Here's why:

-the detections used spatial diversity (a pair of interferometers thousands of Kms apart). The diversity was used to eliminate noise false alarms. Makes a big difference, but am not sure the equivalent SNR improvement.

-they detected oscillatory behavior at a range of expected frequencies. You need to detect a change in a pseudo-static measurement. You'll have to think about that, see if there a design way to do it.

See the LIGO site at http://www.ligo.org There's papers and descriptions of the design and calculations.

Not the answer you're looking for? Browse other questions tagged energy gravity experimental-physics relativity interferometry or ask your own question.