Why does stellar nucleosynthesis not turn lithium into boron

Another discussion on this site (Why is there a scarcity of lithium?) as well as the wikipedia page on Lithium burning (https://en.wikipedia.org/wiki/Lithium_burning), have helped me understand why stellar nucleosynthesis doesn't generally produce a net amount of Lithium out of He-H reactions: because the Li thus produced quickly absorbs more protons (H nuclei), turning into unstable forms of Be, and then back into 2 He nuclei. But since stars also are about 1/4 He, why doesn't some of the Li absorb, not a H but a He nucleus, turning into a stable form of Boron (B)?

There is no fundamental reason the reaction can't happen. The reaction $Li~+~He~\rightarrow~B$ is however not energetically that favorable. In a supernova core fusion of elements into the actinide series can happen, but they are endothermic. Fusion processes that generate nuclei with an odd number of nucleons tend as a rule not to be as energetically favorable. The binding curve of energy permits one to see this somewhat for low mass elements. 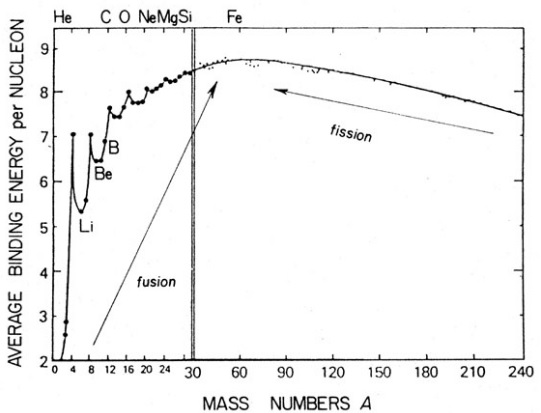 The Coulomb barrier for fusion with He, rather than protons, is twice as high and could only be initiated at higher temperatures.

Therefore, at the temperatures required for Li+He fusion, the Li has already been destroyed.

Lithium is produced inside stars (in very small quantities) as part of the pp chain. Specifically, it is part of the pp-II chain, which occurs above temperatures of $15\times 10^6$ K. At these temperatures the rate of Li destruction by protons is incredibly rapid, and even if a very small amount could fuse with He to produce Boron, then at these temperatures, the boron itself would also be destroyed by proton capture if $T>5\times 10^{6}$K. Thus there is no route to boron creation in stellar interiors and the majority of cosmic boron is thought to arise by spallation reactions between CNO nuclei and cosmic ray protons (or vice-versa).

Not the answer you're looking for? Browse other questions tagged nucleosynthesis or ask your own question.

100
Why is there a scarcity of lithium?

11
What would be the first compound formed in the early universe?
4
Nucleosynthesis: other than big bang and supernova
8
If there are long-lived elements in the Island of stability, why are they not present in Nature?
5
Why is carbon-12 stable while beryllium-8 is not?
1
Can stellar nucleosynthesis processes other than deuterium-lithium, i.e., oxygen-burning, take place in a reactor?
13
Why is nitrogen (with 7 protons and 7 neutrons) so much more abundant than any other odd-odd isotope?
2
Why is Big Bang Nucleosynthesis favored over Stellar Nucleosynthesis?
0
In Big Bang Nucleosynthesis (BBN), why aren't anti-protons created and destroyed?