Formula to determine acceleration based on constant energy input

I'm a software engineer building a simulator for train movement. What I would like to do is create an acceleration curve that's closer to reality.

My first physics teacher emphasized keeping your units correct. And I've been looking at various questions and answers on the relationship between kinetic energy and acceleration. The basic equation for force is:

The ConvertUnits web site says watts can be converted to

,which if applied over time has the same units as the $\mathrm{F}$ in the $\mathrm{F=ma}$. What I'm having a hard time is making the leap to include the effect of kinetic energy.

Hoping someone can at least point in the right direction.

I'm interpreting your question as you wanting to know the resultent velocity for an object of mass $m$ and initial velocity $v_0$ being accelerated in the direction of its velocity by a constant source of energy inputting at a constant rate $P$, the 'power'.

If your goal is to be closer to reality, you should use a model of a real engine. Call it European bias but when I think of train, I think of electric trains, so let's crudely model a DC motor. The crucial shortcoming of your model in that case would be that you would only take into account mechanical energy, ignoring the electrical energy. And we will eventually see that the power does vary, contrary to your hypothesis. The rated power of an electric motor is more like a maximum power. Warning: the following is from the top of my head as I haven't touched electrical engineering for 20 years!

The DC motors has a difference of potential $V(t)$ between its two terminals, and an intensity $I(t)$ flows into it, both depending on time $t$. This is a rotatory machine, so I will use a torque $T(t)$ instead of a force, and an angular speed $\omega(t)$ instead of a linear speed [*].

There are two key physical laws at work in the DC motor.

A detailed calculation (with diagrams!) would show that $K_1 = K_2$ but there is a heuristic argument demonstrating that: the electrical power is $V(t)I(t)$ and barring any loss it shall be equal to the mechanical power $T(t)\omega(t)$. Then that same loss-free hypothesis means no electrical resistance, and we will neglect any self-induction effect, resulting in $V(t)=V_e(t)$. From the two equations above, it is then clear that the two constants have to be equal. I will denote

Let's be a bit more realistic. I will take into account,

The equation for $\omega(t)$ is easily extracted:

To finish it up, we need to specify the input $V(t)$. I think the most realistic one is to assume that at $t=0$, one switches on the mains, i.e. $V(t)=0$ for $t<0$ and $V(t)$ is a constant $U$ for $t>0$. We then have a classic first-order system with a unit step on the right-hand side. The solution, traditionally obtained by Laplace transforms, reads

[*] Eventually, it will be connected to wheels and with the assumption that the wheels do not slide, it is easy to relate the linear speed $v(t)$ of the train to $\omega(t)$: assuming there are no gears, $v(t)=R\omega(t)$ where $R$ is the radius of the wheels. If there are gears, replace $\omega(t)$ by $k\omega(t)$ where $k$ would be the ratio of the gears.

[**] A self-inductance would have added a term proportional to $\dot{I}(t)$ to the electrical equation, making the coupling non-trivial.

Great that you remembered the teacher's advice about units!

"Constant power" works fairly well when an engine is running in a certain narrow range of speeds - unfortunately other effects will get in the way when you are going slowly (you would experience "almost infinite acceleration" if the power were constant), and at that point you usually look at the torque that the engine can produce instead.

Integrating once, we get

This looks a lot like "the total energy supplied (power multiplied by time) is equal to the kinetic energy at the end, plus some factor". That factor is "whatever you need to take account of the initial velocity of the object".

If the initial velocity is zero, then this equation will tell you what the final velocity is. It doesn't tell you much about the acceleration - and unfortunately, these equations tell us that for a very slow-moving object, the acceleration is "almost infinite" at constant power. You see this by rearranging (3):

Which tells us that when $v=0$, the value of $a$ becomes undefined... and as soon as you limit the maximum acceleration, the above equations need modification.

If you can assume that acceleration can be no greater than a certain value $a_{max}$, then you can break the problem into two smaller ones. As long as the velocity is less than

we should use "constant acceleration" for our equation (and assume that the rest of the energy is lost in heat due to wheels, clutch etc. slipping), then switch to the "constant power" expression for the remainder.

Of course the equation of motion for constant acceleration are

The answers by @Eddy and @Floris give a monotonically increasing speed because there is no resistance. Introducing a resistive force $R$ turns the ODE into $$P=mv\frac{dv}{dt}+Rv$$

That is probably not very realistic, because aerodynamic drag varies more like $v^2$ and rolling resistance is roughly constant. These assumptions dont seem to give simple explicit solutions for $v(t)$. However, for your purpose it might be OK to use this formula with $P$ and $k$ set to give the best match with observation.

The initial acceleration is still infinite, as @Luc observes. That is because the model assumes that full power is available instantaneously, we let the clutch out very fast.For early times Floris' solution is better. 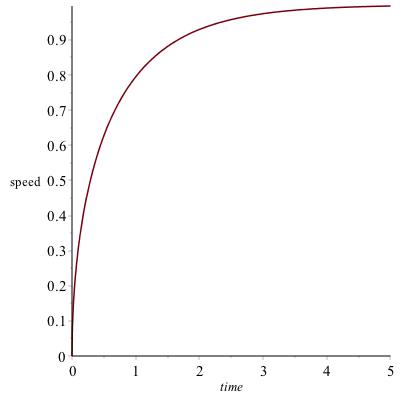 This leads to the following distance and time relationships, starting from initial time $t_1$, position $x_1$ and speed $v_1$:

Using the same integrals the motion is described by

Unfortunately this cannot be solved for $v(t)$, nor $v(x)$. But it your simulation you can use speed as an independent variable and find for example the time and distance needed to go from 60 mph to 61 mph, and so on so forth.

Again, using the same integrals the motion is described by

At speed v a vehicle has such gear on that the torque of the engine is multiplied by x.

At double that speed the gear is different, and the torque multiplication factor is x/2.

You see how this works: when speed doubles then acceleration halves, because the accelerating force halves, because torque halves. At low speeds real vehicles don't accelerate like crazy for various reasons, like for example not having a ridiculously low gear available.

Not the answer you're looking for? Browse other questions tagged newtonian-mechanics kinematics acceleration simulations or ask your own question.

1
How much does the resistance force realistically change when driving a car?

4
Ion Drive Propulsion Top Speed
25
How can kinetic energy be proportional to the square of velocity, when velocity is relative?
13
Is acceleration an average?
2
Integrals of Power
1
Why can motorcycles accelerate faster than cars?
0
Net work done in lifting
16
How does kinetic energy work in braking a vehicle?
1
The physics of board breaking