Distribution of weight of an inclined object

We have a rod, 1m long and negligible height compared to the length, mass 10Kg uniformly distributed (center of gravity in the center). It is tilted theta degrees to the horizontal, and rests on two supports at two extreme ends, with one support higher than the other. What is the weight distribution (forces) on both supports?

However, from experience we know that the lower support bears greater weight than the upper support, and as the angle of incline increases to 90 degrees, all of the weight shifts to the lower support, with none on the upper support. This seems to defy logic because if the weight on both supports is unequal and their lines of action are equidistant from the center while tilted, then there should be a rotational moment and the object should rotate.

So what is the correct method of calculation of distribution of weight depending on the angle of incline? Note that I am considering the case where the height is negligible, so the supports are at equal distance from the center, regardless of the angle of incline. 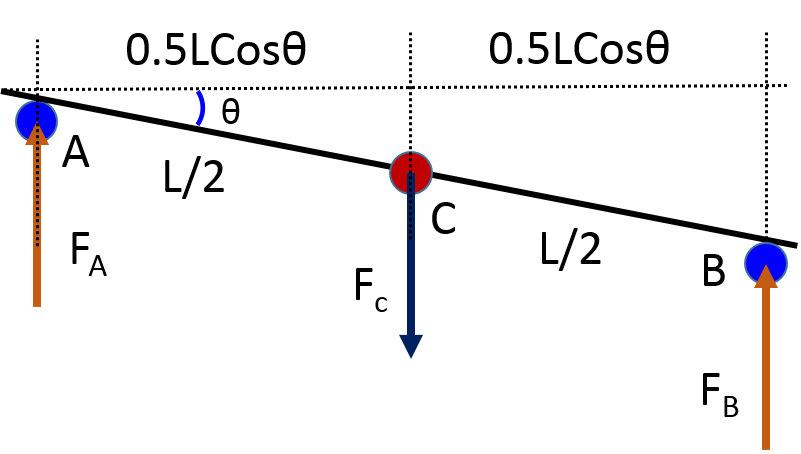 We refer to the figure above. Provided the rod is firmly fixed at ‘A’ and ‘B’, i.e. there is no sliding at ‘A’ and ‘B’, although it may swivel as on hinges, and gravity acts downwards in the figure (effective as force $F_C$), the supporting forces at ‘A’ and ‘B’ will always be $F_C/2$. Changes in θ do not change the relationship. Even in the vertical state when ‘A’, ‘B’ and ‘C’ lie on a vertical line, the rod is equally supported at ‘A’ and ‘B’. We apply some statics.

Now if, for example the fix point at A is a slot which allows the rod to not only swivel, but also to move freely in the longitudinal direction, then:

You correct that the normal reactions at each of the rod are going to be equal but you have neglected the fact that there are also frictional forces present.

Let the bar $AB$ have its centre of mass in the middle at $C$ and it has a weight $mg$.

Hopefully this gives you an indication of how you might analyse a more general situation? 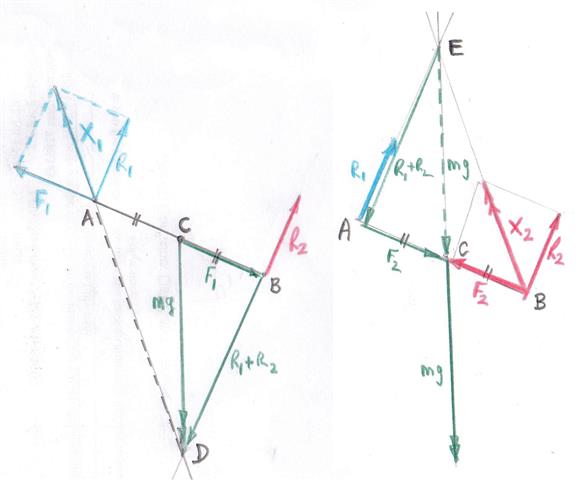 Referring to the left hand diagram.
The bar is subjected to three forces, its weight $mg$, a force $X_1$ at end $A$ and a normal reaction force $R_2$ at the end $B$ where there is no friction.

Since the bar is in static equilibrium the lines of action of those three forces must pass through a point $D$.

The force at end $A$ can be resolved into two components as shown in blue.
The normal reaction force $R_1$ and the frictional force $F_1$.
It so happens in this diagram that the magnitudes of these two forces are the same so the coefficient of static friction must be at least one.

Considering torques about the centre of mass $C$ shows that $R_1 = R_2$ and this will always be so irrespective of where the frictional forces act.
The weight $mg$ has also been resolved into two components shown in green to illustrate the equilibrium of the forces.

The right hand diagram can be similarly analysed but this time the lines of action of the three forces acting on the rod, $mg$, $R_1$ and $X_2$ meet at point $E$.

Not the answer you're looking for? Browse other questions tagged forces torque statics moment or ask your own question.

10
Two people are holding either end of a couch, is one person exerting more force than the other?

3
Centripetal force of a rotating rigid body?
0
Moment of weight of leaning beam
1
Wheelie physics part 2
0
Doubt related to rotational motion (rolling down an inclined plane)
4
Rotational work and forces such as static friction or ropes tension
0
Calculation of support reaction in rigid body rotation and collisions
0
Projectile on an inclined plane
3
Conceptual Question about Suspension Bridge Forces
3
Why does a force divide equally on multiple supports/legs?