I'm reading the section on scattering in Goldstein's Classical Mechanics, and I have a rather basic question about this.

It says that scattering in the laboratory is a two-body problem because of the recoil of the scatterer. Therefore, we convert the obtained data into center of mass coordinates in order to find the true scattering angle, the angle that we would get if the scatterer didn't recoil. However, I'm having a hard time understanding what exactly this center of mass system is. The figure (3.25) below shows the path of two particles moving towards each other, but it looks like it is simply the laboratory problem shown in the frame of reference where the center of mass is not moving.

My question: It still looks like a two-body problem to me, especially since the scatterer is deviating from its path. How does this simply the situation? Figure 3.25 still doesn't show a situation where the scatterer's position is fixed. Neither does figure 3.24. 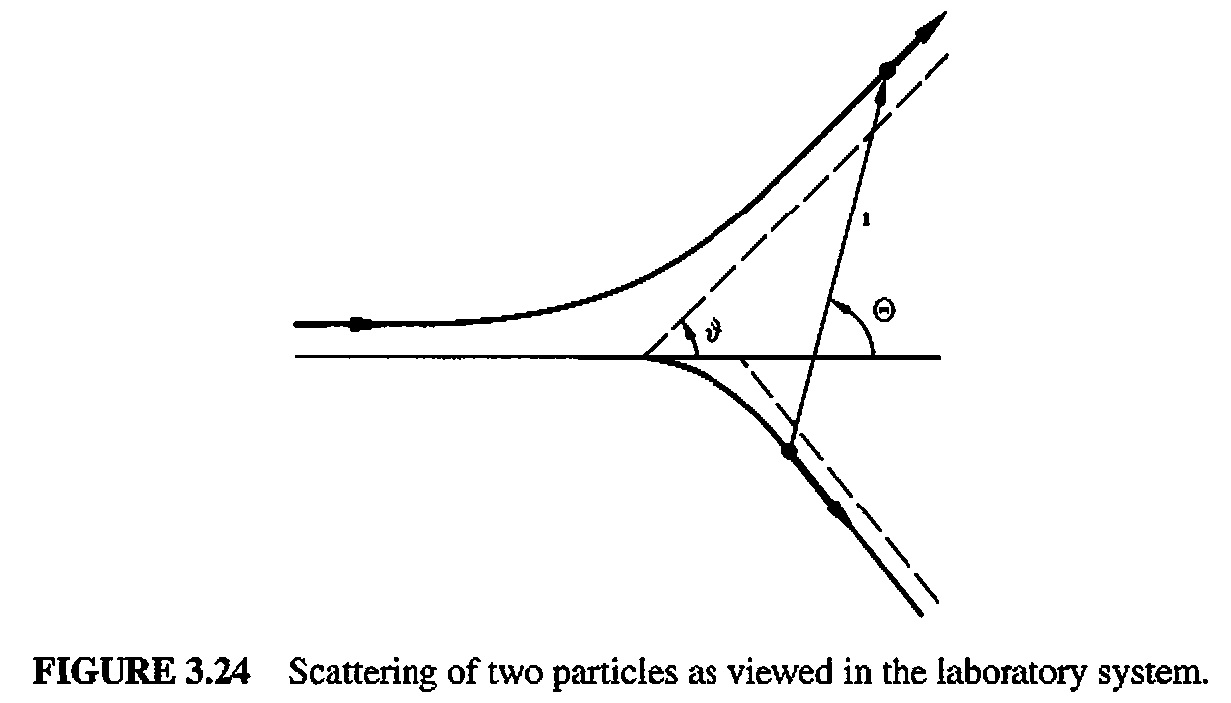 There's a subtlety here as to what is meant by 'one body' and 'two body'. What the author is trying to get at is the complexity of the mathematical description of the problem. In the lab frame, you need to specify the positions and momenta of each particle individually as e.g. $\vec{r}_1,\vec{p}_1,\vec{r}_2,\vec{p}_2$. If you want to work out what happens during the collision you end up solving a bunch of equations involving these quantities, either as functions of time, or their initial and final values, which can get a bit messy.

The advantage in the center of mass (actually I think it's more correct to talk about center of momentum here) is that the total momentum in this frame is $0$, so in the case of a two particle system, $\vec{p}_1 = -\vec{p}_2$. The equations governing the collision usually end up a lot tidier in this frame, and involve only the coordinates of 1 particle (after some trivial substitutions). The problem still involves 2 bodies, and we do in fact need a second pair of coordinates to get a full description of the system - the position and momentum of the CoM - but these don't appear in the equations governing the collision.

A quick summary... in the lab frame:

in the CoM frame:

Which one is actually "simpler" for a given problem is up for debate... in the end, the same problem is solved.

Finally, http://en.wikipedia.org/wiki/Center-of-momentum_frame does an ok job of walking through a fairly general 2 body problem in the CoM frame and how the coordinates of the particles are potentially simplified in that frame.

Not the answer you're looking for? Browse other questions tagged newtonian-mechanics conservation-laws scattering collision or ask your own question.

0
Scattering problem: Expression for angular momentum of particle
1
Collision problem: Finding the final speed of the collider
0
Two-Body problem confusion regarding equations of motion
1
solving a two body problem using relative motion and reduced mass
0
Will two planets in a binary star system rotate in the same circle around the mass center every period?
0
The center of mass frame and lab frame
0
Collision between two objects where the center of mass never moves
0
Velocity in body frame and inertial frame of the center of mass