Distinguishing Gamma-rays and stars from each other in nebulas

How do you tell the difference between a gamma-ray burst and a star just from a picture of a nebula, in which it cannot flash on and off here and there?

Observations are not made with a single photograph frame, they're made over longer periods of time (for example, a friend takes observations of Herbig stars over 2 minute periods in the J-band with Gemini North). The emissions from stars range from UV to IR (depending on your opinion, it could also range from IR to UV ;) ), these emissions are continuous (though periodic variances can be observed, hence the term "variable stars", but we'll ignore that class for now), so taking an observation now should give you (roughly) the same data any time later

Gamma-ray bursts, on the other hand, last for no more than 10 seconds (this type are called long-duration GRBs with short-duration GRBs taking less than 2 seconds) and then disappear (quiescence)--there are a class of objects called soft-gamma repeaters (SGR) that periodically (albeit irregularly) emit gamma-ray bursts, but not at the same flux as traditional GRBs, so they're not quite the same thing1. Below is an example of a long-duration GRB light curve which shows how quick/efficient observations of GRBs need to be,

Side note: The above is actually the last GRB detected by the BATSE detector on the Compton Gamma-ray observatory (CGRO) before it went offline in 2000.

The next obvious difference is the energies of the photons received. Gamma ray bursts have huge fluxes in, well, the gamma-ray regime: 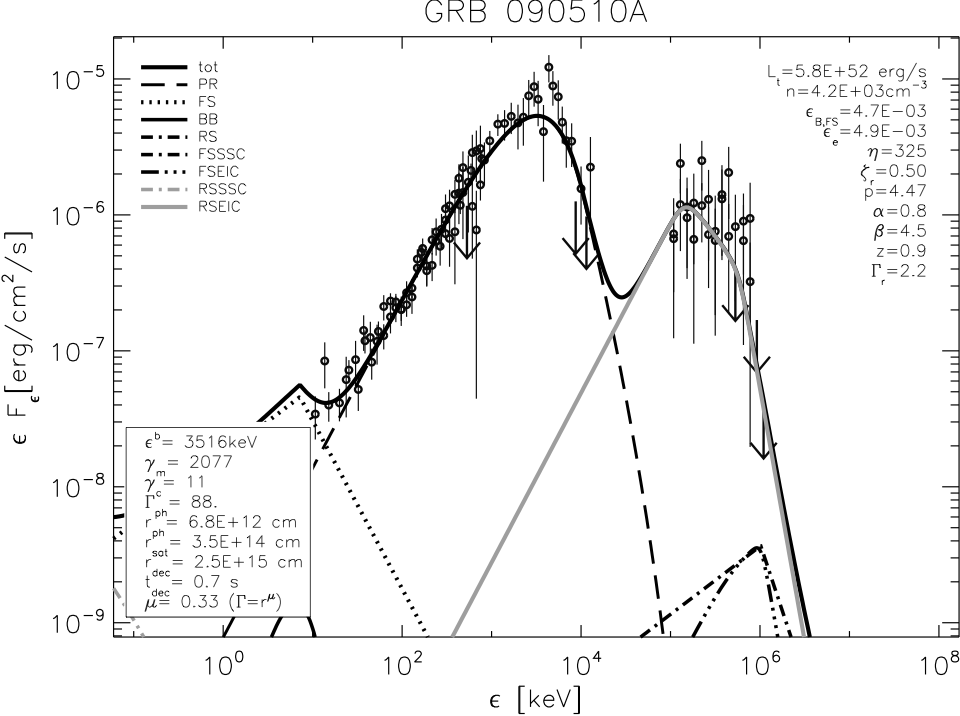 A study done a few years ago (arXiv preprint) using the Fermi space telescope looked at a few T-Tauri stars. The results (found in Table 2 of the paper) show fluxes on the order of $10^{-11}\,{\rm erg/cm^2/s}$, compared to the above $\sim10^{-5}\,{\rm erg/cm^2/s}$ for a GRB. So while gamma-ray emissions may be found in stars (particularly young ones)2, they're not at the same energy or duration as GRBs.

We can tell the difference between a star and a gamma-ray burst based mostly on the energy of the signal received, but also the duration of the signal.

1 This is probably where your confusion of the Crab nebula being a GRB, it's often considered an SGR.

2 It's actually believed that the gamma-ray signal in the T-Tauri stars stem from the acceleration of protons or electrons at magnetic reconnection events in the accretion disc, rather than from the star itself, so this statement might be misleading.

GRBs have a spectra far more Red-shifted than that of a star.. In fact, GRBs have such an unique spectra that nothing matches with it. Its profile has one or two high peaks of 1/2 seconds during which most of the energies will be emitted.. An ordinary star would be bright in optical wavelength... But, doesn't have any crazy peaks & hence won't be extremely red-shifted (Otherwise, we won't be able to see them) A GRB's redshift can be measured only with the afterglow when the initial gamma ray flare would be over. Also, Crab nebula doesn't host GRB phenomenon... It only flares up because of some abnormal neutron star spin-down or magnetic disturbances. And we're able to catch the ultra high energy gamma ray photons from Crab only because it's so nearer to us than any GRB you can name of... GRBs are always highly red-shifted extra-galactic explosions.

Not the answer you're looking for? Browse other questions tagged astrophysics stars gamma-rays nebulae or ask your own question.

6
How is the distance to a $\gamma \mathrm{-ray}$ burst (GRB) measured in just a few days?
1
Temperature from gamma rays?
1
Can pair production and recombination make a gamma ray appear to travel slower than the speed of light?
1
"gamma rays can only be detected when they interact with matter"
1
Can gamma radiation cause elements to become radioactive?
59
Why did the gamma ray burst from GW170817 lag two seconds behind the gravitational wave?
0
What can be the effects over the path itself of a gamma-ray burst traveling between two intermediate points of space-time?