Is it always possible to define energy of a system? [closed]

Does the concept of energy always exist for any physical system? If yes is there a proof? If no, any counterexamples?

Gravitational energy in GR is a notoriously tricky concept to define, see e.g. the Wikipedia page on stress-energy-momentum (SEM) pseudotensor; or this, this & this Phys.SE posts and links therein.

The usual practice is to define an arbitrary state of the system as an energy of zero. For example if I have a 100g wooden ball in a room, I might choose to define the zero state as when the ball is resting on the floor.

On the other hand if I were to burn the ball and allow the thermal energy to escape from the room, the energy of the system would now be negative with respect to my reference state.

In other words if someone asks "how much energy does this system have" the answer is "with respect to what alternative state?"

There are many conventions, which may be convenient for different situations. For example if the system consists of one electron and one proton, different individuals might define zero energy as:

In general the amount of energy required to bring about a defined change in state is very well defined.

On the other hand The concept of how much energy a system contains is meaningless, unless an appropriate reference state for the system has been defined.

Confusion could arise when people from different disciplines meet and have different ideas about what the reference state for "zero energy" is for a system. For the 1 proton, 1 electron system, all three of the above are in use.

There is one little trick you can employ if you really want to have an absolute definition of the energy content of a system. That is, to define its energy in terms of its mass, in accordance with Einstein's equation E=mc^2. The numbers obtained, however, are so vast that energy comparisons of everyday mechanical and chemical changes of state become impractical.

In theory of course it is possible to imagine systems that have no defined energy.

Imagine a universe shaped like a disk with a hole in it. A force-field goes around it in a circle, and a single particle spinning around at an ever-increasing rate: 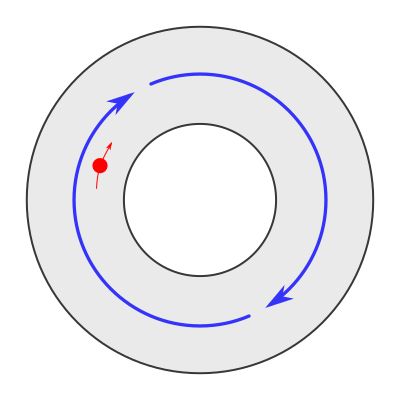 Now try to think how you would define an energy in terms of the particle's position and velocity that would control how the particle moves.

Of course, whether such a system could exist in the real world, I have no idea.

Not the answer you're looking for? Browse other questions tagged energy definition or ask your own question.