Discriminating between physics models needs accuracy in measurements. Accuracy means knowledge of four vectors of detected particles, the interaction vertex and the initial four vector of the impinging cosmic ray.

In the case of the discovery of the positron the signal of a new particle was simple, not needing a lot of energy or knowledge of four vectors:

While studying cosmic rays in a Wilson cloud chamber, the Soviet academic Dimitri Skobeltsyn noticed something unexpected among the tracks left by high-energy charged particles. Some particles would act like electrons but curve the opposite way in a magnetic field. In an independent experiment that same year, Caltech graduate student Chung-Yao Chao observed the same phenomenon. The results were inconclusive, and both scientists disregarded the anomaly.

The energies were low enough and all the cosmic ray flux could provide the luminocity.

Why was not the Higgs found in the cosmic ray TeV experiments? Because the accuracy for detecting the multiparticle decays would require enormous detectors with magnetic fields for momentum determination.

The Higgs to gamma gamma, the simplest decay of the Higgs is easily lost in a cosmic ray shower where no control can be had of the initial four vectors.

Have a look at the complexity of expected three decays of supersymmetric particles here to understand how the combination of "nocontrol of initial four vectors", need of " huge detectors" and complexity in the number of generated particels make it highly improbable to detect new resonances in cosmic ray showers.

The problem is that the energy of the cosmic ray itself is effectively irrelevant for producing SUSY particles. What is needed is a large center of mass energy, as that is all that is available for particle creation- the rest necessarily goes into the kinetic energy of the created particles.

To compete with the LHC, this energy needs to be larger than what the LHC can achieve. So $\sqrt{s} \gt 13~\rm TeV$. The best we can do for $m$ is a proton or a neutron. Plugging those numbers in gives:

So, to produce particles that the LHC cannot requires cosmic rays of approximately $100~\rm PeV$ or more. Looking at the graph of cosmic ray frequencies posted on @Nikl's answer, these cosmic rays are extraordinarily rare. Furthermore, even if SUSY was produced, it would be expected to occur at very low cross sections. We're talking like a one in $10^{15}$ sort of event.

Note that even the highest energy cosmic rays ever seen (on the order of ten joules) still have less than a hundred times the center of mass energy of the LHC when they collide with a proton at rest.

Theoretically the high Energy of some of the cosmic particles would suffice to create superpartners of SM-particles (if they exist and are in the energy range).

The problem I see here is the detection. We mainly look for supersymmetry by comparing our measured created particles to the current model (Standard Model). If our model is missing any particles then we should see discrepancies between measurement and prediction. To be certain about such a discrepancy we need very good statistics, meaning many events (Luminosity).

For the high energy cosmic rays there would't be enough events (even in a large detector) to look for new particles. Our current Standard Model fits pretty well.

LHC operates at several TeV. Looking at the graph below you will see that at that energy range there is only around one cosmic ray event of that energy per sqare meter and hour. 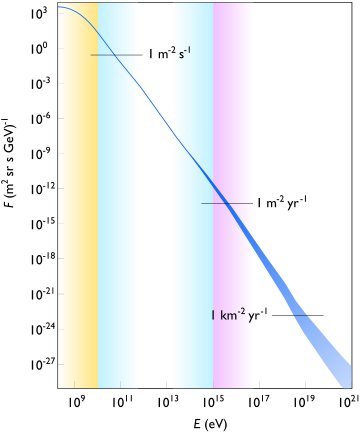 Not the answer you're looking for? Browse other questions tagged particle-physics supersymmetry cosmic-rays or ask your own question.

7
Why not using cosmic rays to study HEP, since they are way more energetic than LHC?
2
New physics at high energies, cosmic rays, particle-detectors in space

6
How are neutrons produced from cosmic ray particles?
13
Observed composition of UHE cosmic rays
2
Could the Sun be partly powered by cosmic rays?
8
Where do ultra-high-energy cosmic rays come from?
3
With the LHC about to restart as max energy, are there absolutely no hints or tantalizing signs of Supersymmetry in previous data?
1
What affects the propagation of secondary cosmic rays?
2
Layman's questions about Supersymmetry
1
How do we detect particles from cosmic rays whose lifetimes are on the order of nanoseconds?