Has the weak force ever been measured as a force?

Gravitational and electrostatic forces are everyday phenomenon, and continue to be tested by sophisticated experiments at various distances.

Rutherford measured the electrostatic repulsion of alpha particles from nuclei.

At higher incident energies when the projectile energy is sufficient to overcome electrostatic repulsion and distances of a few fermi can be probed, an attractive nuclear force shows up in the angular distribution as well.

But has the weak force ever been measured as a force?

I understand there is some subtleties here, since in quantum mechanical systems (like nuclear scattering for example) we use a potential form (nuclear plus electrostatic) and interpret the angular distribution by propagating an incident wave to get the angular distribution. So I wonder if a deflection in a scattering experiment due to the weak interaction would be good enough even if it might be difficult to interpret as strictly a force.

Can the weak force create a bound state?

The charges of the forces

If by "force" you mean a change of energy and momentum but not the type or number of particles involved, then weak neutral currents would be the answer.

These were predicted by Salam, Glashow & Weinberg, and observed by the Gargamelle experiment in 1973. There a particle was observed to start moving, after interacting with an (unobserved) neutrino.

The interaction there is mediated by exchange of a Z boson, which while massive, is uncharged and spin-1, similar to a photon.

Another example of the weak force acting "as a force" is the discovery of parity symmetry violation in the weak force by Chien-Shiung Wu, as predicted by Chen-Ning Yang and Tsung-Dao Lee (https://en.wikipedia.org/wiki/Wu_experiment).

The experiment concerned the decay of cobalt-60 atoms whose nuclear spins had been polarized in a magnetic field. The beta decay process produced an excited nickel-60 atom along with an electron and an antineutrino, and the resulting excited nickel-60 atom immediately underwent gamma decay to produce two photons. Gamma decay is a purely electromagnetic process, whereas beta decay involves the weak force.

The experiment involves measuring the distribution of both the gamma photons and the beta electrons twice: once with the magnetic field pointing in one direction, and once with the magnetic field reversed. This produced opposite spin polarizations in the cobalt-60 nuclei, which is equivalent to reflecting them in a mirror (i.e. acting on them with a parity transformation). The electromagnetic force is known to be parity-symmetric, which means that the gamma ray distribution should be the same regardless of spin orientation. In reality, the presence of a high magnetic field altered this principle slightly, which is why the distribution of gamma rays was also measured. Comparing the gamma ray distributions along with the beta electron distributions allowed for the researchers to control for the non-parity-violation-related effects of reversing the ambient magnetic field; if the beta and gamma distributions behaved in the same way under field reversal, then the weak force would be parity-symmetric. If not, then the weak force would be unique in its power to violate parity symmetry.

Long story short, the weak force acted "as a force" here because it deflected the electron trajectories in the direction opposite to the spin. 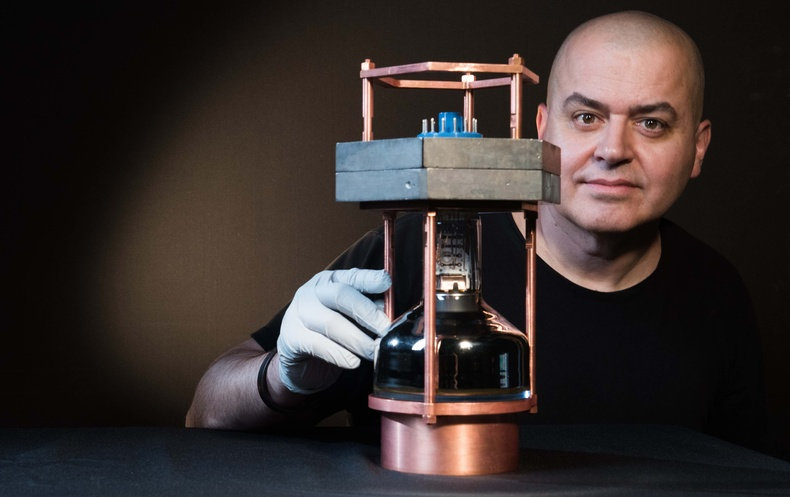 above: From Scientific American, Juan Collar, a professor in physics at the University of Chicago, with a prototype of the world’s smallest neutrino detector used to observe for the first time an elusive interaction known as coherent elastic neutrino nucleus scattering. Credit: Jean Lachat / University of Chicago

I'd like to add to this excellent, concise answer describing the Gargamelle experiment (also see CERN) first results reported in 1973; the first observation of elastic scattering due to the "weak force". From sixty-symbols:

The discovery involved the search from two types of events: one involving the interaction of a neutrino with an electron in the liquid; in the other the neutrino scattered from a hadron (proton or neutron). The signature of a neutral current event was an isolated vertex from which only hadrons were produced. By July 1973 they had confirmed as many as 166 hadronic events, and one electron event. In both cases, the neutrino enters invisibly, interacts and then moves on, again invisibly. On 3 September the collaboration published two papers on these events in the same issue of Physics Letters.

The article further states the size of the detector:

Since I originally posted the question, some new and notable results have been published. From the Scientific American article titled Ever-Elusive Neutrinos Spotted Bouncing Off Nuclei for the First Time; A new technology for detecting neutrinos represents a “monumental” advance for science :

That rarity has made life miserable for physicists, who resort to building huge underground detector tanks for a chance at catching the odd neutrino. But in a study published today in Science, researchers working at Oak Ridge National Laboratory (ORNL) detected never-before-seen neutrino interactions using a detector the size of a fire extinguisher. [...] The new experimental collaboration, known as COHERENT, instead looks for a phenomenon called CEvNS (pronounced “sevens”), or coherent elastic neutrino-nucleus scattering. (emphasis added)

[...] Soon thereafter it was suggested that this mechanism should also lead to coherent interactions between neutrinos and all nucleons present in an atomic nucleus (2). This possibility would exist only as long as the momentum exchanged remained significantly smaller than the inverse of the nuclear size (Fig. 1A), effectively restricting the process to neutrino energies below a few tens of MeV. The enhancement to the probability of interaction (scattering cross-section) would however be very large when compared to interactions with isolated nucleons, approximately scaling with the square of the number of neutrons in the nucleus (2, 3). For heavy nuclei and sufficiently intense neutrino sources, this can lead to a dramatic reduction in detector mass, down to a few kilograms.

To simplify, low energy neutrinos (tens of MeV) produced by the decay of pions, themselves a biproduct of GeV proton-nucleus collisions are detected by a block of (very pure, carefully formulated) salt as flashes of light with several specific characteristics. The radius of a nucleus is roughly 1.3 femtometers times $A^{1/3}$, so a Cesium or Iodine nucleus is going to be about 13 fm. For strong coherent scattering from all nucleons, the wavelength should be at least twice that. The corresponding momentum should be below 46 MeV/c, and conveniently the decay energy of $\pi^{+,-} \rightarrow \mu^{+,-}$ is about 34 MeV, producing a continuum of neutrino energies below that value. The pion decays produced a prompt neutrino signal, while the muon decay produced a delayed secondary source of neutrinos at higher energies. Both can be seen in the data. 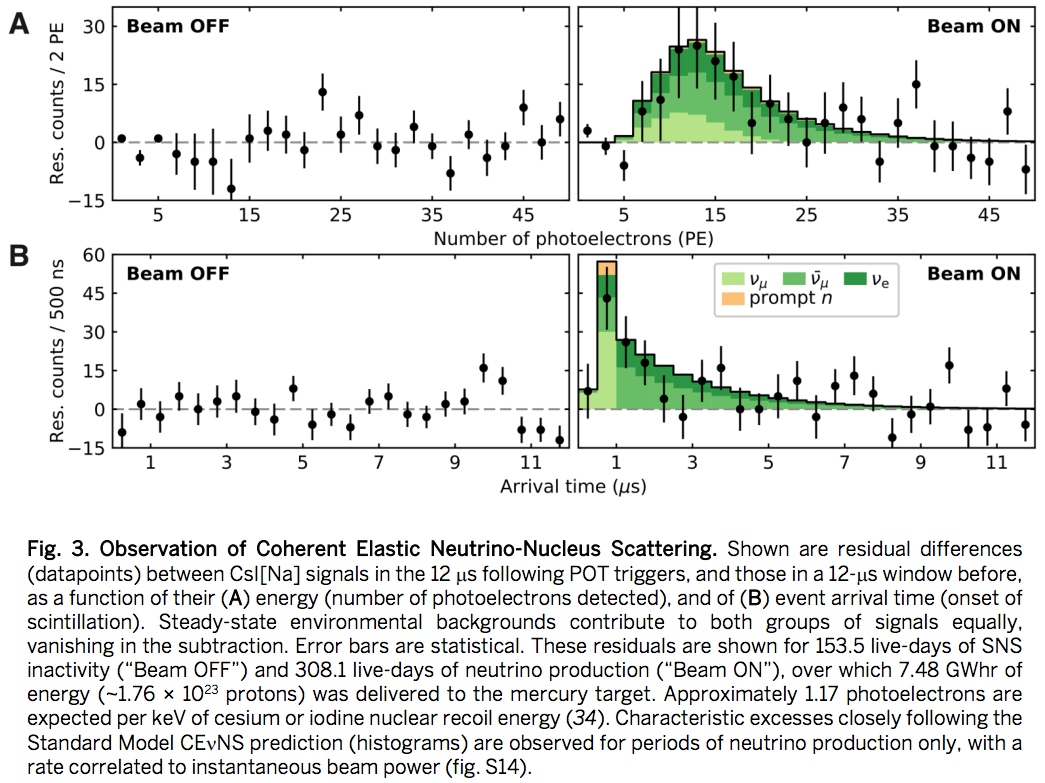 One of the major challenges of the experiment was to shield the detector from the extremely strong neutron flux from the spallation source, and to distinguish the extremely low energy elastic neutrino-nucleus scattering from all of the other scintillation signals produced in the detector

The results are summarized in the abstract:

The coherent elastic scattering of neutrinos off nuclei has eluded detection for four decades, even though its predicted cross-section is the largest by far of all low-energy neutrino couplings. This mode of interaction provides new opportunities to study neutrino properties, and leads to a miniaturization of detector size, with potential technological applications. We observe this process at a 6.7-sigma confidence level, using a low-background, 14.6-kg CsI[Na] scintillator exposed to the neutrino emissions from the Spallation Neutron Source (SNS) at Oak Ridge National Laboratory. Characteristic signatures in energy and time, predicted by the Standard Model for this process, are observed in high signal-to-background conditions. Improved constraints on non-standard neutrino interactions with quarks are derived from this initial dataset. (emphasis added)

Not the answer you're looking for? Browse other questions tagged weak-interaction or ask your own question.

38
Weak force: attractive or repulsive?
18
Do strong and weak interactions have classical force fields as their limits?
18
Can the weak force create a bound state?
7
Does the weak force have an attractive/repulsive force observable in everyday life like the other forces?
2
The charges of the forces
1
What are the equations for the weak and strong forces?
0
(In a beta decay) Between what particles are W bosons exchanged?