Parker Solar Probe passing extremely close to the Sun; what relativistic effects will it experience and how large will they be?

When the Parker Solar Probe passes within 8.5 solar radii of the Sun, it will be moving really fast.

So using the vis-viva equation:

the orbital velocity at perihelion will be about 195,000 m/s, or about 25 times faster than a satellite in LEO. This is close to one part per thousand of the speed of light! I think this will be a new record for a spacecraft velocity relative to the solar system.

Depth of a gravitational potential well for an object of mass $m$ is approximately given by:

At 6.6 million kilometers the spacecraft will be 23 times deeper in the Sun's gravitational well than it would be at 1 AU.

Will there be any particularly unique relativistic effects detectable for the Parker Solar Probe during it's close flyby of the Sun?

Just for example, during one close flyby, how much time will its on-board clock gain or lose compared to some convenient standard solar system timescale? I know there are several different choices, "GPS time" might be one but I don't want to arbitrarily choose an inconvenient one. 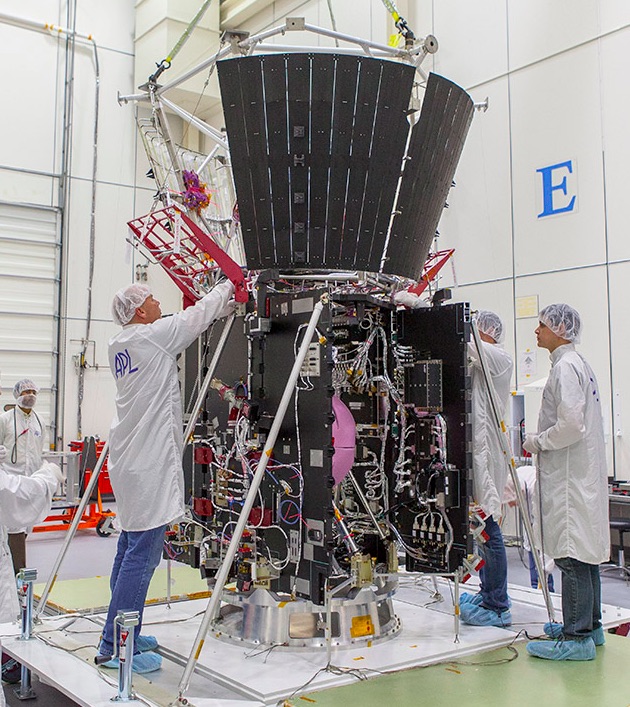 above: screen shot from NASA's

note: the link seems to be dead now, but there is plenty of related information available at http://solarprobe.jhuapl.edu/index.php#spacecraft 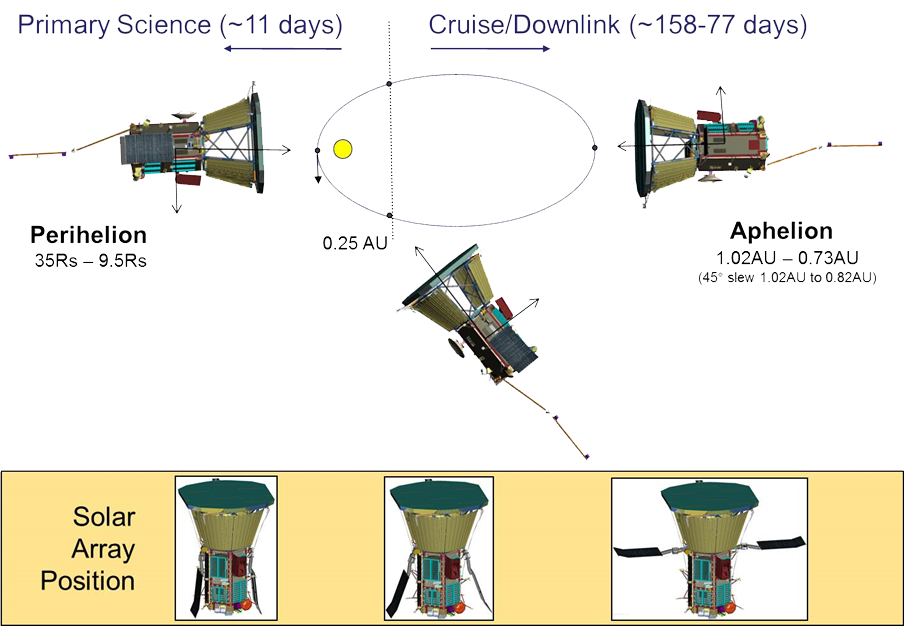 above: Illustration of the Parker Solar Probe's orbit, from here.

I've talked to one of the engineers who is involved with timekeeping on the Parker Solar Probe mission. I have not yet talked with the principle timekeeping lead, so this answer may have to be revised.

The effect on ranging calculations is due to what is called the Shapiro delay. From the paper linked below:

Shapiro delay is an increase in the travel time (the OWLT) of a signal passing through the gravitational field of a massive body, in this case the Sun. It was first confirmed by Irwin Shapiro in the 1960s using measurements of radar distances to Venus and Mercury. The Shapiro delay is important not only to the timekeeping as discussed here, but as a consideration in the orbit determination process itself for all deep-space missions. Both the radiometric range measurements and the Doppler velocity measurements are markedly affected by the Shapiro delay, so this delay is routinely included in deep-space navigation calculations. This effect is important for all portions of these missions; it is not limited to solar conjunctions, but it is more pronounced near those events.

Note that this effect is not due to the spacecraft itself being inside the Sun's gravity well; it is due to the radio transmission through the gravity field. Because of this all deep-space missions are affected by it; it is not a unique consideration for PSP. The paper cited used data from two missions: MESSENGER, at Mercury, very close to the Sun, and New Horizons, out at Pluto, very, very far from the Sun. But both had to transmit through solar conjunctions, sending the radio signal right through the Sun's intense gravitational field.

The paper linked below describes the Shapiro delay measured by MESSENGER and New Horizons timekeeping experiments, the second is the Wikipedia article about it.

Sorry for not including any mathematical equations in my answer! That is beyond my area of expertise! I will update this answer with any further information I obtain.

Others are more qualified to give you numbers as to how much time will be "lost", but I know the equation for gamma, the factor by which time slows, is

Therefore, traveling at 195 km/s, the probe would experience time about 0.2 parts per million slower than "normal".

Then using the equation for gravitational time dilation:

Gravitational time dilation also slows time by about 0.2 parts per million. I'm not positive how these two interact, however. I doubt it's as simple as addition.

From here (or here if you are ambitious) the lowest order terms to the relativistic frequency shift of a clock in orbit around a gravitational body are:

where the first term is the gravitational shift and the second is time dilation. Plugging in the vis-viva equation where $a$ is the semimajor axis:

With a perihelion of 6.6 million km and a semimajor axis of 57.8 million km, that gives frequency shifts of 4.3E-07 (half a ppm) and 1.3E-08 at perihelion and aphelion, respectively.

To calculate the approximate total shift in elapsed time you would have to integrate over the orbit. With a period of about 3 months (87.7 days) I get a total shift of about 0.3 seconds per orbit: 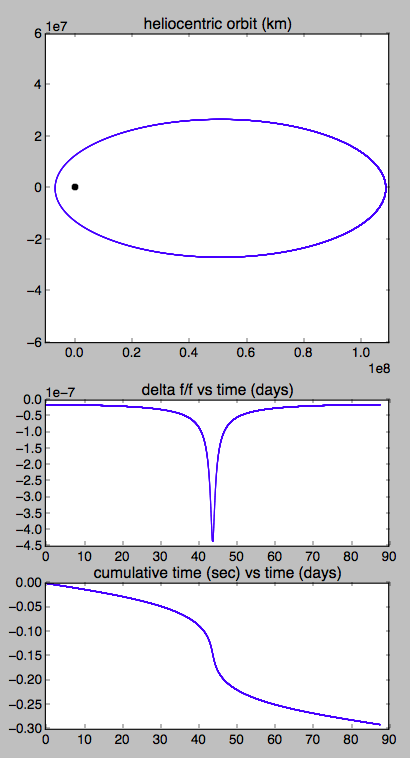 Not the answer you're looking for? Browse other questions tagged relativity sun estimation space-travel space-mission or ask your own question.

3
Are the effects of general relativity accounted for in the calculation of the trajectory of the PARKER probe?
5
Time dilation in a gravitational field
3
Parker Solar Probe top speed
3
Experimental limits on non-Newtonian gravitational force at length scales larger than 1 meter?
1
Voyager spacecrafts life span and theory of relativity

3
Mars Circular Intercept Orbit
4
Could the Earth be ejected when the sun burns out?
0
What unusual effects will we observe on the non-rotating Dyson sphere with Earth gravity around the Sun?
1
Effect of radiation pressure on Earths orbit in large timescales
25
What causes our Sun to oscillate around its mean Galactic orbit?
0
Will 100 km body impact with Sun produce burn for people on Earth?
27
As the sun expands, will its Roche limit also expand?
3
Parker Solar Probe top speed