Physical interpretation of density of states

The following pictures shows some typical examples of density of states: 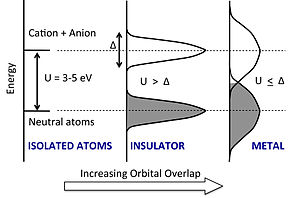 The hole and electron bands in your example are, in other words, occupied and unoccupied (virtual) energy bands. If you flipped that, it means all the electrons have been exited into the conduction bands, leaving behind unoccupied states in what used to be the valence bands. Such a scenario could be realized, for instance, with powerful laser pulses, where the excitation density is high enough to momentarily excite everything from the valence bands.

The energy of some states is negative only because of the chosen reference value, which is generally the Fermi level. There is no need to invoke the antiparticle concept here.

Not the answer you're looking for? Browse other questions tagged quantum-mechanics condensed-matter solid-state-physics density-of-states or ask your own question.

1
Holes in a P-type semiconductor under external force E
0
Understanding Wikipedia's “Semiconductor Band Structure” diagram where the bandgap appears to increase with increasing density of states
7
How to compute the density of state from the Green function?
3
Size of the fermi surface of hole and electrons
2
The concept of Fermi level
0
Confusion about average KE in free electron model via Density of States (DOS)
4
Why does an energy band crossing the Fermi energy mean the gap closes?
0
Are there quantum states between the conduction band and the valence band?