How many independent properties can a photon have?

Two recent papers about photon orbital angular momentum have set my head spinning as well. I'll try to define "property" as something you can change in one arm of a Mach-Zehnder interferometer, and "distinct property" as a change in the interference pattern from one property change that can not be imitated by making a change in a different property.

My Mach-Zehnder interferometer is built in free space (not in waveguides or fibers) on an optical table.

I can change the direction of the momentum with a wedge prism in one arm, or the magnitude via doppler shift with some piezo-driven mirror. These result in various fringe patterns in 3D at the output which can be probed and mapped. Momentum is one property.

I can change the polarization state in one arm using a rotating half wave plate. This will reduce the amplitude of any fringe pattern (or asymmetry in intensity between the two outputs. Polarization is one property.

I can affect the population of the helicity states in one arm using a quarter wave plate. I'm guessing that the macroscopic property of circular polarization is related to this. This will be distinct from the changes caused by the half-wave-plate-induced polarization changes when looking at the difference between the patterns in the two outputs of the interferometer. Helicity is one property.

Now, reading that photons with non-zero orbital angular momentum, or vorticity are less exotic and more commonplace than has previously been thought, I'd like to understand better if it must now be considered as fundamental property as the others above.

Question: Is orbital angular momentum, or "vorticity" a fourth property of photons that would work in my definition of distinct, independent properties?

Are there more I haven't thought of?

below: One implementation of a Mach-Zehnder interferometer using an extended, collimated, coherent source. From here. 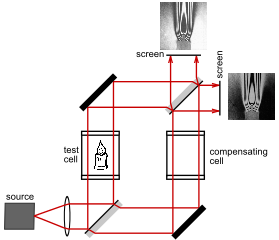 Longer answer: Photons as associated with creation and annihilation operators that can in general be represented by:

where the subscript $s$ represent the spin, which manifests as the polarization of the the light, and ${\bf k}$ is the propagation vector. (Here I only consider propagating fields. For virtual fields there would also be the angular frequency $\omega$ as an independent degree of freedom.) The spin degree of freedom is reduced to a two-dimensional Hilbert space due to gauge invariance. The propagation vector is a three-dimensional vector, which gives three infinite dimensional Hilbert spaces. The latter represents the spatio-temporal degrees of freedom.

In addition to the spin and spatio-temporal degrees of freedom, one also has the particle number degree of freedom. This comes from the fact that one can have states with multiple photons that are mutually orthogonal.

So how would one measure the OAM of a photon? One can do it with a two step process. All OAM modes have an azimuthal phase dependence given by $\exp( i \ell \phi)$, where $\phi$ as the azimuthal coordinate and $\ell$ is an integer representing the azimuthal index, and which is proportional to the OAM of the mode. First, one would need to remove this helical phase with a hologram or spatial light modulator having the conjugate phase. The next step is to couple the result after the modulation into a single mode fibre. Since a mode with a nontrivial helical phase cannot couple into a fibre, the light that does couple into the single mode fibre had to have the right azimuthal index before the modulation step. Thus we can determine the AOM of the mode.

If one has a classical light beam with a vortex in it, one can observe the vortex by looking at the interference between this vortex beam and a plane wave (beam without a vortex). The vortex shows up as a forked fringe within the interference pattern. Higher order vortices would give forks with multiple prongs.

To address the actually number of degrees of freedom (which I apparently missed in the question), we consider them one by one:

The photon wavefunction has an essentially infinite number of degrees of freedom. Proof: the shape of a wave front describing a photon wavefunction can be described by Zernike polynomials. The terms are orthogonal: change the amplitude of one, and it does not affect the amplitudes of the other terms (other than the necessity of normalizing the sum of all amplitudes). Further proof: every wavefunction has a non-infinitesimal spectral bandwidth. All spectra (an infinite number) that have that bandwidth are valid states of the photon. The number of terms of a Fourier transform used to describe such a spectrum is infinite and the terms are orthogonal.

Interference in a double-slit interferometer illustrates the fact that the "position-state" of the photon can exist in superposition. The relative likelihood of the photon passing through either slit can be measured by alternately blocking each slit.

Much the same thing can be done by putting an array of blockable pinholes all over a sheet of opaque material blocking a beam, and covering/uncovering the different pinholes while measuring what gets through. Each pinhole represents a different orthogonal spatial mode. By adjusting the timing of the covering/uncovering, the spatiotemporal statistics of a series of light pulses (in principle) can be measured.

Not the answer you're looking for? Browse other questions tagged angular-momentum polarization quantum-optics vortex or ask your own question.

2
Does orbital angular mometum has no meaning for single photons?
3
What is the likely source of these interference/noise patterns in my DIY laser micro-projector?
14
Is it possible to apply a torque without a moment arm?
0
Double silt experiment with one circular polarizer in front of only one slit in the which-way perspective?
3
What's the difference between twisted light and light of circular polarization?
3
Nature of Spin in QFT
5
Where does the photon orbital angular momentum go in light-matter interactions?
2
Can a single photon have circular polarization?
5
Changing the relative phase of two photons in an Hong-Ou-Mandel interference produces anti-bunching?
4
How to build an intuition regarding QM angular momentum?