How is a running man able to Accelerate himself?

Suppose a man is running and he gradually speeds himself up . For this he applies a force on the ground backward and the ground pushes him forward . This is probably due to to friction between the shoes of the man and the ground . The friction acting in this case is Kinetic friction which has a constant magnitude. Since the magnitude of frictional force is constant, how is the man able to accelerate himself ? Who is providing this force?

Don't think kinetic friction, just because some part of him is moving. Is it also kinetic friction if I stand still but swing my arms? Many particles in him or elsewhere might or might not move. They are irrelevant.

Only the particles in contact with the ground are relevant.

And they are not moving. His foot is not moving during the step. It is stationary and not sliding while touching. There is static friction here.

And static friction can vary easily.

Acceleration occurs when the net force on an object is non-zero. Nothing else matters. It doesn't matter if the force is constant. It doesn't matter how many forces act on the object. It doesn't matter if the object is moving the same direction as the force. As long as the net force is non-zero, it will accelerate. In this case, there are only three objects acting on the runner: gravity, friction, and the normal force. Gravity is directed straight down, and the normal force is directed straight up (assuming flat, level ground). Friction acts horizontally to accelerate the runner.

So you have a series of impulses (force $\times \Delta$time) acting on the man due to the ground which increases his momentum and velocity.

I think that the interesting fact is that for the other part of the stride the frictional force acting on the man due to the ground is actually in the opposite direction to that of his motion and imparts an impulse which tends reduce his momentum.
That is why a man can have a positive acceleration, move at "constant" velocity or have a negative acceleration.
It all depends on the magnitude and direction of the frictional force which on the mas at various phases of his stride.

You might find this article informative from which I obtained this graph which shows the force exerted on a person (including in the vertical component) when jogging. 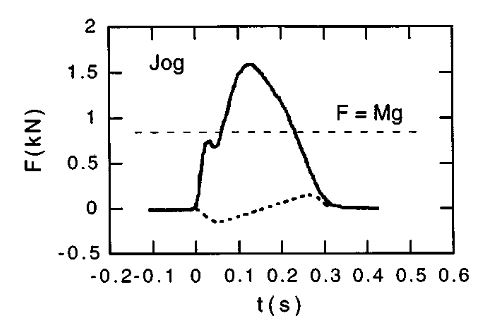 In particular note the dashed graph which shows the horizontal (frictional) forces acting on a person who is jogging which changes direction during a stride.

26
What force enables us to walk? Friction or normal reaction?

2
Nature of frictional force
1
How to identify whether the friction is kinetic or static?
0
How do we walk?
0
Friction and Motion
4
Work done walking on moving train
1
Forces acting while running
0
Why is horizontal component of reaction force while walking regarded as friction?