A spacetime is generally called nakedly singular if for some point $p \in \mathcal M$, there exists a future-incomplete future-directed causal curve $\gamma \subset I^-(p)$. But consider the following spacetime : $2$-dimensional Minkowski space $\mathbb L^2$ with a triangular set removed, of the form, given some point $r \in \mathbb L^2$ and some time $t_0$

with $\phi_t$ the time coordinate of $q$, or, illustrated, 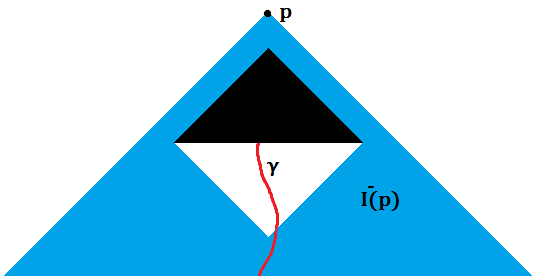 The curve $\gamma$ is future-incomplete, but the singular part will never be in any $I^-(p)$, and as such it would not fit the definition of nakedly singular, since $\gamma \cap I^-(p)$ will always be extendible.

This still feels rather nakedly singular though, as information can leave and enter the spacetime to the future of a partial Cauchy surface for $t < t_0$. Is this spacetime actually not nakedly singular? If it's not, does it not count because all boundary points are regular, and there's a spacetime extension where this singularity disappears? I'm not sure of an example with singular boundary points, does that sort of phenomenon not happen in those cases?

The first thing to say here is that although this spacetime has geodesic incompleteness, it's not really clear that we should refer to the removed region as a singularity. There is no really satisfactory definition of a singularity. Although defining it in terms of geodesic incompleteness is sort of a standard default definition, one of the main disadvantages of this definition is that it allows us to have these silly singularities formed by removing points or regions from a spacetime. There is a nice discussion of this in Geroch 1968. For example, you can take Minkowski space and remove every point with $t\le 0$, but it's hard to argue that this is a "real" singularity -- it's more like a universe in which God forms everything on the first day of creation, in 4000 BC, with fake dinosaur fossils already inside the rocks.

Anyway, if we accept the missing region in your example as a singularity, then the definition of a naked singularity that I'm familiar with is the one given in Penrose 1973. The basic idea of that definition is that we adjoin idealized points representing the boundary of the spacetime, and then the singularity is naked if such a point A can lie in both the past and the future of the same observer. By that definition, I guess we obtain the same result as with your definition, because the only points A in your example that might make it qualify as a naked singularity are the ones at the bottom corners of the black triangle. But you've defined S as an open set, so those corners are actually present in the spacetime M.

I think the basic issue here is that your M isn't a manifold, it's a manifold-with-boundary. Normally we don't do GR on a manifold-with-boundary. If we also remove the boundary of the black triangle from M, then I think by both definitions this is a naked singularity. By your definition, we can have a null geodesic that's collinear with one edge of the triangle. By Penrose's definition, we adjoin an ideal point at a bottom corner, and it can be in both the past and the future for the same observer.

Not the answer you're looking for? Browse other questions tagged general-relativity topology singularities causality or ask your own question.