Why is the graph for induced emf againt angle a sine graph for an ac generator?

I realise that similar questions have been asked on this site however these questions yielded answers which were not helpful . According to faradays law the induced emf in a conductor is directly proportional to the rate of change of magnetic flux .In the image below we see a direct motor armature , but let's just think of it to be an ac generator since it is the rotation of the armature that concerns me and not the configuration of the device . 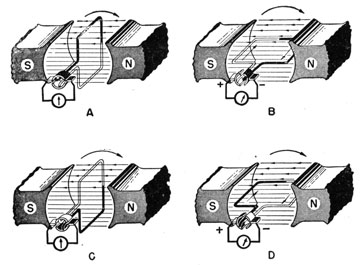 Moving from right to left . We see that in the first picture the coil is perpendicular to the flux , indicating maximum flux , let's take this to be our initial position hence the angle on our graph would be zero degrees . The induced emf is zero since we have not changed the magnetic flux with respect to time . As the armature moves to the second potion the flux has changed from maximum to minimum , indicating a large change in flux hence a large induced emf .Now as the coil moves from being parallel to the field ,back to being perpendicular again , the flux should change from being a minimum to a maximum , indicating a large induced emf , however the sine graph of induced emf against angle for an alternating current generator moves back down to being zero why is this so ? Please note I have no knowledge on angular momentum or torque .

Not the answer you're looking for? Browse other questions tagged electromagnetism electricity electromagnetic-induction or ask your own question.

2
Induced emf in AC generator
0
How is this the graph of induced emf against angle for a rotating coil in a magnetic field?
0
Is Emf induced in the coil when magnetic Flux passing through it is zero? If so then what is the explanation?
0
Will the graph representing the induced e.m.f be a cosine graph if the surface for magnetic flux has been changed?
1
Calculating the accurate emf of an electric generator
0
Why is an emf induced in a coil when it is not moving perpendicular to magnetic field?
0
Why (physically not mathematically) is the induced EMF of a rotating coil the negative derivative of the graph for flux?
0
Flux and emf induced graphs when magnet is dropped through a coil
0
Will there be any induced EMF?
1
What does the back EMF graph of a DC motor look like? Shouldn't it be oscillating like the output voltage of an AC generator?