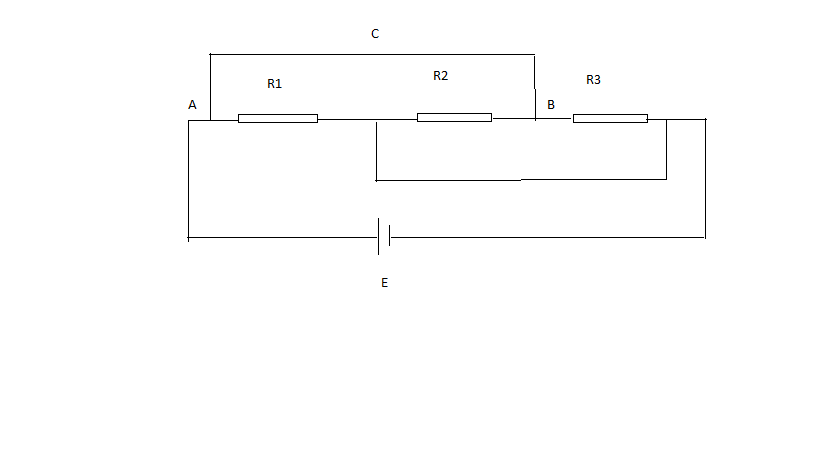 Though there looks to be a short circuit in this diagram, my teachers say that this circuit can easily be redrawn into simple parallel circuit. As far as I know a short circuit is an alternate way for current to move where there is no resistance whatsoever. So all of the current will flow through a short circuit if found.

Here if the current flows through that part of the wire ACB then after that R2 and R3 being the same it will get confused which way to go and even if it goes both sides then some part of the current is bouncing back and moving from the negative side of the cell to the positive. This is just a conjecture.

This is correct. The part that seems to be confusing you is that this isn't a short circuit.

As stated in the other answer, you have shorted the circuit between A and B using wire C; it will pass around R1 without issue.

Once you reach B, the current is no longer free to move without encountering a resistance. This means that the whole circuit is not shorted.

Comparing it to a circuit without wire C, you could say that C has shorted R1 and R2; but the total circuit has some resistance and is therefore not a short circuit.

It's only a short circuit if it can travel through the entire loop without encountering any resistance.

I believe this may also depend on the terminology you choose. It's very common to say you've made a "short circuit" between A and B; but I can see the logic behind saying the entire system itself is not a short circuit.

It is best to label all the nodes. 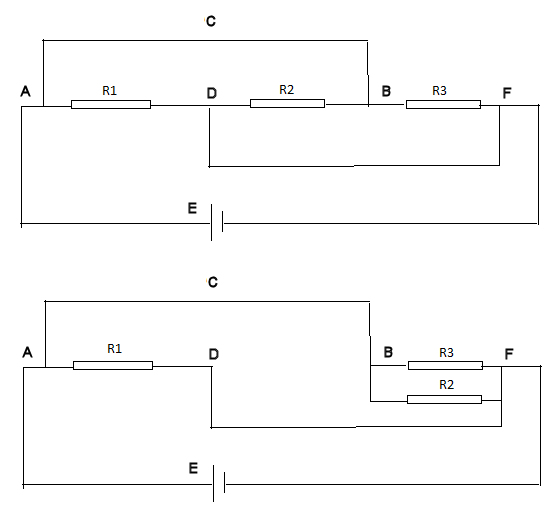 All the wires are doing is ensuring certain parts of the circuit are at the same potential.
If wire $C$ was not there you would only have current flowing through resistor $R1$ and likewise if wire $DF$ was absent current would only flow through resistor $R3$.
In both cases the remaining wire would be a short circuit across two of the resistors.
As drawn currents flow through all the resistors.

Therefore, the circuit is equivalent to the circuit where $R_2$ and $R_3$ were connected to point $A$.

With similar reasoning, you can do the same for the rest of the short circuit wires and obtain a simple parallel resistors combination.

0
How does Ohm's law relate to transferring energy?
0
Open Circuits vs. Charging a Capacator
0
Short circuit due to loose terminations
0
Current in parallel circuit and short circuits
0
Adding a “short circuit,” changing currents
2
Why does the LED turn off if the high current is going through the short?
0
Science of Short Circuits