I'm racking my brain over what should be a simple problem in special relativity. Consider the angle $f$ between two stars, as measured by a an observer at rest:

So in the first case, the observer measures the stars to be $f'$ apart, but in the second case, they appear to be $f$ apart. What am I missing??

Moving observer can explain displacement of apparent position of the source by aberration of light, and an inertial observer "at rest" can explain the same effect by light - time correction.

RELATIVISTIC ABERRATION - OBSERVER IS "IN MOTION" HIMSELF

"How nice, indeed—except for one little thing: $\theta'$ is not the angle at which we would have to set the telescope relative to the earth, because we made our analysis from the point of view of a “fixed” observer. When we said the horizontal distance is $vt$, the man on the earth would have found a different distance, since he measured with a “squashed” ruler"

An observer measures with squashed ruler and measures greater distance! Have you ever heard, that in Special Relativity an observer would measure greater distances since his own measuring rod really contracts in his frame? These effects in SR are kinematical due to the same synchronization procedure by each observer. Apparently Richard Feynman was a supporter of Lorentz Ether Theory, which explains null - result of MM experiment by real contraction of one of interferometer's shoulder.

Indeed, the faster an observer moves, the more relativistic aberration forces him to tilt his telescope into front, almost until $\pi/2$ ($\arcsin v/c$). The diagram and formula below (we plot angles from abscissa axis there) show, that distance to the star from the point of view of moving observer does not contract, but stretches! 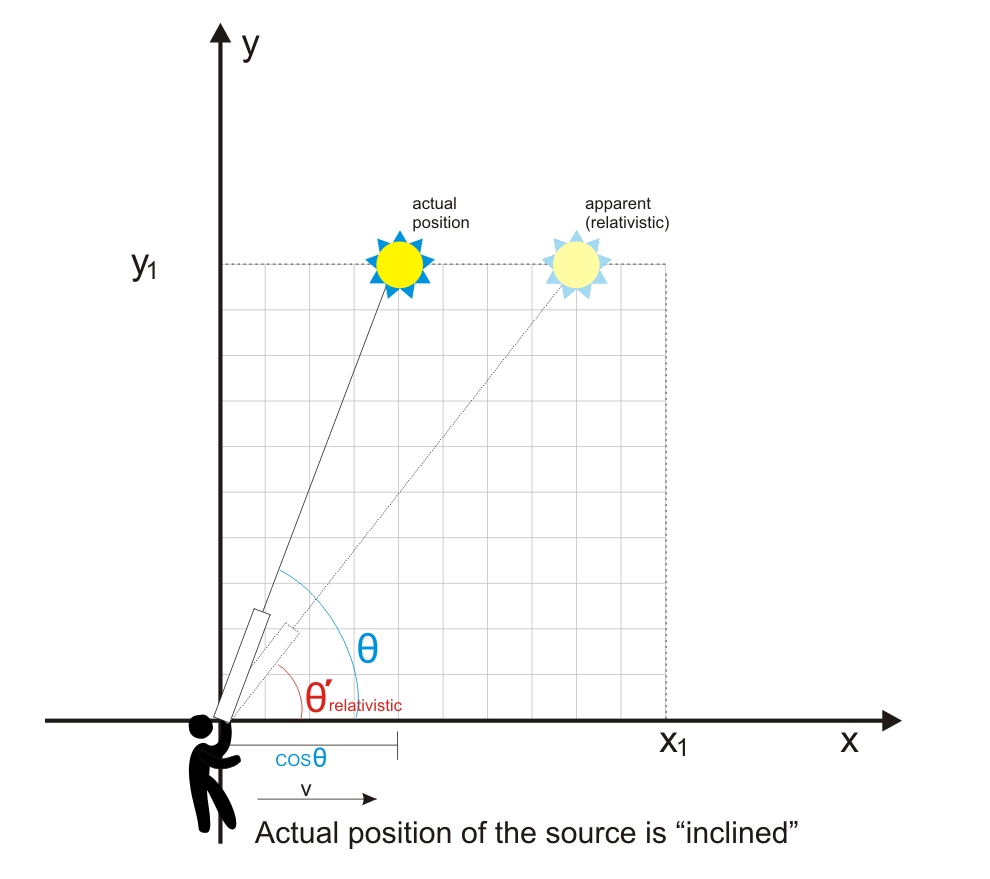 Quite often people think, that in Special Relativity observer "at rest" and moving observer measure that they shorter and slower each other. This is not entirely correct. Only observer "at rest" measures, that moving clock dilates and measuring rod contracts.

Please look, how Feynman derives Doppler effect in the same chapter of his lectures. Please start with: "Suppose, now, that the source is standing still and is emitting waves at frequency $\omega_0$, while the observer is moving with speed $v$ toward the source".

According to Feynman, moving observer sees that processes in the reference frame of the source run faster, because he dilates himself. Maximum frequency should be $2\omega_0$, but it approaches infinitely large value, since observer dilates himself when approaches velocity that close to that of light. Since he turns into dawdler, all processes around him appear running very fast.

Interesting to note, that A. Einstein in his 1905 paper in chapter 9 considered relativistic Doppler Effect from the point of view of an observer, who moves himself in the reference frame of the source. If we insert $\varphi = \pi/2$ we can see that this observer will see purely Transverse blueshift $\nu= \gamma \nu'$.

This video demonstrates how aberration changes Transverse frequency shift when observer either "moves" or "at rest". The faster observer moves, the greater is aberration angle at which he must tilt his telescope: https://www.youtube.com/watch?v=hnphFr2Iai4

Moving observer (I emphasize - moving) sees, that measuring rod "at rest" appears longer and a clock "at rest" ticks faster. Since we move ourselves on the Earth orbit, due to aberration of light we tilt telescope into front. If we will look at distant star or clock at the zenith, we see that it changes position and is ticking faster(radiation blueshifts), than our own clock.

Existence of aberration of light forces us to acknowledge, that observer can move himself in the reference frame of the source.

EDIT: If observer conducts measurements by means of synchronized clocks, the articles below vividly demonstrate, that even if measuring rod of moving observer is really shorter that the same "at rest" and clock is really slower that a clock "at rest", if he synchronizes clocks by Einstein signalling method in his frame, he will see that vice versa - the rod "at rest" is shorter and the clock "at rest" is slower than his own.

Chapter 7 Simulation of the Symmetry of Relativistic Effects https://arxiv.org/ftp/arxiv/papers/1201/1201.1828.pdf

LIGHT TIME CORRECTION - AN INERTIAL OBSERVER IS "AT REST"

An inertial observer can also look at the problem from the "stationary point of view" - the star moves in his frame. In this case he will explain difference between actual and apparent positions of the source by light - time correction. In this case the star will be blueshifted due to mix of Transverse and longitudinal components of Doppler shift.

The more the source "inclines" towards the horizon, the bluish will be its radiation.

Hence, displacement of apparent position of the source has different explanation in different frames. Something like that: https://www.youtube.com/watch?v=FQKp3FU8vR8

However (and quite important) to note, that an observer who rotates around a source of light (the source can be at any point of an axis, which goes through the center of circumference and is at normal to the plane of rotation) can explain displacement of the source only by aberration of light in that form as we know it since Bradley - due his own motion on the orbit and hence by contraction of "himself".

Good to mention, that an observer (in theory) can also know where is actual position of the star (or source), since there is aberration of light (or light time correction) but there is no aberration of forces. http://www.mathpages.com/home/kmath562/kmath562.htm

Not the answer you're looking for? Browse other questions tagged special-relativity astronomy or ask your own question.