Why wouldn't a balloon suspended in an accelerating truck not move? [duplicate]

Now, the balloon should move forward as the air would be pushed backwards creating the higher pressure at the back. But the answer suggests that it won't move. How is that possible?

The answer is that if you accelerate, the balloon will go towards the front of the truck. This is the well known balloon in a truck problem and it has to do with displacement of air and bouyancy. When you accelerate, the air is at rest and so goes to the back of the truck. This creates a pressure gradient which causes buoyant forces in the horizontal direction. Since Helium is lighter than air, the buoyant force pushes the balloon towards the front.

What happens depends on the ratio of the densities of the air filled in the balloon and the air outside the balloon.

As the higher pressure is at the back side of the truck, the buoyant forces will be operating in in the back to front direction.

How does it move depends on which forces wins: the buoyant force or the pseudo force.

Let the box shown below represent the truck.

Let $\theta$ be the angle between the string connecting the balloon to the ceiling and the normal draw from the pivot (as shown in the figure).

Let $T$ be the tension in the string connecting the balloon to the ceiling.

Let $a$ be the acceleration of the truck.

Let $m$ and $V$ be the mass and volume of the balloon. 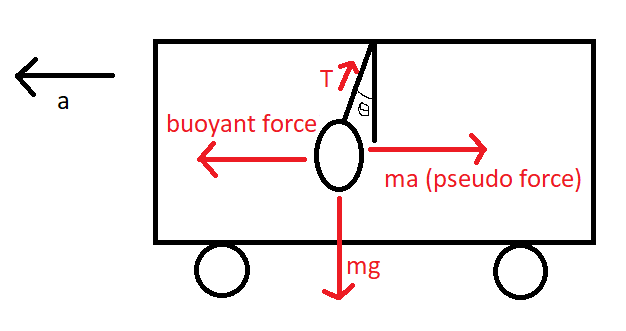 We will solve the problem from the frame of reference of the truck. As such a frame is non-inertial, a pseudo force in the direction opposite to that of the acceleration will be acting on every object.

We can write the force equations in the two components (x-axis and y-axis).

As the balloon does not fall down or rise up, the vertical component of the tension must completely cancel the weight.

After a some time since the truck started accelerating, the balloon would have reached an equilibrium position. The net force in the horizontal direction is therefore zero.

The sources of force in the horizontal direction are pseudo force, buoyant force and the tension in the string. After accounting for the direction of the aforementioned forces, we obtain the following equation:

Isolating $\tan \theta$ on one side, we get:

Further analysis will reveal that:

balloon does not move

116
Why does a helium filled balloon move forward in a car when the car is accelerating?

116
Why does a helium filled balloon move forward in a car when the car is accelerating?
2
Why does water not propel a balloon?
1
Question about a crate in an accelerating truck and friction force
0
Why is it that despite there being a higher force, objects sometimes don't accelerate as much?
0
Fan in a sealed box