How does the size of the slits (apertures) affect the detected pattern in single and double slit particle interference experiments?

If you emit an electromagnetic wave with visible light frequency toward a single or double slit or aperture opening you get an interference pattern that depends on the ratio of the width or radius of the openings and wavelength of the wave in the electromagnetic field. 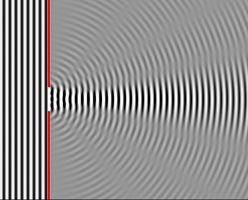 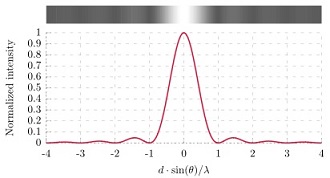 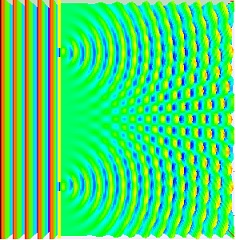 In cases when you fire single photons like eraser and delayed eraser experiments (whether or not the photons position information is 'exposed' or not) does the detected pattern depend the same way to the relation between the photons wavelength and opening size? Is there a similar relation to the openings size and all bosonic particles, fermionic particles, atoms and molecules minimum uncertainty wave packets size in double and single slit interference experiments?

In 2003, A. Weis and R. Wynands at the University of Bonn (Germany) designed a lecture demonstration experiment of single photon interference from a double slit . Light from a laser pointer was so strongly attenuated that at each instant there was only a single photon between the double slit and the detector. The diffracted light was recorded by a single photon imaging camera consisting of an image intensifier (multichannel plate, MCP) followed by phosphor screen and a CCD camera. When adding consecutive camera frames one sees the gradual appearance of the smooth classical interference pattern (Fig. 1). This demonstration thus nicely illustrates the continuous transition from the quantum picture of light to its wave interpretation

The image on the right is the classical interference pattern.

Single electron experiments show the same cumulative effect. The sinusoidal behavior depends on the de Broglie wavelength, have a look at this answer of mine here..

so a wider slit width $d$ will cause the diffraction peaks to move closer together.

In double-slit diffraction, the width of the slit is typically taken to be negligible compared to the separation $D$ between the slits. The angular position of the maxima in double-slit interference is given by

so a wider separation means closer interference peaks. In addition, there is a 180-degree phase shift in the angular position of the interference pattern as compared to single-slit diffraction.

Interference effects can be observed in any particle that considers the wall in which the slits are cut to be opaque. So a neutrino beam, which doesn't interact with the wall very much at all, would exhibit essentially no interference pattern.

Not the answer you're looking for? Browse other questions tagged particle-physics diffraction wave-particle-duality or ask your own question.