Can two electrons never touch each other?

Although this is quite an old question, I have to disagree with answer by Luboš.

First, Pauli exclusion principle says that no two fermions can share the same state. But, if the electrons have different spins (i.e. are in so called spin-singlet state), then they can be in the same positional state.

Next, indeed, in classical case, two charged particles with equal signs cannot touch, because their potential energy $\sim1/r$ will go to infinity at the collision point. But, as electrons are quantum particles, they obey uncertainty principle, which allows them, in particular, to tunnel to classically restricted locations. To more precisely describe their motion, one has to use Schrödinger equation.

Suppose two electrons with different spins are in a parabolic 3D potential well, while interacting by Coulomb force between each other. Schrödinger equation for them can be simplified by separation of variables*. Then the part for inter-electron wave function would look like (neglecting dimensional constants):

The boundary conditions for $\phi(r)$ are boundedness at $r=0$ and $r\to\infty$.

Solving** this equation with $l=0$ (otherwise electrons won't touch because of centrifugal force, which grows faster than Coulomb force), we get the wavefunction for ground state: 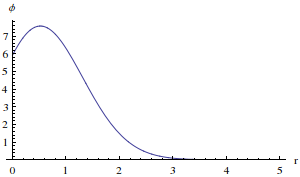 As you can see, the wavefunction doesn't go to zero at $r=0$. Neither will it vanish for excited $S$-states (i.e. excited states with $l=0$). Instead, there's a cusp with a local minimum of probability density at the point of collision. Were the potential to go to infinity at a higher rate, like $r^{-2}$, the wavefunction would indeed vanish at that point. This is what happens for $P, D$ and other states with $l>0$.

* See the (paywalled) article for details on separation of variables.
** I solved it via Frobenius method, limiting to 1000 series terms. I'm not sure if there's a closed-form solution for this BVP.

Yes, two electrons or two charged particles are not allowed to overlap – the interaction energy goes like $1/r$ so it would diverge in the strict limit and the world doesn't have the infinite energy to do that. Two electrons are forbidden to overlap for another reason, the Pauli exclusion principle.

On the other hand, two particles of opposite signs attract by a force that goes to infinity in the $r\to 0$ limit, too. Nevertheless, even in this case, they won't end up overlapping due to the uncertainty principle of quantum mechanics.

For example, take the hydrogen atom (or any atom). The electron can't sit exactly at the nucleus even though it would save an infinite amount of energy. The reason is that a very low $r$ implies a very low $\Delta x$ of the same order and, therefore, a high $\Delta p \geq \hbar / \Delta x$. A high $\Delta p$ means a high average $\Delta p^2$, and therefore high kinetic energy, and this one actually wins if the proton-electron distance is too short. If the electrostatic force increased faster than $1/r^2$ at short distances, one could actually beat the kinetic energy and oppositely charged particles would choose to sit on top of each other.

Not the answer you're looking for? Browse other questions tagged electrostatics singularities pauli-exclusion-principle or ask your own question.

129
What does it mean for two objects to "touch"?
10
Are Newtonian forces real forces or just a useful construct?
9
Why do electrons in singly occupied states have parallel spin?
3
Pauli’s exclusion principle
2
Do electrons in the same orbital but different spin feel each other's Coulomb repulsion?
1
Solving for $r=0$ in an inverse square law
1
Distance can be zero