I'm a helicopter pilot with limited physics knowledge (units in BSc and HNCs).

I have recently challenged an assertion that rotating blades are stiffened by centrifugal force. In My mind, stiffness refers to the resistance of a member to bending deformation, K. From the comments, perhaps this is my problem?

A more accurate statement might be that the "blade resists the bending moments since counter-moments are exerted on them arising from the centripetal and aerodynamic forces".

I am very happy to be wrong (since I then learn) but I am catching a lot of heat for this challenge and no-one on Aviation.SE has been able to explain why I am wrong.

I do understand that there is a certain amount of pendantry in my claim but precision, particular in answers on the stacks, is part of my motivation.

For simplicity, let's model the helicopter blade as a simple massless beam with a point mass at the end. When there is no gravity, the beam will be straight.

We now introduce a force to the beam tip, which will cause the beam to deflect. The bending stiffness $k$ is equal to the ratio of the force to the deflection: 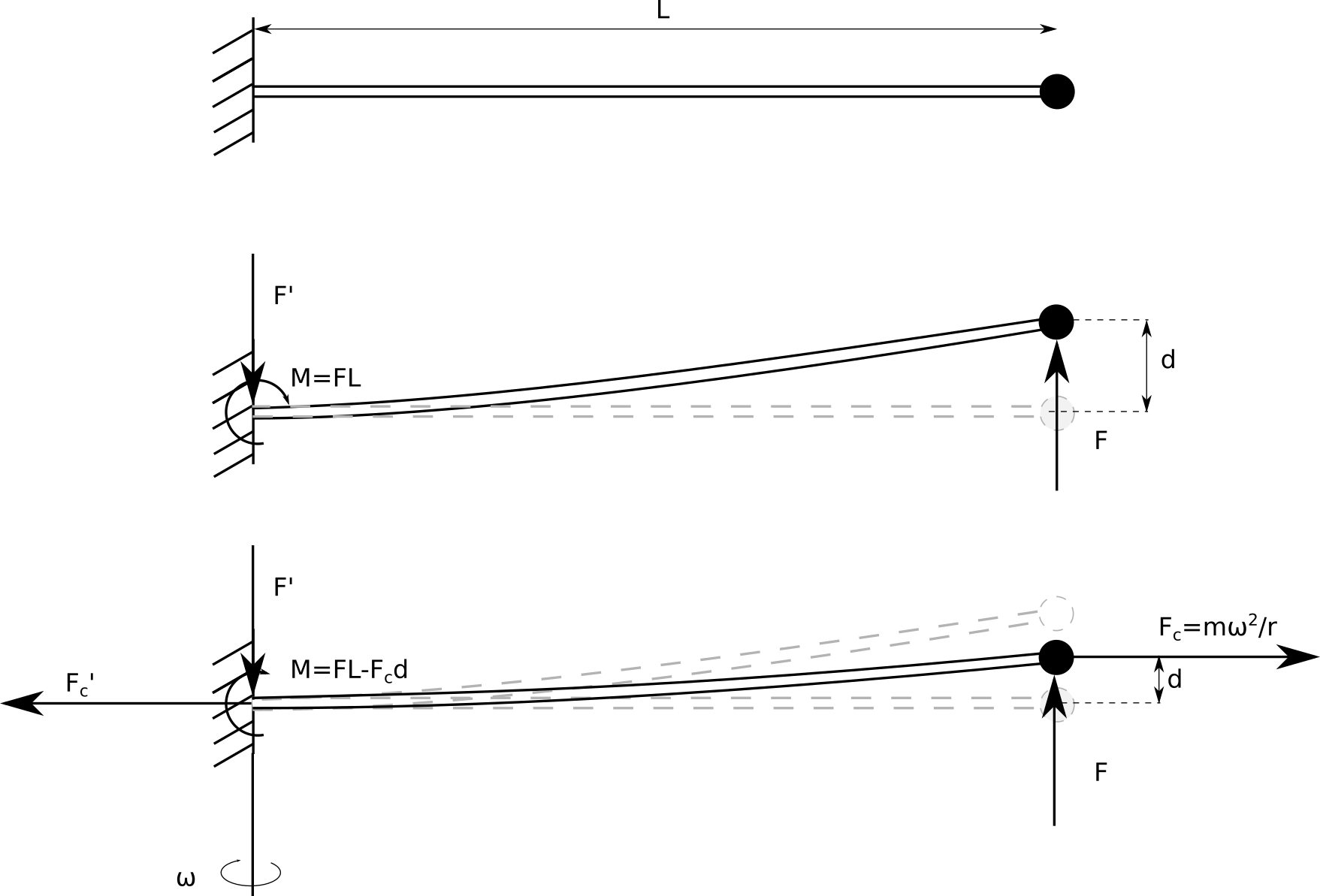 When we now put this beam in a rotating reference frame, like the blade of a spinning helicopter rotor, we have to introduce a centrifugal force on the mass to account for the constant acceleration of the beam tip. When the beam is deflected upward, the centrifugal force will cause a downward bending moment and hence the beam will deflect less than in the scenario without the rotation.

The problem with that statement is that you have an over-simplified concept of "stiffness". In general, "stiffness" is simply the slope of a graph of "force" against "displacement".

For a rotating object, you can decompose the stiffness into three different components:

The stress stiffness and load stiffness both depend on the RPM - in fact they are proportional to the square of the RPM. These effects can be large. For example, the first natural frequency of a large jet engine fan blade may increase from about 30Hz when the engine is not running, to maybe 75Hz at top speed - which is equivalent to the stiffness increasing by a factor of 6 times or more because of the RPM. (Those numbers come from my "day job" - I don't know the comparable figures for a helicopter rotor, but I would imagine they are the same general order of magnitude, or even bigger.)

For a rotating blade, the load stiffness can either increase or decrease the stiffness, depending on how the blade deforms. The diagram in DeltaLima's answer shows one situation, where (assuming the rotor is spinning in a horizontal plane) the deflection is vertical. The "centrifugal force" still acts in the horizontal direction, but at a different height above the hub of the blade. That creates a bending moment which is trying to bend the blade back down again - i.e. it increases the stiffness.

On the other hand, if the blade moves in the tangential direction but stays in the same horizontal plane, the "centrifugal force" is now acting radially away from the blade hub, and that force is trying to bend the blade further in the tangential direction - i.e. it decreases the stiffness. One reason for the blade to bend tangentially would be when the rotor is accelerating or decelerating, and the blades either lag behind (accel) or get in front of (decel) the position of the hub. In a helicopter, the cyclic control will have a similar effect as the blades alternate between the "upwind" and "downwind" halves of each rotation.

Note, the previous two paragraphs only discuss the load stiffness caused by the "centrifugal" forces acting on the blade. The aerodynamic forces create other load stiffness terms, which are not negligible - but this answer is getting too long already!

The potential decrease in stiffness is more significant for a rotor with a larger diameter "rigid" hub - for example a jet engine fan or even more so a typical compressor or turbine rotor with "short" blades on a "large" disk, compared with a helicopter or wind turbine rotor. For rotors with that type of geometry, it is quite common for the vibration frequency of different vibration modes to increase, decrease, or stay the same as the RPM varies.

Rotation does not change the stiffness, but it does reduce the bending of the rotor since it counteracts the lift as far as bending moment is concerned. 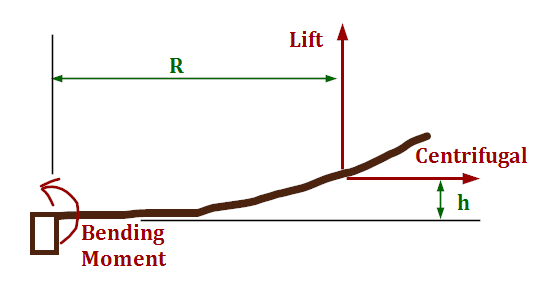 So the bending moment (causing stress on the blades) is

As you can see the higher the centrifugal loading the less the overturning moment. In reality, the flexing $h$ varies rapidly as the blade rotates around due to the varying lift amount.

Let's start with how you are considering stiffness

In My mind, stiffness refers to the resistance of a member to bending deformation, K.

And this is essentially all it is. I believe your confusion comes from the application of material properties when it comes to stiffness.

To quote the Wikipedia article on stiffness:

For situations like a bending beam; the stiffness equations will be different; and will depend on things like where along the beam the force is applied (and how the force is distributed), what the end conditions for the beam are, etc.

Most analysis I am familiar with is static; so I can't really go into examples with dynamic components (such as your blade); but if the movement is making it more difficult to bend; then it is by definition more stiff. The mechanical analysis of why inertia contributes to the increased stiffness is outside the scope of what I feel comfortable with.

Unlike the root of the wing of a fixed wind aircraft, the root of a helicopter blade is either hinged, or made flexible. The hinge has limits on its travel so the blades do not fall to the ground when stationary.

The fact that is it hinged means that the blade does not act as a beam, but as a tie. In operation the axis of the blade is aligned to the resultant of the forces acting on it. Were it not for the need to apply torque to the blade from the hub, you could make it from weighted string with an aerofoil cross section and the first-order physics would be unaffected.

Consider a Blackhawk, which has a fully articulated rotor.

I originally queried the answer in the other place for logical gaps rather than the conclusion - for example, saying the blades were not strong enough because they droop when on the ground. They do droop, but not significantly more so than the wings of a glider or even a B-52S with full tanks do, especially considering the articulated root.

The blade is articulated at the root. If the centre of lift is the centre of mass, then the moments cancel and blade will fly at an angle of arcsin(25/480) = 0.052 rad or 3 degrees.

So the rotor can work without needing to be rigid at all. The blades can flex and align to the net of the lift and rotational forces, so do not need to be stiff to function. The string on a round-the-pole flying will exert a force upwards on the pole if the plane is above it, if you had two or three of them then you could balance out the horizontal forces and the pole would take off:

As for the blade, as it is articulated at its root the forces should act along the axis of the blade and not make it any stiffer, but along it there will be uneven forces so it will be fluttering a bit, and (just like the string on the flyer twangs at a higher note as it goes faster) the effective stiffness under that fluttering will be increased by the rotation.

As to whether the blade would break if statically loaded on the ground, 110kg of blade over 7.8m gives 14 kg/m, assuming half of that is a structural tubular spar.

Using http://www.tech.plymouth.ac.uk/sme/desnotes/buccalc.htm and http://www.amesweb.info/StructuralBeamDeflection/CantileverBeamStressDeflectionCalculator.aspx with a point load of 25kN half way along exceeds the yield strength by a factor of four or so - 1940 MPa.

The force acting along the blade of 500kN in an area of 2200mm2 gives 230MPa, which is less than half the tensile yield strength of such a spar.

So the original answer was mostly correct, but badly phrased - the important effect is that the rotational forces set up in the blade cause it to act like a tie rather than a beam, rather than meaning it is a more rigid beam. . If similar forces were exerted on the blade as are found in flight, it would not break. If the blade were used as a tie to support the aircraft, it would not break. The is stiffness gained, but that will affect flutter response rather than whether or not it fails. The fact that the blades or wings droop does not reliably indicate whether they can support the weight of their aircraft without being rotated. If you used the blade as a cantilever beam to support the helicopter it could indeed break if the support was more than a little way from the root.

0
Why Doesn't Centripetal Force Counteract the Deflection of a Blade?