In experimental particle physics, when analyzing data from some experiment we require a baseline event selection by applying "cuts" on kinematic variables such as the pseudorapidity $\eta$, transverse momentum p$_T$,...

My question is to check if I understood correctly and have if possible complementary information:

The choice of the numerical values of these variables are based on (or limited by) the following arguments :

Is this correct? are there other arguments?

In experimental particle physics, when analyzing data from some experiment we require a baseline event selection by applying "cuts" on kinematic variables such as the pseudorapidity η, transverse momentum pT,...

Yes, there is a hierarchy of cuts and it is under control, because of the Monte Carlo generated events which allow to calculate the effect of the cuts.

Depending on the channel studied, other cuts may be necessary , like isolation , number of leptons, existence of photons etc , depending on the channel that has to be cleared of background. All these depend on the objective of the study, and the cuts are decided by the use of the Monte Carlo events, with and without the sought for signal.

The unearthing the Higgs signal in various channels from the background is a good case study.

Monte Carlo is a computational method of generating particles according to specific kinematics and cross sections assumed for the production of particles from the known physics up to now. In the LHC case the event generators have the functions dictated by the standard model. Then the ideal event tracks/particles are passed through the detectors, with new monte carlo simulations of absorption and interactions so the end result is an event as it will come out in the real data. These simulated events are used to decide on the triggers and what cuts are necessary to clean up and reduce the background "noise" events for the channel of interest, as the basic interactions are known . Then one can have a background (given by the monte carlo events) over which new physics can appear, as is the case for example in the Higgs to two gamma plot. 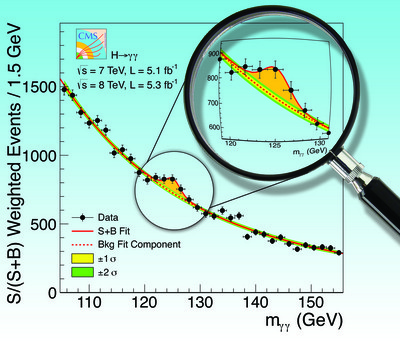 What is called a "background fit component is the result of doing the analysis on the MC simulated events. Once a signal is seen it can be fitted with the appropriate function + the background (S+B).

Selecting the range to be included or excluded by a cut is a common problem in data analysis and accordingly is driven mostly by the combination statistics (attempting to optimize the final errors) and the need to be able to show correctness (you must be able to show that the result is not an artifact of the cut limits you use).

A Monte Carlo is often used to assist in this determination because in simulation you can know the actual answer and thereby check that the analysis is not distorting the data, and evaluate any contribution to the uncertainty from the analysis procedure (as well as any bias introduced by the procedure).

Not the answer you're looking for? Browse other questions tagged particle-physics experimental-physics kinematics large-hadron-collider or ask your own question.