You've got a book on the table. It's got a gravitational force acting downwards. This is the force on the book by the earth. Apparently there is an equal and opposite force on the earth by the book.

And then another massive question: If everything has equal and opposite forces on each other then how can there be net forces? Seriously that is pretty weird. For example when you push a cube with a non-constant velocity along a horizontal plane then there are net forces which is confusing because according to the third law there are equal and opposite forces on every interaction.

Update: Thanks for all the good answers guys but I am still low key really confused so I hope you don't mind if I don't accept anyone's answer as of yet. The quality of your answers are great but I just want to make sure I understand these concepts 100% before I resolve my issue

There is a reaction force to every force exerted, yes. Just remember that you are talking about another object then.

When setting up Newton's 2nd law, always look at only one object/system at a time. 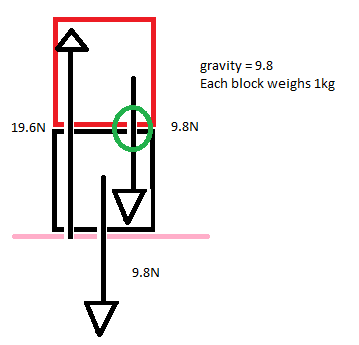 The red box pushes the black box by the normal reaction not by its weight.

The main concept you have to keep in mind here are the following:

To think that normal and weight form an action/reaction pair is one of the most common misconception among fresh students in physics. By the statement above you conclude that the normal and gravitational forces acting on the book or in the walking person cannot form an action/reaction pair since they act on the same body. By the same reason, we see that it is perfectly possible to have net forces on a body.

Let me try to explain at least one of your questions, the one about the equal and opposite forces. Firstly, if you are super heavy and fall through the floor, that does not mean that suddenly there is no reaction force. This simply means that your weight is so large that it has exceeded the tension limit, or yield strength, of the floor, and the floor has essentially 'snapped' because it could not support the force you were exerting on it any longer.

Now, let us consider this image. These two identical people are pushing against each other on identical carts with identical wheels on perfectly even ground. Neither of them will be able to move, due to the reaction force they each exert on one another.

Now, let us consider this second image. There are two different situations depicted here, however the forces between the girl and the ball are the exact same. In the first one, the girl throws the ball, and the ball pushes back on her hand, but the friction of her shoes on the ground stops the reaction force from actually moving her significantly. On the other hand, when she wears rollerskates, there is no friction to hold her in place, which is why the ball does actually move her backwards.

And this is why things do move even though each force has an equal and opposite reaction force: because although each individual force has a reaction force, there are still other forces acting upon the objects in question (something which is often simply ignored in physics questions due to the complexity of many different forces being involved). This is what makes all the difference. For example, if friction didn't exist, we couldn't push even a 1g ball, because it would simply push us back with equal and opposite force.

0
What is the reaction force of the normal force when I push a wall?