A dumbbell rolls down a slope, what happens when it touches the ground?

As in the title, our Physics teacher gave us this brain teaser after learning introductory motion. "If I have a dumbbell [with bigger weights than handle] that is rolling down an incline with only its handle rolling (the weights are hanging off the sides of the incline), what would happen to it's speed when it tocuhes the ground and keeps rolling? Does it increase, decrease or stay constant?"

At first I thought the answer was simple, it would decrease in speed as it would expend energy during its impact with the ground (I don't think this is a valid reason though). However, the teacher later gave the explanation that the dumbbell would in fact increase in speed as when the handle was rotating, the weights would be rotating at the same speed and thus when it impacts, the weights which have larger circumference would have the same rotations/min as the handle (which has a smaller circumference) and thus as it is larger, with the same rotation rate, would increase speed. This satisfied me until I heard rumors that the teacher (who enjoys being messing with students) said that the speed remains constant and was lying in class.

I am confused on the real answer, so I would really appreciate some concrete answers.

When the dumbbell hits the ground, there's going to be a frictional force on the dumbbell pointing to the right. The net effect of this force is to create an impulse, $\Delta p=F\Delta t$. After this impulse, the dumbbell is again rolling without slipping. 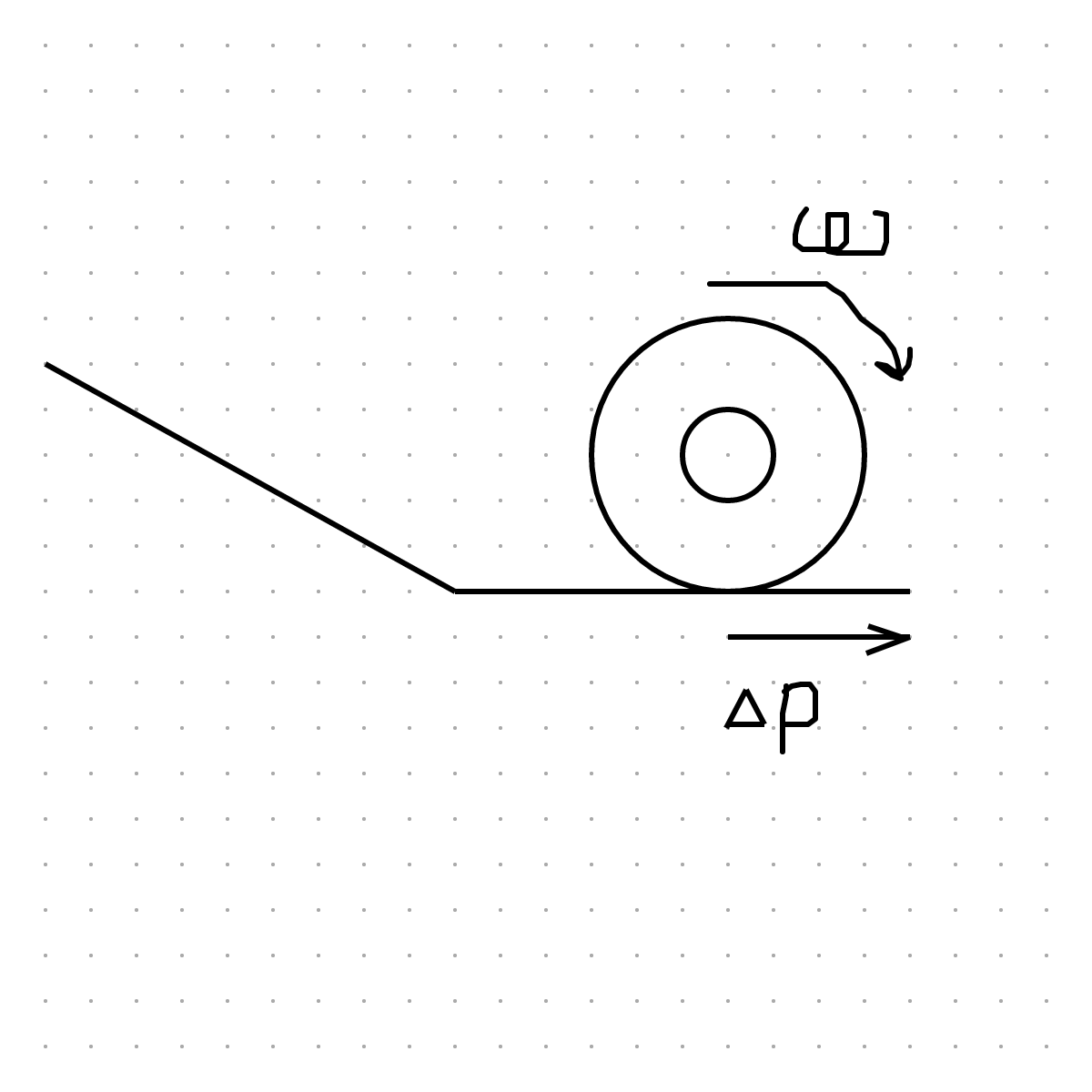 We know from Newton's second law that $$ \Delta p = mv_+-mv_- $$ This force also creates a torque. Since the force acts on the edge of the dumbbell, we know that $\Delta L=R\Delta p$. Thus,

Of course, you could also predict the dumbbell sped up just from the diagram I drew. The direction of the frictional force clearly points to the right, which means that the center of mass of the dumbbell will accelerate to the right, speeding up. But if you want to know how much it will speed up by, you have to do the math!

Note that if you do the math, you'll find that while $v_+>v_-$, $\omega_+<\omega_-$. So the rotation slowed down--it just didn't slow down enough to make $v_+$ smaller than $v_-$. And note that there WAS energy lost in this collision; it just wasn't enough to make $v_+$ smaller than $v_-$. It decreased the rotational kinetic energy, but still increased the translational kinetic energy. So all of the explanations you got were wrong. It doesn't slow down (although it does lose energy!) and it doesn't rotate at the same speed as it was rotating before (although it have a larger velocity!).

where $M$ is the mass of the dumbbell and $J$ its moment of inertia.

However, considering that the dumbbell rolls without sleeping before and after the collision, we get the following kinematic constraints:

where $r$ (resp. $R$) is the radius of the handle (resp. the weights). Finally, the first equation becomes

You could wonder why I stated that the collision is elastic. First of all, using a not so inclined plane, you can reach any speed while losing a very low amount of energy during the collision, so it seems reasonable to consider that the energy loss is negligible, compared with the energy transfer between kinetic and rotationnal energy. Secondly, by using different materials for the slope and the dumbbell, different speed or by changing the inclination of the slope, one can achieve to lose almost all of the energy of the dumbbell during the collision: for the problem to have a solution, the collision must be elastic (or at least not too much inelastic).

1
What is the friction between cylinder and wall (ground)?
3
How can angular velocity be constant even when there is a torque by friction?
1
Gymnastics angular velocity help
2
Cylinder vs cylinder of double the radius roll down an incline plane, which one wins?
2
Center of wheel travels the length of circumference in one revolution