How does reaction torques affect the angular acceleration of motors? 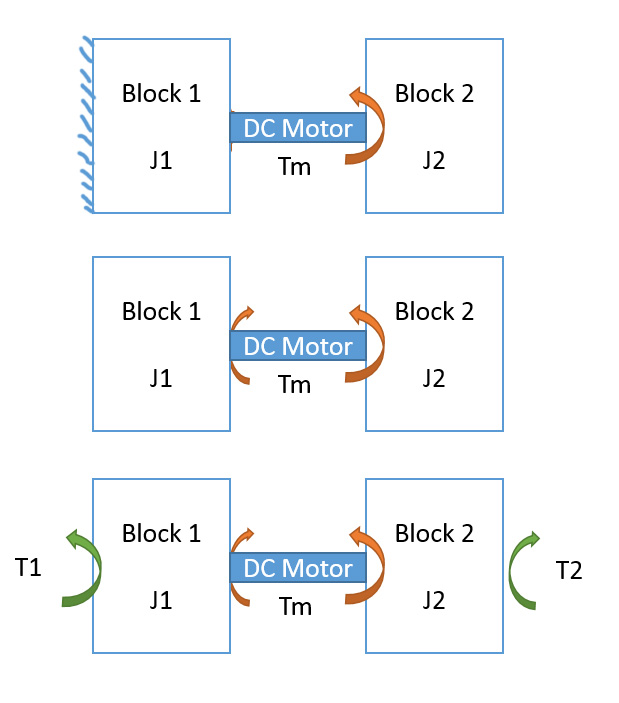 Lets say we have two blocks, each of moment of inertia J1, J2, and attached to each other is a DC motor along a shaft. The DC motor has a rated stall torque of Tm. Lets consider instantanous angular accelerations at zero initial angular velocities, so the motor outputs its full torque without back-emf effects.

Case 1: If Block 1 is fixed to the ground, the angular acceleration of block 2 is Tm/J2. This is the case we are most familar with.

Case 2: If this assembly is floating in deep space, what are the angular accelerations of both blocks. Is the acceleration of block 1 Tm/(2 x J1) , and of block 2 Tm/(2 x J2)? Lower because there is no reaction torque from the fixed mount as in case 1. How is the torque distributed between the two sides? Does it depend on the values of J1 and J2?

Case 3: (assembly is floating in deep space) If we add a resisting torque on the blocks 1, I would imagine block 1 accelerating slower, while block 2 accelerating harder. Its like how you squeeze the shaft of a mini motor and the whole base starting spinning around, it seems more torque is transferred to block 2. What is the general equations of angular acceleration? given the motor and the 2 resisting torques added.

Conservation of angular momentum tells you that for case 2, $J_1\alpha_1=J_2\alpha_2$, where $\alpha$ is the magnitude of angular acceleration. Therefore your guess in case 2 is incorrect. We must have $\alpha_1=T_m/J_1$ and $\alpha_2=T_m/J_2$. The two accelerations shall have opposite sense.

5
How do I visualize the non-coaxial rotation of this device?
4
If a pendulum is on a rotating table, will a torque be generated?
0
How do i calculate the linear acceleration of a body with 2 opposite torques on it?
1
How does precession affect angular momentum?
0
Pulleys and rotational motion problem
4
Every action has an equal and opposite reaction. Is is true for torques as well?