How can a full moon be seen south of an observer's location?

I know this seems like a simple question, but I'm trying to debate with a flat earth theorist. I asked him to explain why can the ISS visibly be seen orbiting the Earth with the naked eye, and he put this question to me instead.

"How can a full moon be observed south of an observer's location, despite the fact that if the moon is illuminated by the sun, an observer has to be almost directly between the sun and the moon to observe a full moon?"

Here is a picture that may help in describing this. 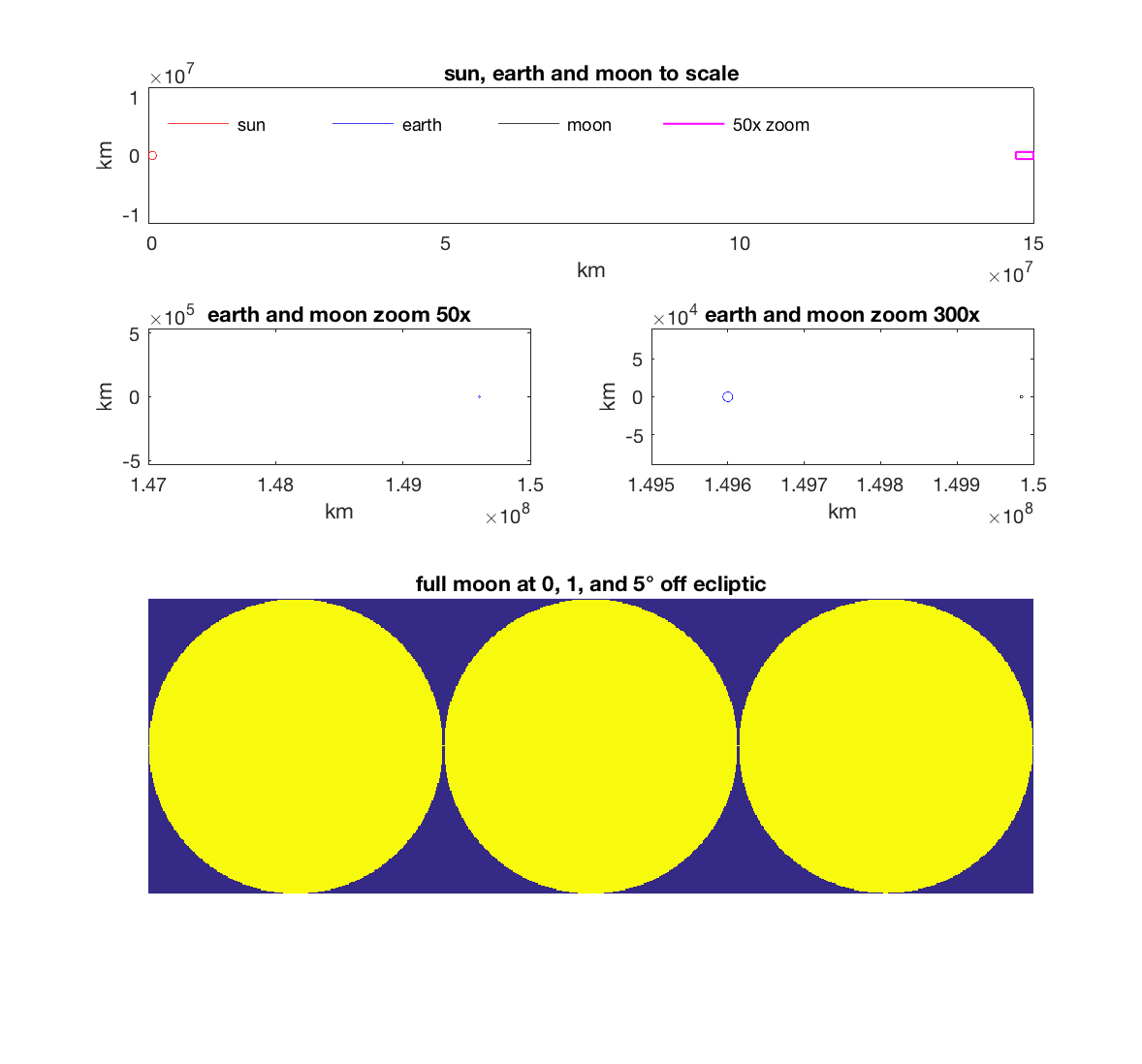 First row: Sun (red), Earth (blue) and Moon (black) to scale (axes - in km). You can see just how far away the sun is... and on this scale the Earth and Moon are essentially invisible (they are inside the "zoom box").

Now in order for the Moon to be in full sunlight, it needs to shift out of the direct line from the Sun to the Earth. The distance it has to shift to be in "full sunlight" is approximately the radius of the Earth plus the radius of the Moon: the actual shadow (umbra, where you get a total lunar eclipse) has a diameter of just 9000 km at the distance of the moon. This means that the Moon needs to be just 1.3° below the ecliptic to be out of the shadow (the ecliptic is the name of the plane containing the Sun and the Earth ... so called because when the Moon is on the ecliptic, you get an eclipse). The lunar orbit is in fact inclined by 5.145° relative to the ecliptic - so it spends most of its time away from the shadow of the earth. And that's why most of the time, we can see the full moon.

Bottom row: the difference between what a full moon looks like at 0°, 1°, and 5° "off perfect" illumination. As you can see, "full" looks pretty full for all of these - so a casual observation of the shape of the Moon along won't allow you to tell how far off the ecliptic it is. (The "flattening" is happening at the bottom of these plots - if you look closely, you can just see a few missing pixels on the right-most image).

And that is why you can see the full moon. And the earth is not flat.

You can find a nice animation (not to scale) on the earthsky.org site

To answer the question, your friend needs to understand that the sun is not a little thing on the other side of the globe. It is very large, and it only looks small because it is far away. Also the moon is not small and close. So the light of the sun can easily shine past the earth and onto the moon.

The other anwsers are also good, but you're not likely to change the flat-earther's mind, because it has more in common with a religion than a science. For example, it demands belief. For example, it has angels and devils. It takes a special skill to change people's religion (not a skill I admire). I've paid attention to it because in its present form it has a strong anti-semitic component. To see what I mean, here's an exposition. Look at "proofs" 197-199.

Flat-earth devotees have thought about these issues a lot longer and harder than most of us, so they have ready answers to objections. It takes a while to build up a store of debunkings of those answers. I won't try to list them all, but just do a little. Casual debunkings get shot down immediately.

According to the flat-earth model, the earth is a disk with the north pole at the center, and they think the Gleason map accurately represents the world. On this map, the lines of latitude form circles around the north pole, and they are the correct distance apart. The radius of the equator is about 6250 miles. There are tropics of Cancer and Capricorn, and Arctic and Antarctic circles. At the outer edge is what they call the "Ice Wall" that holds the oceans in.

They say the sun is luminous and it circles the north pole at a radius that depends on the season, cycling between the two tropics. The moon does something similar. There are numerous explanations of how this produces sunrise, sunset, and night, but you can see that they all start to fall apart even before you get to the southern hemisphere. For one example, sun's behavior on the equinox is problematic. For another, it's not clear how sextants or astrolabes could measure latitude. For another, it's not clear how sundials could work anywhere, especially in the southern hemisphere.

The long and short of this is: Be careful, it's quicksand. Discussions go in circles, laced with invective. The only reason I care is it has scary ramifications. I know that's outside the scope of this forum, but I don't think we can afford to ignore it.

The Earth's axis of rotation is tilted when compared to the plane of the moon's orbit. If you were in the low latitudes (near the equator), you'd expect the sun and moon to follow tracks that vary from north to south with the seasons (while much of the equatorial Earth has wet and dry seasons, at higher latitudes, Summer follows the sun), and in the southern hemisphere, you'd expect the sun and moon's tracks to the north.

The full moon is just when the moon is furthest from the sun, not when the three bodies are co-linear - we call that an eclipse because the shadow of one body (the Earth in the case of a full moon) crosses the other body. Note the roundness of the shadows...

You won't convince your friend by telling him the truth. Find out what he believes and why he believes it. Try to understand his point of view - I'd start with trying to understand why he thinks that the sun being to the south indicates that the Earth is flat - I'd ask for him to draw a picture to better explain. Think of your job as listening carefully and inquisitively and maybe, after you understand his beliefs and why he believes them, to tell him what you believe, and why. Facts rarely convince people (or they only convince the rare person) and often harden positions. Empathy, understanding and voicing your beliefs respectfully deepens their trust.

41
Why does the full Moon appear?

14
Mars just collided with Earth! A question of eccentricity
0
Movement of the Moon
2
Space station illuminated by the Earth
2
Actual Jupiter seen from the place, will it looks like on the pictures?
41
Why does the full Moon appear?
3
How big a coincidence is the Sun and Moon having almost equal apparent sizes?
1
Does the inner core of the Earth drop?