How does this cup-with-a-cylinder-inside puzzle work?

There is a desk-top puzzle making its way around my university, sold as "Newton's Gravity Defying Puzzle". It consists of a cup with a little cylinder that sits inside. Here are some pictures: 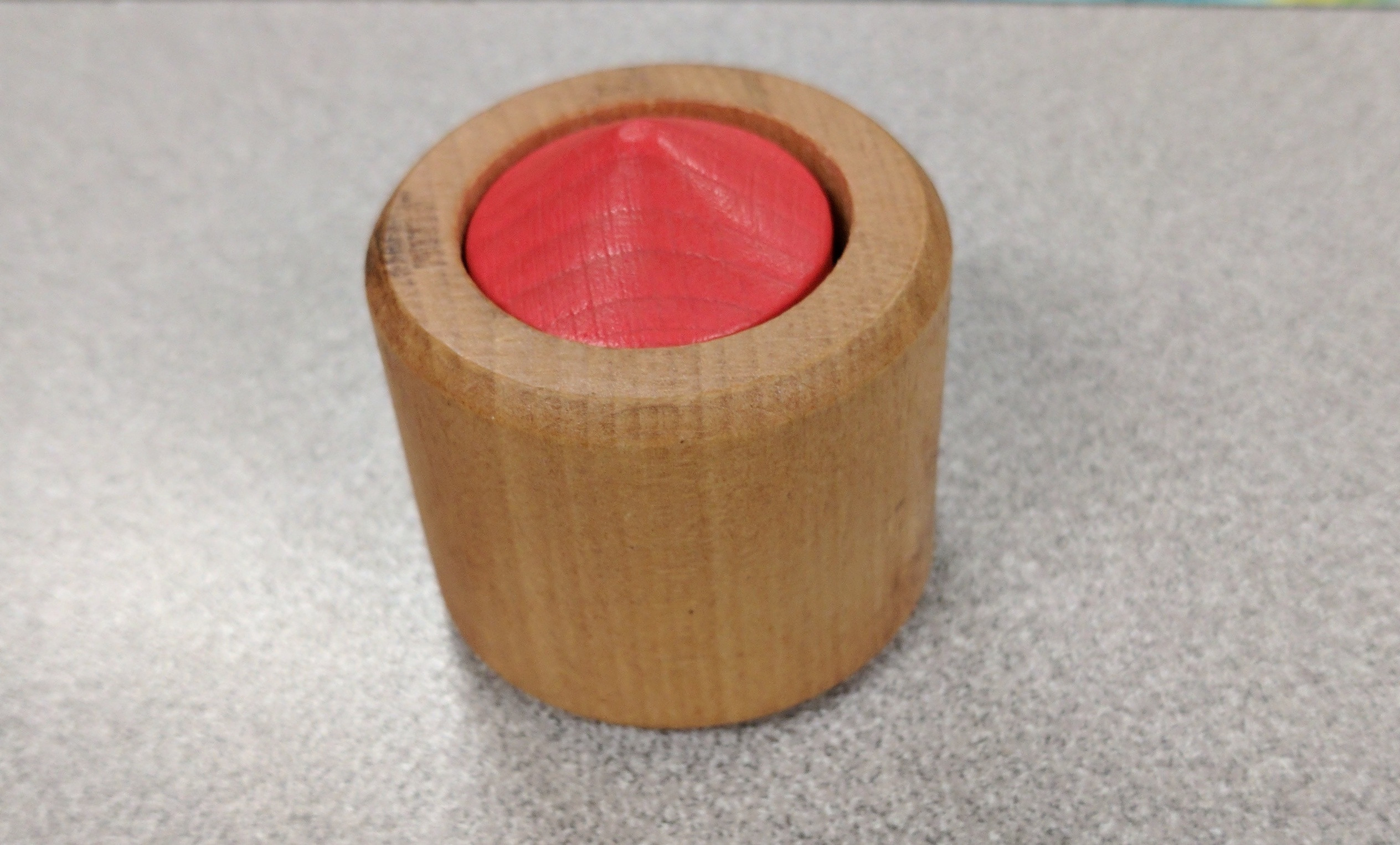 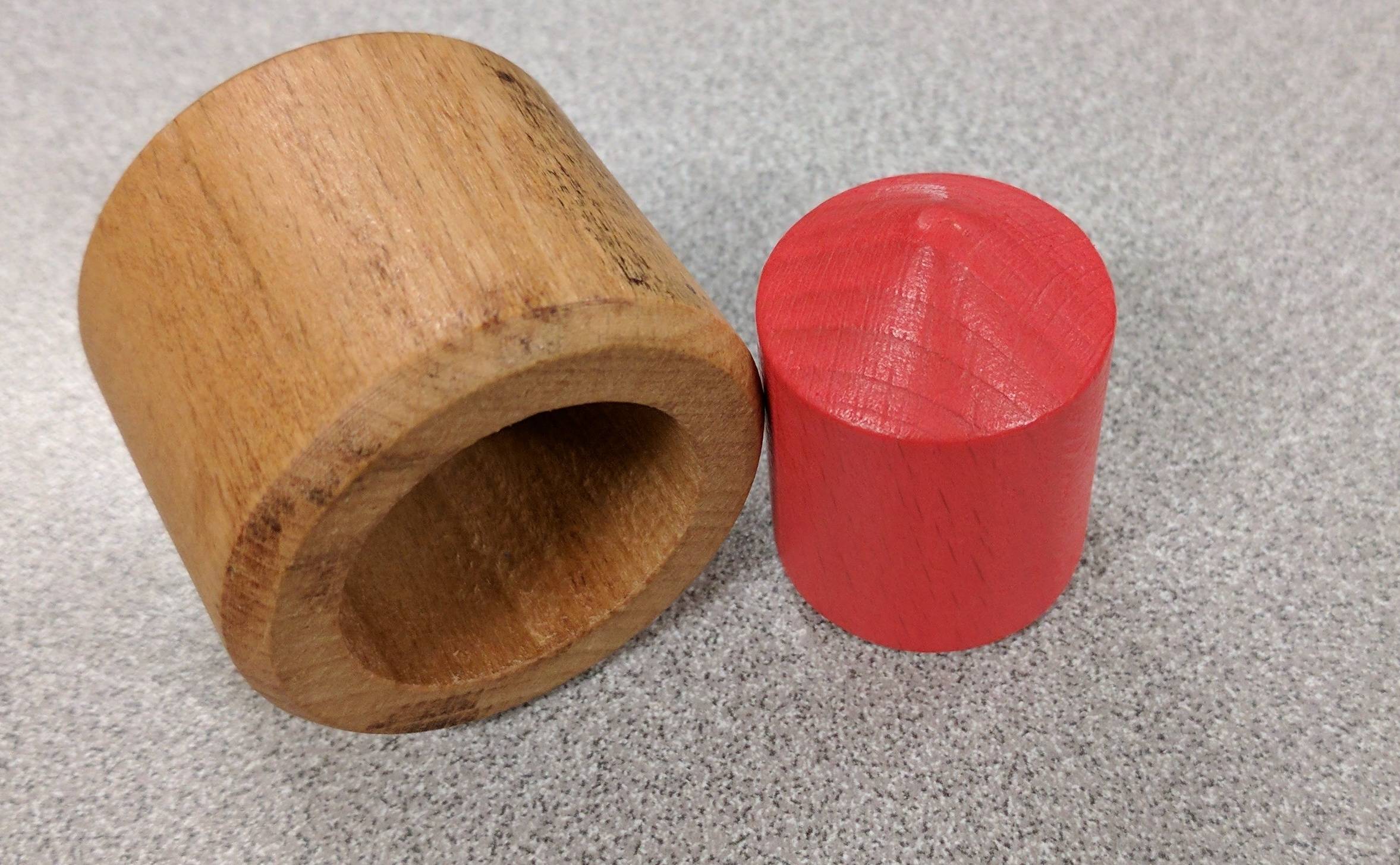 The goal is to remove the red cylinder without moving the base or using tools. Its solution is to blow air on the cylinder, causing it to jump out out of the cup.

The explanation I heard is that you're reducing the pressure above the cylinder, which causes it to rise upwards. However, I'm less and less satisfied by that vague description the more I think about it.

Is it the tiny amount of air surrounding the cylinder inside the cup which pushes it out? If this is true, how exactly does this happen? The air is around the edges of the cylinder, and I'm having trouble envisioning how it will apply an upwards force on the cylinder. I tried to fill the gap by wrapping paper around the cylinder to test this, but found it difficult to do so without introducing too much friction.

It's worth noting that blowing works both if you direct the air straight down at the face of the cup, and if you blow from the side, directly parallel to the face. It also works with the cylinder upside-down (pointy-face down).

Another possible explanation is that pressure isn't the main mechanism here, which I would find more perplexing: if that were the case, I would think that you could make this work in a vacuum by throwing marbles at the cylinder very hard, which my intuition finds hard to believe could work. However, if I'm wrong, how would this alternative mechanism work?

I love this question! It reminds me of the effect of a chimney, and of the tool sometimes used by artists, where you dip a hollow tube into some paint, and blow across the top of the tube. The paint rises up the tube and sprays from the upper end.

In the case of chimney and artist's tool, it is certainly a pressure difference that is the heart of the matter, and furthermore it is that the pressure is lower in the moving air at the top. In the case of the toy described in the question, some answers so far posted have doubted that this would be the explanation in this case. One, for example, suggests that blowing air would raise the pressure inside the vessel. I would like to suggest, merely on the basis of rough estimates, that it is a lowered pressure at the top, rather than an increased pressure at the bottom, that is the explanation.

Atmospheric pressure is 101 kPa. The pressure difference required to raise the wooden block is, I estimate, 200 Pa (I took radius = 1 cm, height = 3 cm, density = 650 kg/m^3). Using Bernoulli's equation, I get that the air speed required to get this pressure difference between moving air and stationary air is 18 m/s. That's fast but doable; I predict that the air has to be delivered as quite a sharp puff for a human.

Finally, is there any air at the bottom of the moving block, between the block and the vessel holding it? Well I predict that if you tried this with very smooth surfaces, e.g. polished glass or metal (with a hollow block so that the weight is the same) then it will not work. In other words, I suspect that there does need to be little gaps between the surfaces at the bottom, to let the air in. Small as those gaps might be in volume, the air in them produces plenty of force: it produces approximately 1 atmosphere of pressure, and thus a force of 32 newtons! (which is balanced by pressure from the outer end when the air is not moving).

"It also works with the cylinder upside-down (pointy-face down)."

If it works with the cylinder upside down then you need two different explanations why the pointy-face is important.

This youtube video is special -- they use a soda straw to blow the air, and they blow it straight down one side. It looks to me like it doesn't send much air across the pointy side at all.

Probably the pointy side doesn't matter.

I quick built a model using things I found lying around -- a couple of pill bottles with different diameters. I cut the larger bottle so the smaller one would fit in it. The smaller cylinder was now much longer than the larger one and had a large cap on the top. When I blew down one side, it reliably popped out. When I blew across, nothing happened.

When I concentrated my breath (using the barrel of a ball point pen since I didn't have any soda straws handy) I found that when I directed the air straight down into the tube, it pulled the inner cylinder directly into the airstream and nothing else happened. I think this would be the Bernoulli effect. The fast-moving air had less pressure than the air that moved slower coming back up the other side, so it had less pressure.

When I blew directly across the opening nothing happened.

When I blew diagonally down one side, the inner cylinder vibrated back and forth and rose. It also rotated. (It was a light plastic cylinder with little inertia.)

When I blew diagonally down at the center, not unbalanced to either side, the inner cylinder vibrated but did not rise at all. My guess is that when I blew straight down one side, it pulled the inner cylinder to it partly cutting off the air flow, and the air that got in the cracks on either side was enough to keep it pulled there. But when I blew toward the far side, it first pulled the cylinder and then lost enough force (because the air moving at the edges wasn't as much or as fast or as straight) that the cylinder rocked back and opened up more room. So it chattered back and forth. With the diagonal eccentric flow there are other effects.

I think something complicated is going on. It happens without the conical top, but the conical top might have some sort of effect. I didn't build one to find out whether it would make any difference.

Here's an idea (if it turns out to be worthless, I can delete my answer).

My guess is that it was designed with a cone on top to help guide air into the cup, and that it may also help to take advantage of pressure-related effects like Bernoulli's principle; however, I don't know enough about that aspect of the situation to start making conjectures. As for the explanation that you said you'd been given, that sounds similar to the faulty applications of Bernoulli's principle discussed in the Wikipedia article linked earlier in this paragraph.

I agree with the other answer that it seems as though this is a faulty application of Bernoulli's principle.

This feels a lot like the Bernoulli's principle used to explain how airfoils work; which is not accurate.

That said, it may work based on Bernoulli's principle.

If this is due to Bernoulli's Principle, it should work like this:

It has nothing to do with the sides of the container; besides them having enough clearance to avoid friction and allow new air in. Essentially, if you have air flowing over the top, it should cause a decrease in pressure at the top(according to Bernoulli's principle, which may not apply well to this compressible non-steady state flow in an unconfined space).

The bottom would be at atmospheric pressure, so there would be a pressure difference in the vertical direction.

I'm not sure how well it would handle the developing vacuum as the bottom raises though (due to expanding volume). Presumably the air rushing around the sides has low enough velocity by the time it reaches the bottom to still be higher pressure than the air on top.

There are reasonable answers here, but I would like to clarify just one aspect of the puzzle. So how do you get pressure from below the cylinder when you blow on it? @user122423 wrote: "The area where the cylinder meets the bottom of the cup certainly isn't airtight, so some air will be able to make its way between them" That may be so, but I have my doubts about it. I suspect the following happens: the flow is not axially symmetric, so at some point on the upper edge of the cylinder the pressure will be lower than at other points of the edge, but higher than at the bottom of the cup under this point (because there can be only little flow at the bottom). As a result, the cylinder gets tilted with respect to the vertical axis of the cup, air gets under the cylinder and pushes the cylinder up, as the pressure on the top is less because of the flow on the top. (see https://9gag.com/tv/p/awaYDx/newton-s-gravity-defying-puzzle , where they blow air at the periphery of the cylinder).

Not the answer you're looking for? Browse other questions tagged fluid-dynamics pressure flow bernoulli-equation lift or ask your own question.

3
How does the Dyson air multiplier fan create negative pressure?
4
How to deal with conflicting "no-slip" Navier-Stokes boundary value constraints?
16
Why does string not wick down?
10
How do simple bird waterers work?
4
How does a side branch intake resonator (Helmholtz?) work?
1
How does this spray gun work?
4
How does water fill an upside down cup?
0
How wings work in still air
6
Yet another airplane question