How area under Velocity-Time graph represents magnitude of displacement?

I understand that if the velocity is constant (acceleration=$0$) throughout the course of motion (where graph shows a rectangle) then it would simply be like playing with equation:

putting the value of velocity and time, then getting out the displacement.

Think about it like this
The velocity function is an infinite set of values(corresponding to time) that describe an infinite set of velocities(points). In this situation, that set of points is perfectly constant in its rate of change. An example range is [ 0, 1, 2, 3, 4 ]. Now, a single value that perfectly represents all of these values is an average since the rate of change is constant. This means that you can represent this set of values perfectly with an average, that average being ( 4 - 0 ) / 2. Now, with a single value that perfectly represents the entire range of values (the velocity function) you can calculate the area! Imaging that instead of a graph with increasing values, making a positively sloped line between time 0 and time x (time on the x axis), you represent the same value set with the constant single value average(2 in our example) and have a line with a slope of zero as your new value-representative function. Simply multiply the width of the rectangle(delta x) by the height of the rectangle (the average we calculated, 2) and you have your area. This is effectively the formula for the area of a triangle.

I gave this answer because I assume the question implies a limited or no experience with calculus and I see that all other answers are derived from concepts from calculus.

I suggest looking into the Fundamental Theorem of Calculus for a more intuitive understanding of this situation, or alternatively looking into Riemann rectangular summation which was probably described by someone on this question.

Well this is the point, you can't use (1) except if the interval is very small such that your "distance / time" will be a good approximation for your instantaneous velocity. So to get the total distance or displacement, (depending on how you define it, but let's assume that we're talking about distance), you need to find the distance travelled during the whole time, but the velocity you were going with was changing all the time, so instead, you divide the whole time into very small time intervals such that your velocity can be approximated to be constant on those intervals, and then use the value of the velocity $\frac{dx}{dt}$ at the beginning of each small interval and multiply by the value representing the time interval to get the distance, that is, integrate $\frac{dx}{dt}$ over time. But if you represent the velocity on the y-axis and the time on the x-axis, you'll find yourself, while summing up all the $\frac{dx}{dt} * \Delta t$, actually summing up areas of small rectanges whose heights are $\frac{dx}{dt}$ and whose widths are $\Delta x$. In other words, the whole "area under the graph" thing is just a consequence of your representation of velocity and time using rectangular coordinates.

Note that the above equations hold only for constant acceleration.

Therefore I would change your equations to

The key point here is exactly the idea of the constant speed (rectangle). 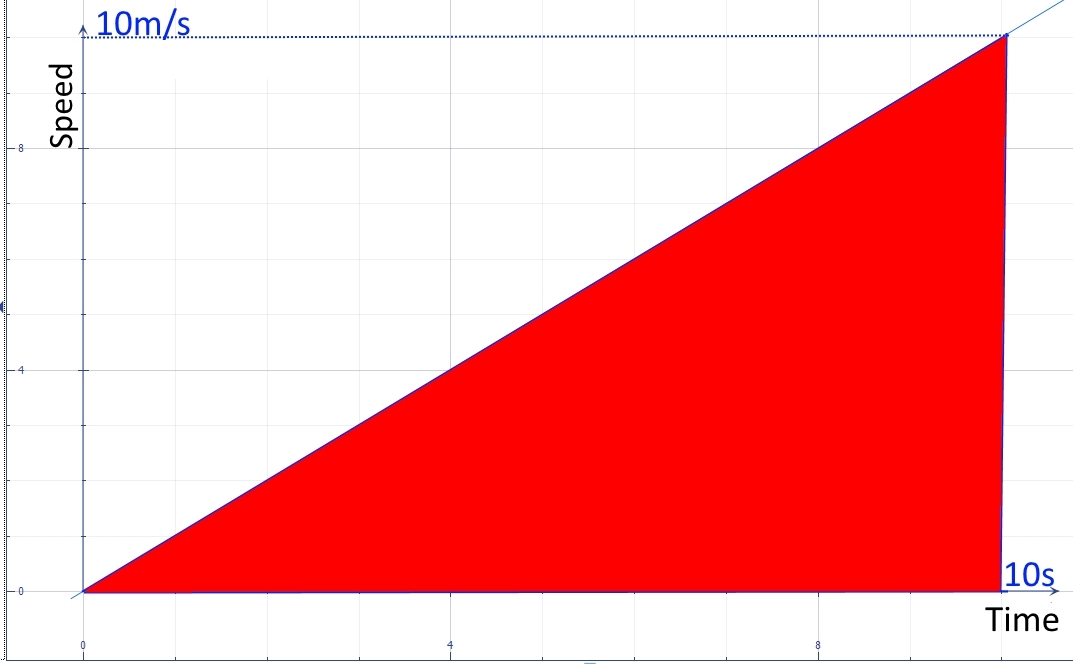 After Appling the 2 by 2 seconds sampling process you get the green triangles of the second figure. Has you can see, the total approximated displacement is an underestimation of the actual displacement, since for example, in $\rm t=3s$ you still consider that velocity equals $\rm 2m/s$ but in reality it is higher ($\rm 3m/s$). 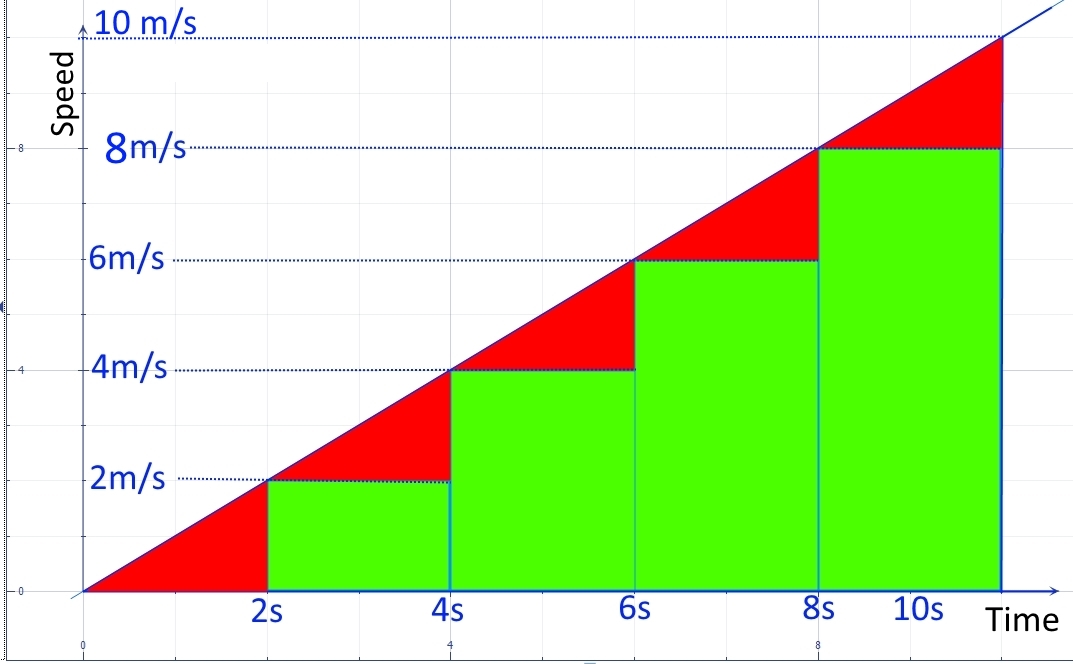 However, if you make thinner and thinner rectangles and then sum it up, your approximation will get closer and closer to the actual value. For example, if one uses a 1 second sampling, the error shown before for for $\rm t=3s$ will disappear, but not the error for $\rm t=2.5s$ or $\rm t=3.5s$. 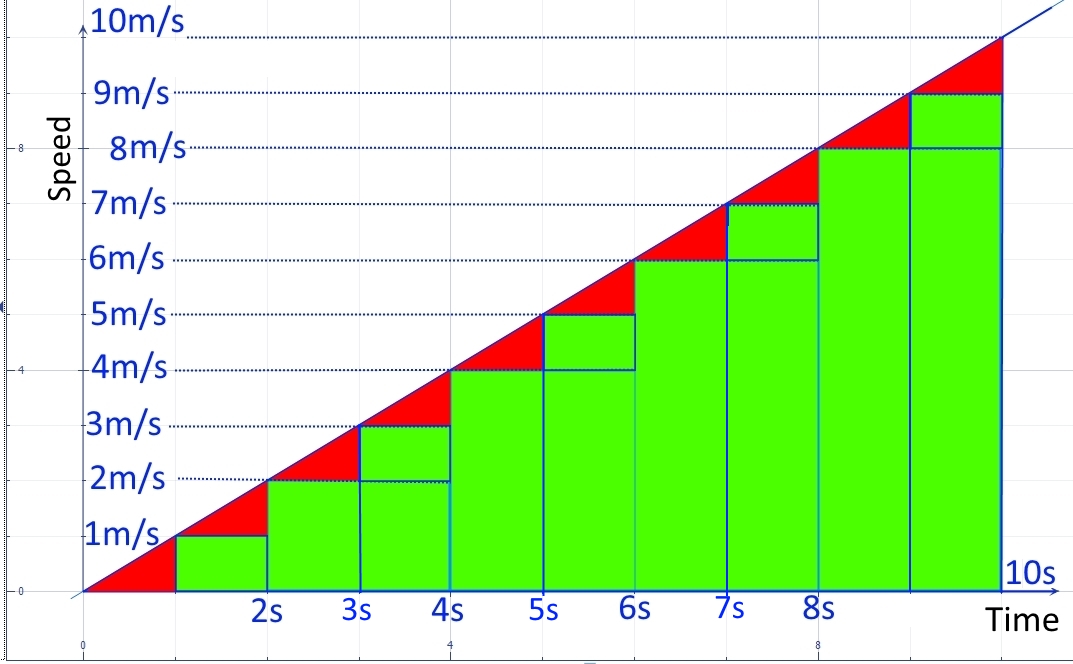 In the end, if you use instant sampling (infinitely thin rectangles) and then sum the resulting infinite number of rectangles your approximated value will match the actual value and the green area (which we shown to be equal to the approximated displacement) will become equal to the red area, i.e, the actual value for the displacement equals the area under the speed vs time curve.

For further reading search for the following keywords.

PS: This doesn’t mean displacement is a sort of “area”. It is just the result of representing graphs or plots of functions in a “piece of paper”. This means that when one represents any quantity as a graph the magnitude of such a quantity will be represented as a length, therefore, any quantity that results from the multiplication of the axes of such a graph will be represented as an area. For example, work will be equal to the area under the force vs displacement curve, and electric charge will be equal to the area under the current intensity vs time curve.

Not the answer you're looking for? Browse other questions tagged kinematics integration calculus or ask your own question.

1
Why is displacement equal to the area of velocity-time graph?