Is there really time reversibility in physics? [closed]

First, how i got to the question. I was randomly looking at this page: http://en.wikipedia.org/wiki/Langton%27s_ant

describing some sort of cellular automaton.

Here is the path of this automaton after more then 10000 steps: 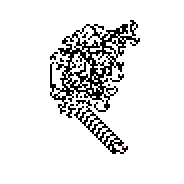 You can clearly see that after some time ant gets stuck in the loop (actually its a highway) and will be going on it forever.

Here comes the problem with many faces:

If we turn back time and start ant from one of the loop(highway) points we will never get to the original messy part, so obviously this computation is not time reversible since there is no way out of the loop! :) (But there should be ! :D)

Another thing is that information is also not time reversible - since if at some point in computation operation DELETE is used to erase all the previous data there is no way to get that data back.

Ok. So far so good. Lets take this question one step further. How is that so? They always told us laws of physics are time reversible and so on.

My intuitive answer is following. We can say that in the universe there are so called LAWS (physics and so on) and OPERATIONS. What is the difference?

LAWS do not change the objects on which they are operating and hence probably are time reversible.

OPERATIONS on the other hand can change objects, their number in the system and hence are not time reversible (if I delete some files there is no algorithm how to restore them again)

I understand its very close to the idea and interpretation of information.

So when they show us movie backwards and we think time got reversed its actually false! Yes you can reverse the motion of the people and objects, but you can not reverse speach for example since there is no logical connection between phrases being said. Here we can see how the content of the movie (life) is actually twofold - time revesible part (geometry in the poorest sense) and informational part (speech, computations and so on).

From all above it seems that the universe overall is NOT time reversible, and there is no way to go back in time! :) Or is there?

The microscopic laws of physics are reversible or, to say the least, CPT-symmetric (processes are invariant if they're run backwards in time, in mirror, and with antiparticles). The CPT symmetry follows from the Lorentz symmetry.

Langton's ant as well as pretty much any other Turing machine or cellular automaton fails to be microscopically reversible; that's just one reason among many reasons why Langton's ant (or any Turing machine or cellular automaton from the same class) can't be a valid law of physics. It's just a piece of recreational mathematics. Or a model in computer science, if you find recreational mathematics insulting; it's the same thing, anyway.

The physical principles such as microscopic reversibility or CPT-symmetry aren't curiosities or recipes to claim a "paradox" whenever a system of rules violates them. Instead, physical principles are meant to falsify and eliminate proposed rules that fail to satisfy them. So Langton's ant had to be immediately killed as a proposed piece of physics.

Incidentally, while the microscopic laws of physics have to respect the symmetry, emergent laws that deal with incomplete information or, equivalently, ensembles of microstates are irreversible, anyway. That's because the laws of mathematical logic are time-reversal-asymmetric. By definition, the future is a consequence of the past and implication $A\Rightarrow B$ isn't $A$-$B$-symmetric. This basic logical arrow of time is the primary asymmetry that implies all the thermodynamic and related arrows of time.

This is a really interesting question, but ultimately I think it stems from searching for too general/abstract a notion of what "time reversibility" really means.

Saying that physics is time reversible is, in many examples, equivalent to claiming that energy is conserved. The laws of physics work the same forwards and backwards. Or, in other words:

Any physical phenomenon could theoretically happen in reverse given the right set of circumstances, no matter how improbable those circumstances are.

I admit this is a bit confusing. Here's an example a professor gave to me that I found very helpful:

Suppose you drop a rock to the ground from a reasonable distance (let's say a meter). The rock doesn't bounce, it simply hits the ground and stops.

Person A sees a rock fall to the ground and stop. Person B sees a rock, initially sitting motionless on the ground, suddenly jump up a meter in the air. Person B rightfully concludes "this video must be playing in reverse."

This is where it is natural to say, "Clearly time reversibility is a silly idea. If we can easily tell that one video was playing in reverse, then the laws of physics must not be time reversible." But this depends on an elementary, incomplete notion of what we mean when we say "time-reversibility."

Here's the catch. There is nothing in the laws of physics that prevents the rock from acting in the way it does in the time-reversed video. When the rock hit the ground and stopped, all of its kinetic energy was transferred into heat, exciting the atoms in the rock, the ground, and the air around it. All of the energy still exists. It is theoretically possible, however unlikely, for all of those excited atoms to suddenly collide with the rock in such a way that they send it flying back up to its initial height.

This scenario is very, very, VERY improbable. It is not, however, physically impossible. It can happen, because the energy of the rock was conserved and can theoretically be given back to the rock.

Person B, in claiming that the video is time-reversed, is making a statistical, thermodynamic argument. They are not saying "it is impossible for a rock to suddenly jump up from the ground." They are saying "For a rock to jump up from the ground like that, we would require that all of the many atoms in the ground suddenly hit it in a very precise way. This is so unlikely, whereas a rock falling to the ground is a much simpler, more statistically probable process. Therefore, it is overwhelmingly likely that the video I am watching is reversed."

The measurement problem in QM. Making a measurement and getting a definite result is not time reversible.

Not the answer you're looking for? Browse other questions tagged time information time-reversal-symmetry arrow-of-time cellular-automaton or ask your own question.

1
What does it mean to reverse time?
35
Does the scientific community consider the Loschmidt paradox resolved? If so what is the resolution?
-1
By changing the direction of velocity of all particles does time reverse, as well as the development of the wavefunctions and the expansion of space?

32
In reverse time, do objects at rest fall upwards?
9
Physics without time
5
Is black hole formation reversible if physics law holds even in time reverse?
2
Is there really a direction of time?
2
What does it mean that the laws of physics are time reversible?
5
Time symmetry and general relativity
0
Reversibility of Physical Process : QM vs CM