Is there a limit to the intensity of the field strength of a permanent magnet?

Suppose I have a permanent magnet in the shape of a cylinder, with north and south at opposite ends of the cylinder.

If I created a neodymium magnet 100 times larger (1 meter radius, 1 meter thick), would it be 100 times stronger?

The sources of magnetic moments in materials can be represented by poles in analogy to electrostatics. Consider a bar magnet which has magnetic poles of equal magnitude but opposite polarity. Each pole is the source of magnetic force which weakens with distance. Since magnetic poles always come in pairs, their forces partially cancel each other because while one pole pulls, the other repels. This cancellation is greatest when the poles are close to each other i.e. when the bar magnet is short. The magnetic force produced by a bar magnet, at a given point in space, therefore depends on two factors: the strength $m$ of its poles (magnetic pole strength), and the length $l$ separating them. The magnetic moment is related to the fictitious poles as: $$M=m \times l$$

From the above discussion we can conclude that the magnetic pole strength of the larger magnet formed after joining the two smaller ones remains exactly same as the pole strengths of the smaller magnets. However, the magnetic moment doubles as $l$ doubles!

According to the magnetic Coulumb law the magnetic induction due to a magnetic pole of strength $m$ at a distance $R$ is: $$B=\frac{\mu_om}{4\pi R^2}$$ 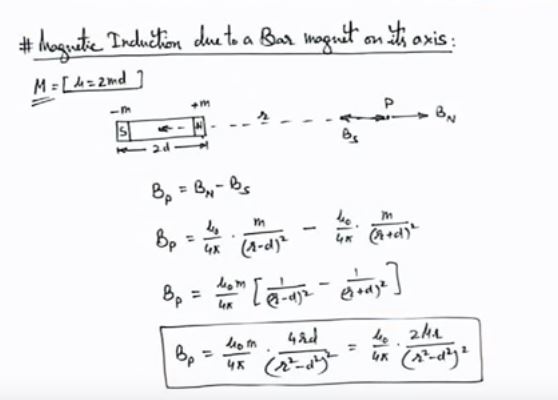 Now let us address your questions:

As far as I know there's nothing preventing the construction of arbitrarily large permanents except constraints resulting for space shortage and shortage of the magnetic material. However, very large permanent magnets are not used for industrial purposes as we can produce much stronger magnetic fields with the help of electromagnets of comparatively much smaller size.

Also, in general I don't see why a large permanent magnet would self destroy itself unless some external magnetic field is applied or it is demagnetized. Some common reasons for demagnetization of permanent magnets are listed here. But none of these will occur by itself.

1
Diagonal squeezing of an electron beam by a pair of bar magnets
2
Off-axis magnetic field strength for permanent magnet calculation/equation
0
How does the 'open circuit' flux density, the remanence, and the shape of a magnet relate to each other?
4
Are current loop and magnets 100% equivalent?