There seems to be something very strange about the relationship between quantum field theory and quantum mechanics. It is bothering me; perhaps somebody can help.

Even if this works out, it seems extremely strange for there to be a relative normalization between the one-particle states of field theory and the states of one-particle relativistic quantum mechanics. One ought to be able to redo the correspondence to make the normalization work out, but I don't see how. (Note that the normalizations can be easily made to agree in the non-relativistic limit $\omega \approx m$, but that's besides the point. Even if fully relativistic quantum mechanics is inconsistent [as some texts claim without reference], at the very least the perturbative corrections for $v \ll 1$ should be recoverable from field theory.)

[Edit: This seems to go beyond normalization. We can get a feel for what kind of state $\phi(\vec{x})|0\rangle$ is by computing its wavefunction as a function of $\vec{x}'$, $$ \langle \vec{x}' | \phi(\vec{x}) |0 \rangle = \int \frac{d^3 p}{(2\pi)^3} \frac{1}{\sqrt{2 \omega_{\vec{p}}}} e^{i\vec{p} \cdot (\vec{x}-\vec{x}')}. $$ This wavefunction is peaked (I think divergent) at $\vec{x}'=\vec{x}$, so in some sense the particle is centered at $\vec{x}$, but it seems to be quite a stretch to say that it is at $\vec{x}$ (as the books do). I would go so far as to say the claim is incorrect, since in quantum mechanics saying the particle is at particular position means the wave function is a delta-function there. I guess the same language is used in the Heisenberg picture, when two-point functions are called amplitudes for particles to propagate from one spacetime point to another. This similarly seems false by the conventional meaning of amplitude as the overlap between two localized states. Words of wisdom would be appreciated.]

Might as well collect my comments, most deleted, in this memo answer.

Essentially, QFT does not want you to go near position eigenstates of the style of QM. The eigenstate of the momentum operator, $|p\rangle$, is not the conventional QM one, nor does it have the same dimension. However, QFT distinctly does not encourage one to seek a fantastical position operator conjugate to the (P&S (2.33)) enumerating P operator it uses, and normalizes peculiarly. Angels should properly fear to tread there.

Schwartz unwisely labels this as $|x\rangle$, inviting one to confuse it with the standard QM state localized to x by a δ-function, which nobody uses, needs, or wants, on account of vexing paradoxes of the type you got. P&S wisely use the proportionality constant and leave things vague and evocative—but they failed to prevent your question! It is just the unique one-particle state centered at x, with this normalization property.

Despite the mild singularity at the origin, $K_1(x)\to 1/x$ as $x\to 0$, it cuts off rapidly for large argument x, $\sqrt{\pi/2x} ~e^{-x}$. So, the states $|\tilde{x~}\rangle$ are not as fully localized at x as a δ-function QM spoils one to expect, but they lose all support outside 1-2 Compton wavelengths of the particle in question and are as good as localized. In the Figure of this equal-time wavepacket autocorrelation function, r on the abscissa is in Compton wavelength units: 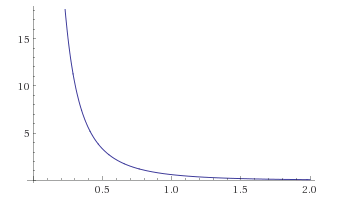 Recall that scattering experiments effectively live in momentum space, detecting momenta and energies of classical objects -- BB pellets at this level. (The spacial info in the detectors is just a classical geometric means of determining angles of momenta.) The QM interference has all been taken care of already by QFT and Wick's theorem, at this stage of asymptotic states’ detection.

The states $|p\rangle$ are virtually classical: they do not communicate/interfere with each other, living as they do in disjoint superselection sectors of the Fock space, fully decohered. So the wavepacket $|\tilde{x~}\rangle$ is virtually classical, and its quantum nature is only apparent when operated upon with more quantum fields. In scattering experiments, one never gets to probe this slight, sub-fermi-size, nonlocality; but, who knows, in earliest big-bang cosmology, one might well contemplate to.

These wavepackets are the true (one-particle) conjugates of the momentum eigenstates (check!), $\langle \tilde{x~}|p\rangle=e^{i{\mathbf x} \cdot {\mathbf p} }$. But note this is merely a projection of a single p component out of a classical wavepacket—mere classical Fourier analysis!

Not the answer you're looking for? Browse other questions tagged quantum-field-theory hilbert-space normalization or ask your own question.

2
Quantum Field Theory Interpretation of $\hat{\phi}|0\rangle$
58
What's the physical meaning of the statement that "photons don't have positions"?
34
What's the basic ontology of QFT?
19
Difference between field and wavefunction
14
Localized field quanta?
27
How does QFT predict the probability density to find a particle at x?
9
What exactly do we observe in particle accelerators that we have named "particles"?
10
Interpretation of $\phi(x)|0 \rangle$ in interacting theory
17
How does QFT account for localization (into a finite volume of space), in practice?
11
Bessel function representation of spacelike KG propagator
See more linked questions

6
What is the analogy of $|x\rangle$ in quantum field theory?
1
Renormalization and Particle Decay
2
The operation of scalar field $\phi (\vec x)$ on vacuum state
5
Calculation of Matrix Element in "Old-Fashioned Perturbation Theory"
1
Interpretation of the propagator
2
Infinite correlation functions in free field theory
3
Normalization of momentum eigenstates in QFT