I'm pretty much trying to figure out, whether an inclined orbital plane rotates with its parent or not.

The question assumes, that the moon is rotating around a planet, which in turn rotates around a star. By ecliptic plane I mean the plane given by the orbit of the planet around the star and by year I mean one sidereal period of the planet. There are no other celestial bodies involved.

I'm taking this picture as a reference for the orbital parameters: 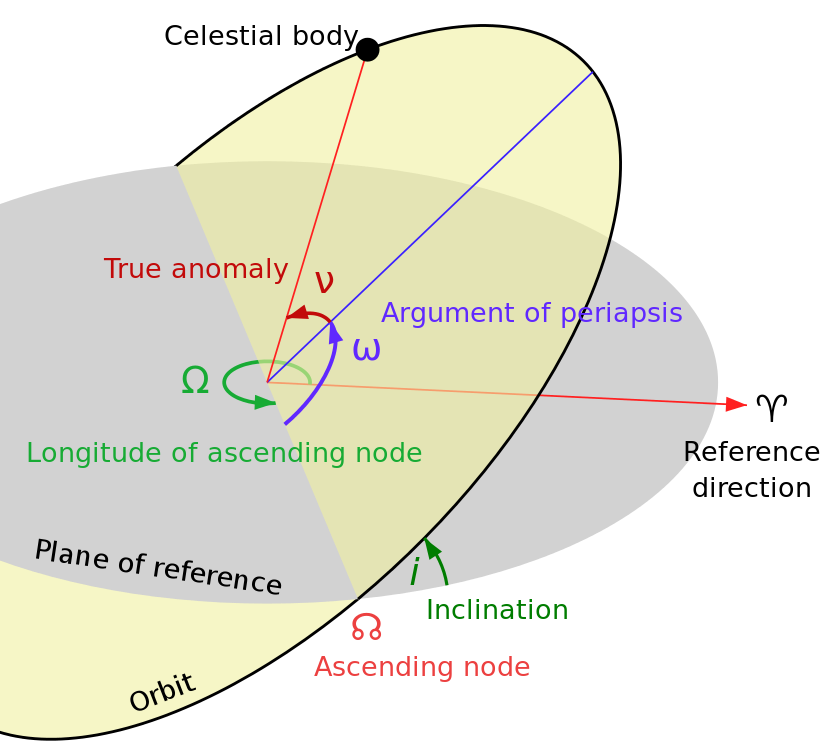 Taking from the Wikipedia article on Lunar nodes:

The plane of the lunar orbit precesses in space and hence the lunar nodes precess around the ecliptic, completing a revolution (called a draconic or nodal period) in 6798.3835 days or 18.612958 years.

So yes, the nodes rotate.

Not the answer you're looking for? Browse other questions tagged astronomy orbital-motion planets moon three-body-problem or ask your own question.

3
Does the length of the sidereal day vary systematically?
4
The validity of the Longitude of Perihelion
1
What is the correct Orientation of Earth's Rotational-axis w.r.t Ecliptic at Equinox?
1
Geocentric Ecliptic to Perifocal Coordinate Transformation
0
Position of a satellites satellite depending on orbital periods
2
Sidereal time calculation from orbital elements and mean anomaly
33
Is there a maximum distance from a planet that a moon can orbit?
0
How do I calculate evection and variation for the moon in my simple solar system model?
4
Drawing night sky of planets other than Earth (invariable plane ambiguity)