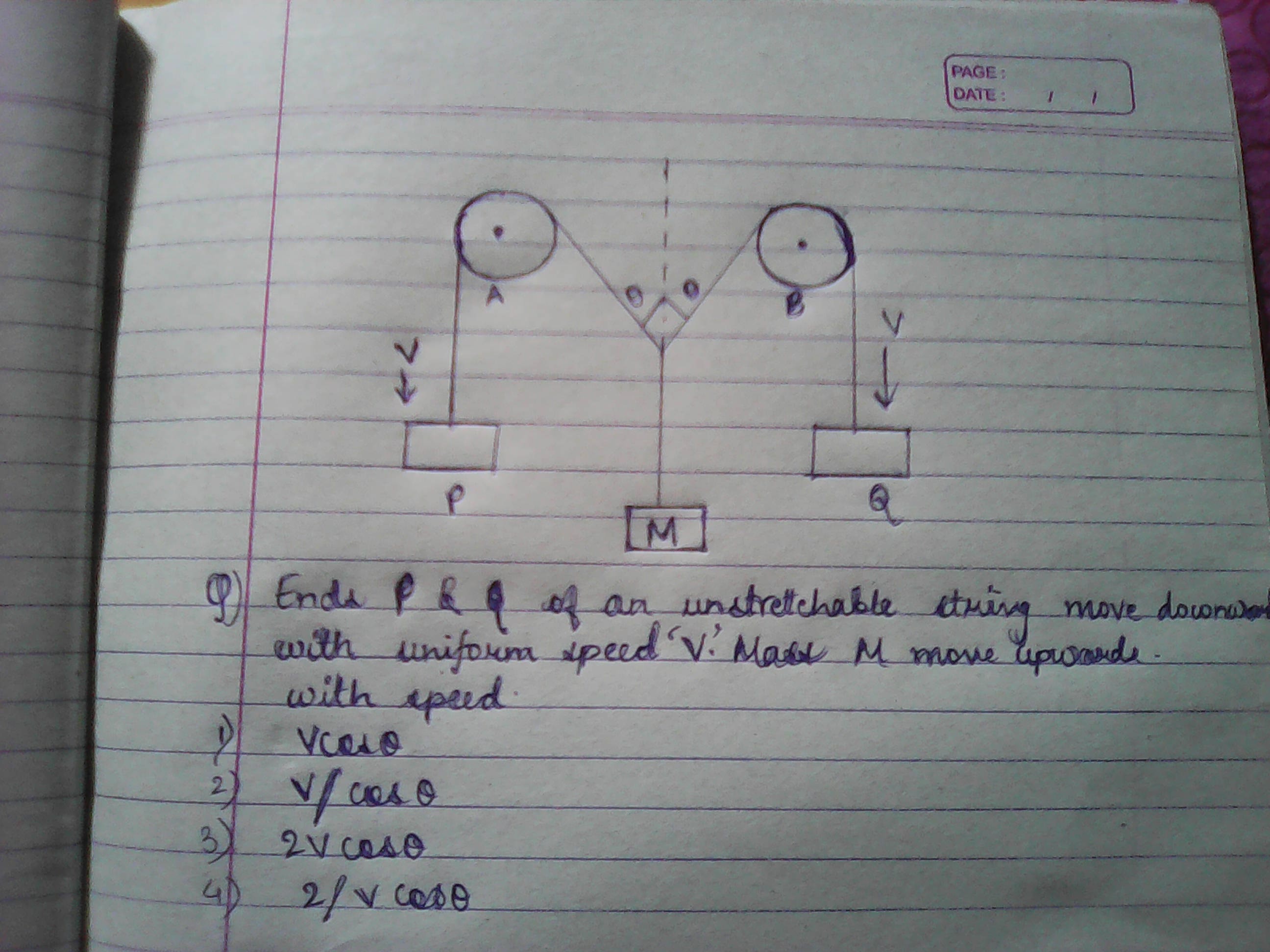 Please note that it is not a homework based question. I just want someone to solve the doubt arising in my mind.

In that case, the mass in the middle will rise with a speed very close to $v$ - and it rises at the same rate no matter how many of the other masses are present. Therefore, its speed can't possibly be $\frac{2v}{\cos\theta}$. It must be $\frac{v}{\cos\theta}$.

(a) $u \cos\theta = v$ is correct. The point of intersection of the 3 strings (which I shall call Y) is moving upwards with speed $u$. This point Y is at the end of the two strings attached to P and Q. Each string AY and BY is shortening at the speed $v$, so the component of velocity of Y along the direction of each string must be $v$. Therefore $v=u\cos\theta$ is correct.

(b) $u=v\cos\theta$ is not correct. The point at which the string is attached to pulley P (I shall call this point A) is moving with velocity $v$ at angle $\theta$ to the vertical. However, the motion of Y is not the same as the motion of A. As well as moving with speed $v$ in the direction AY, the string AY is also rotating about point A. The angle $\theta$ is changing. So the motion of Y (at the other end of the string AY) is the sum of the radial component along AY and a tangential component perpendicular to AY. Writing $u=v\cos\theta$ ignores this tangential motion of Y perpendicular to AY.

If the section of string AY did not rotate but kept a constant angle $\theta$ with the vertical, then the points A and Y would have the same velocity, in terms of direction as well as magnitude. In this case $u=v\cos\theta$ would be correct. However, Y would not be moving vertically in this case. It would be moving along AY. It cannot move along BY and AY at the same time, because then Y would have to split apart.

Note that if the masses P and Q do not move with the same speed $v$ (which could happen if they have different weights), or if the angles $\theta$ on each side of the vertical are different (which could happen if Y is not on the mid-line between A and B), then the velocity of Y will not be vertical. As a result, neither $v=u\cos\theta$ nor $u=v\cos\theta$ will be correct.

Not the answer you're looking for? Browse other questions tagged homework-and-exercises newtonian-mechanics vectors free-body-diagram string or ask your own question.

0
Finding speed of mass m attached with two inextensible strings
0
Resolving vectors along axes
0
What is physically changing from velocity or acceleration to force and their vector components?
0
Resolving Velocity Components in Constrained Motion

5
A More Intuitive Solution for the Kinematics of the Pulley-Rope System
2
Why is $R\cos{a} = mg$ in circular motion compared and not $R = mg\cos{a}$?
5
Find the speed of the block in this question
3
Difference between adding Force Vectors and adding Velocity Vectors
4
Problems regarding components of velocity
1
Does velocity add like vectors?
0
The component of velocity method for constraint motion