Time delay in a rotating frame

I would like to ask about two similar cases that I imagined, about the time and phase delay between rotating objects.

The examples are similar to the "Case 2" from a previous thread (How do different reference frames give different results (such as in Bell's Paradox)?).

Imagine two observers (people with telescopes maybe) in space that are standing thousands of kilometers apart and directly facing each other in free space.

At time t0 they are standing still (Fig1). At t1 they start rotating with let's say 360 degrees/second in the same directions (Fig2). And after a time delay, at t2 , the "news that the other observer had started rotating" arrives to each observer and they both stop accelerating (Fig3).

What would an observer see after t1 and t2 ?

My guess is that; during from t1 to t2, an observer would see him/herself rotating relative to the other one. In other words, s/he would see the other one starting to rotate in the opposite direction (Fig4).

But at t2, the other observer would seem to have stopped rotating relative this one. However, s/he would look standing tilted with an angle of maybe like 10-20 degrees (Fig5). 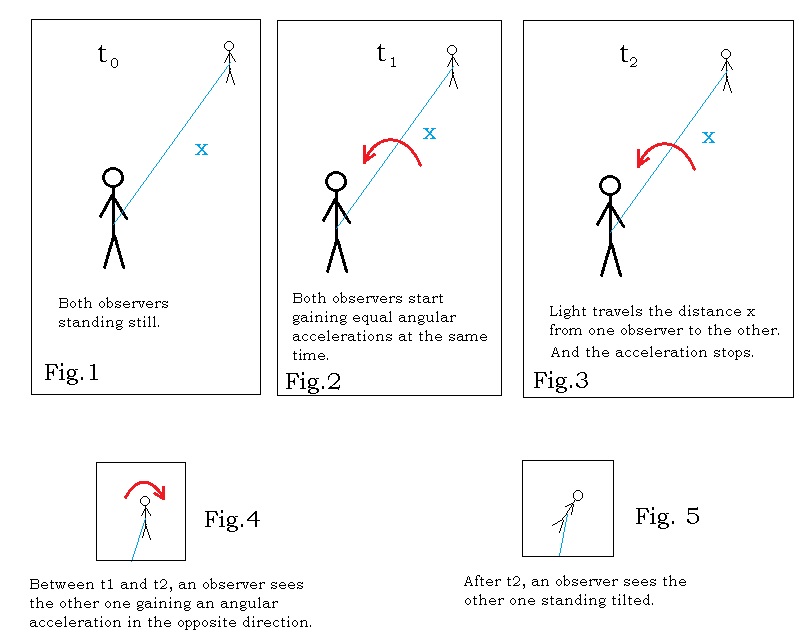 Same as in the Case 1 but let's replace the observers with huge horseshoe magnets, poles directly facing each other (Fig6). 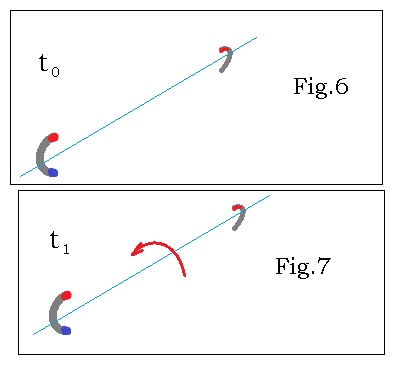 Let's say at t0, they were pushing each other with F0.

Between t1 and t2, would the force start decreasing?

After t2, would they reach a stable force F2 which is smaller than F0? (Due to them "seeing" each other tilted with an angle)

I know the examples here are too extreme to be realistic but in order to render any other factors uneffective, I needed to exaggerate.

Thank you for your time.

Browse other questions tagged electromagnetism general-relativity reference-frames or ask your own question.

4
Twin paradox - observers counter orbiting Earth
1
Would Special Relativity Predict Time Dilation of a Geostationary Satellite Compared to an Observer on Earth?
6
Rotational relativity? Is there an universal frame of reference for rotation?
0
Co-rotating body frame
0
Could gravity around rotating bodies make them pull apart rather than attract? Due to the gravitational field analogous to the magnetic field