In a metal, one or multiple bands can cross the Fermi level. Above Fermi level, the occupation is zero. How would that affect the derivation?

Is it the sum of Berry curvature of all the bands below Fermi level? Since the main calculation is done for bulk (3D), how the 3rd momentum component is fixed? 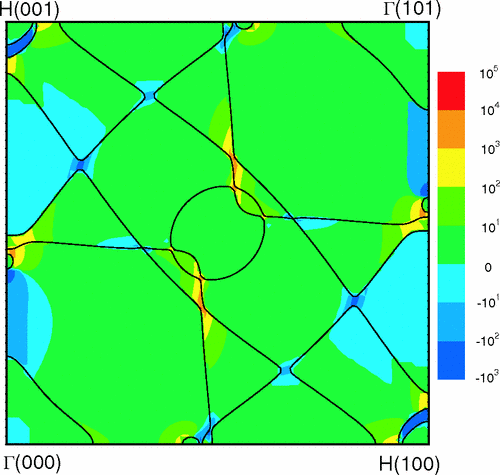 2.What data is shown in this figure [Fig.4 of the above paper]?

Taking advantages of lattice symmetries, we can reduce the amount of calculation inside the first Brillouin zone to only calculations along the high-symmetry points of the lattice, in this system consisting of $\{\Gamma, H, P, N \}$. An intuitive 3D plot can be found in this link.

In Fig. 4, authors focused on a particular cross-section of the system along the (010)-plane, determined the associated Berry curvature and plotted that in the momentum space along $\Gamma -H$ points of the lattice. As you may also be noticed from the caption, the black solid lines are the Fermi surface of the system. Some 3D plots of the fermi-surfaces can be found here.

In a metal, one or multiple bands can cross the Fermi level. Above Fermi level, the occupation is zero. How would that affect the derivation?Is it the sum of Berry curvature of all the bands below Fermi level? Since the main calculation is done for bulk (3D), how the 3rd momentum component is fixed?

It has been statedd in the paper, Eq. (5), $$\Omega(\mathbf{k})=\sum\limits_{n} f_{n} \Omega_{n}(\mathbf{k}),$$ where $f_{n}$ is the Fermi-Dirac distribution. Thereby, only occupied states have a contribution in determining the Berry curvature of the system. Subsequently, the conductance of the system is obtained from the Berry curvature which has been summed over the occupied states.

Regarding the third component of momentum, please recall that the presented calculations in Fig. (4) are performed on a particular plane of the system, namely (010), imposing that due to the plane equation (F(k_{x}, k_{y}, k_{z})=0) only two of the components are free and the third component can be expressed as a function the others.

Not the answer you're looking for? Browse other questions tagged quantum-hall-effect berry-pancharatnam-phase or ask your own question.

8
Physical Interpretation of Relationship Between Hall Conductivity and Berry Curvature?
0
Problem with quantum Hall effect and Berry curvature
3
Relation between Berry phase and degeneracies, the example of Hall effect in graphene
0
Source Berry Curvature Chern Insulator
1
I am trying to integrate the Berry curvature of Dirac Semimetal to obtain anomalous hall conductivity