I'm new to physics and I was wondering if time loops (like those seen in the movies Groundhog Day or Edge of Tomorrow) possible?

The closest thing in mainstream theoretical physics is "closed timelike curves", paths along which you can travel and thereby return to the same place and time as you started, provided your velocity varies as the path requires. (Shortcuts through spacetime called Einstein-Rosen bridges or "wormholes" can be a part of the setup.) Whether such paths exist without requiring faster-than-light travel depends on the topology of spacetime. It's easy enough to write down geometries containing CTCs, but the hard part is how such circumstances could arise, and proposals typically require conditions that aren't known to ever occur, such as matter with negative density.

Time loops are a part of spacetime physics. They are though probably not causally connected to our observable world n a direct way. Probably the best example is the anti-de Sitter spacetime. The anti-de Sitter spacetime in $n$ dimensions is topologically $\mathbb R^{n-1}\times\mathbb S^1$, where the one sphere or circle is the time direction. This is by way of contrast to the de Sitter spacetime $dS_n$ that for closed spatial surface has topology $\mathbb S^{n-1}\times\mathbb R^1$. The closed timelike curve of $AdS_n$ means it is impossible to specify Cauchy data on a spatial surface that is complete. It is often that $AdS_n$ is treated in conformal coordinates so the infinite regions the spatial surface are mapped to the boundary of a disk. The conformal infinity of $AdS$ is timelike, which means there does not exist a spatial surface that can contain all the data specifying the evolution of the surface throughout the spacetime. We may however specify such data on a patch or region that is causally complete. I illustrate this with the $5$-fold tessleation of $AdS_2$. The blue region is one region where a field can be defined in this causal set. It would not though be defined in a similar set centered around C and D. 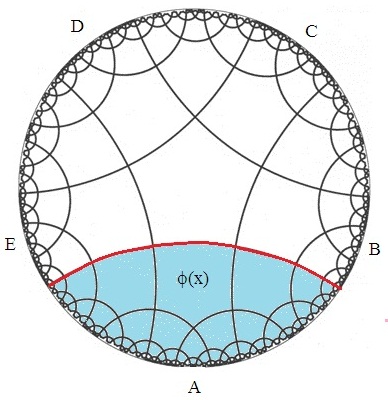 The $AdS$ appears in a number of strange places. It occurs with black holes. A simple example is with the Scwarzschild metric $$ ds^2~=~\left(1~-~\frac{2m}{r}\right)dt^2~-~\left(1~-~\frac{2m}{r}\right)^{-1}dr^2~-~r^2d\Omega^2, $$ $m~=~GM/c^2$. We now consider the case of an observer close to the horizon $r~=~2m~+~\rho$, for $\rho~<<~2m$. This observer is on a highly accelerated reference frame. We then have that $$ \left(1~-~\frac{2m}{r}\right)~=~\frac{\rho}{2m~+~\rho}~\simeq~\frac{\rho}{2m}, $$ which means the metric is approximately $$ ds^2~=~\left(\frac{\rho}{2m}\right)dt^2~-~\left(\frac{2m}{\rho}\right)^{-1}dr^2~-~r^2d\Omega^2. $$ This is an $AdS_2$ tensored with a $\mathbb S^2$. What is happening is that the apparent curvature of spacetime to the accelerated observer is becoming negative. The quantum fluctuations of particles appear to leave the past horizon, arc outwards and the return to the future horizon. This is similar to the arcs seen in the diagram above. The apparent curvature of spacetime to this observer is negative in this Rindler wedge, which also means the energy associated with this curvature is also negative. This seen with the cosmological constant for the $AdS_n$ which is $\Lambda~<~0$. This has some odd consequences we will return to shortly. I wrote a more extensive post on this here at stackexchange. For the accelerated observer, they can only access information in a conformal patch associated with the $AdS_2$ as such this means this observer is not able to use this effect as a way of travelling back in time.

There are some other real systems where closed timelike curves may exist. One is in the interior region of a Kerr-Newman black hole. The event horizon splits into the outer and inner horizon, where the inner horizon $R_i$ connects to a region with the singularity. There is though a problem in that it is continuous with the ${\cal I}^+$ or $r~=~\infty$ in the timelike region I. This means a huge amount of radiation piles up near $r_-$ and this constitutes a mass-inflation singularity. More than likely you can't make it into the region III with the singularity. 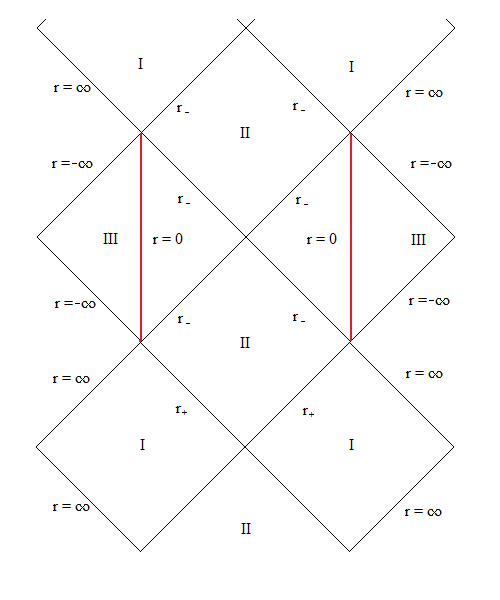 Closed timelike curves and spacetimes that permit them have negative energy as their source. This is a violation of the Hawking-Penrose averaged weak energy condition $T^{00}~\le~0$. The problem on encounters with this is there is no minimal energy level to quantum systems or quantum field theory. This is then a bit of a problem, for such spacetimes end up being a huge source of radiation, in fact an infinite source. In the case of $AdS_n$ this does have some interesting consequences. For the accelerated observer near a black hole this means that since the accelerated observer's clock is running so slow compared to the observer “at infinity,” that Hawking radiation from the black hole comes out in a huge explosive gush. This is similar to what we expect for negative energy, but since this is a local negative curvature it is not “future complete.” The black hole eventually quantum decays so the explosive gush of radiation has finite duration to the accelerated observer.

For an anti-de Sitter spacetime $AdS_4$ things are very interesting. The infinite gushing out of radiation may really in fact be a gushing out of cosmologies. This is a decent model for an inflationary spacetime that spins out $dS_4$ spacetimes. The quantum field theory with string or Planck energy steps will then drop the $AdS_4$ energy density by $\Delta\rho~\sim~-1/L_p^4$ which then by energy conservation (tricky here as energy conservation is touchy with general relativity) spits out a $dS_4$ with $\Delta\rho~\sim~1/L_p^4$. This inflationary cosmology $dS_4$ then exhibits its vacuum transition to a false vacuum and there is the heating or reheating period where radiation and particles are produced in the nascent cosmology.

It does have to be finally reported that it is extremely unlikely that closed timelike curves can occur on a classical level. For one thing if you were to transport a quantum state on a closed timelike curve you would have a point in spacetime where the state is duplicated. This violates the no-cloning rule of quantum mechanics. It could though be that a quantum path integral might have some “nearly closed” path. However, it does seem unlikely that we will ever have time machines or faster than light travel.

Not the answer you're looking for? Browse other questions tagged general-relativity time-travel wormholes closed-timelike-curve or ask your own question.

0
Is a time loop possible?
7
What happen if Hawking radiation is not found?