In the context of AdS/CFT an image like the following (coming from this article by David Mateos) is often shown: 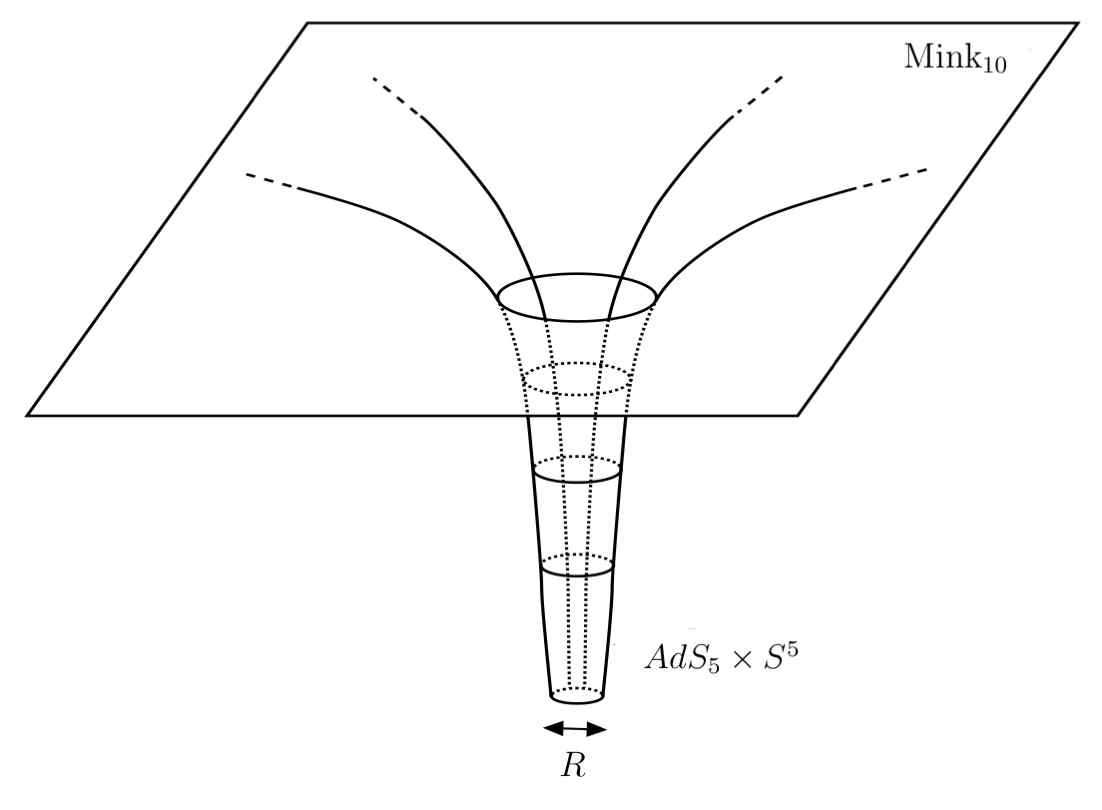 but I'm not really sure if I interpret it correctly.

As the article says, we have a static spacelike stack of $N_c$ infinite 3-D branes (assumed to be at zero separation), whose energy density deforms the metric of Minkowski $9 + 1$-space to one that would obviously have to be constant on submanifolds that are the product of a 5-sphere transversal to the branes and $\Bbb R^3$, parallel.

Since the branes concentrate their energy in a lower-dimensional subspace, we get a horizon, which must also have the shape $S^5\times\Bbb R^3$. $R$ denotes the $S^5$ radius of the horizon.

As a Lorentzian manifold the resulting space is not equal to $AdS_5\times S^5$, but close to the branes the metric takes the form

The last term is the standard metric on a Euclidean sphere of radius $R$, while the first two terms are the anti-de Sitter metric on a (locally) perpendicular factor.

Far from the branes the metric tends to the Minkowski metric.

Now for the image. Why is it drawn like this and why is it called a "throat geometry"? Is it just to say that the closer you get to the horizon, the larger distances become w.r.t. the coordinate distance, and an additional dimension is used so that Euclidian distance in this 11-dimensional space restricted to our 10-dimensional space (and depicted like a 2D surface in 3D) corresponds with the intrinsic distances in the actual space? If so, I guess the Schwarzschild solution also exhibits a "throat geometry".

I guess that the circles are just concentric $S^5$'s for different $r$, so we see the $S^5$ and from $AdS_5$ we only see the $r$-coordinate. If that is correct, we don't see any timelike directions, which is OK I guess since we are in a static situation, unless we'd like to see light-cones.

Can the $3 + 1$-dimensional Minkowski space on which the supersymmetric Yang-Mills theory dual to the string theory in $AdS_5\times S^5$ should live, and which is the boundary of our $AdS_5$ be appreciated? From what I understand, it is not there in the image at all (or just as a point).

Wouldn't it be more interesting to show some dimension parallel to the branes instead of one of $S^5$? Or would we be missing something then? What I have in mind is something like this: 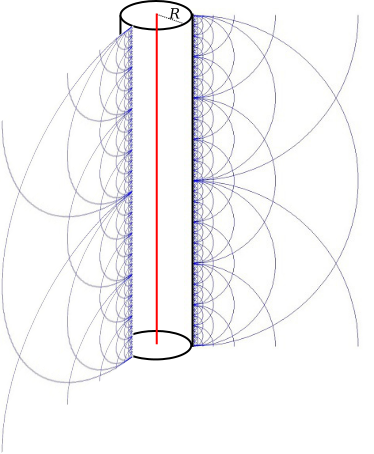 In this image we see a cylinder, which is the horizon $S^5_R\times\Bbb R^3$, the stack of branes in red, and the same perpendicular coordinate $r$, now showing two dimensions of the $AdS$-factor. The Minkowski boundary would be any vertical line on the surface of the cylinder.

Is this indeed what it is? Or am I misunderstanding something?

This image from the paper by David Mateos schematically representing an embedding diagram for two-dimensional $(r,\phi)$ sector of the full 10 dimensional supergravity solution.

This is a visual aid to understand geometry of spatial part of the metric and is also often used to illustrate geometry of two dimensional spatial sections solutions of general relativity, see e.g. §23.8 of Misner, Thorne & Wheeler or section 7.13 of A. Hamilton GR textbook (free 1108pp. pdf). For example, here is an embedding diagram of equatorial slice of Schwarzschild solution for constant Schwarzschild time, from A. Hamilton's textbook: 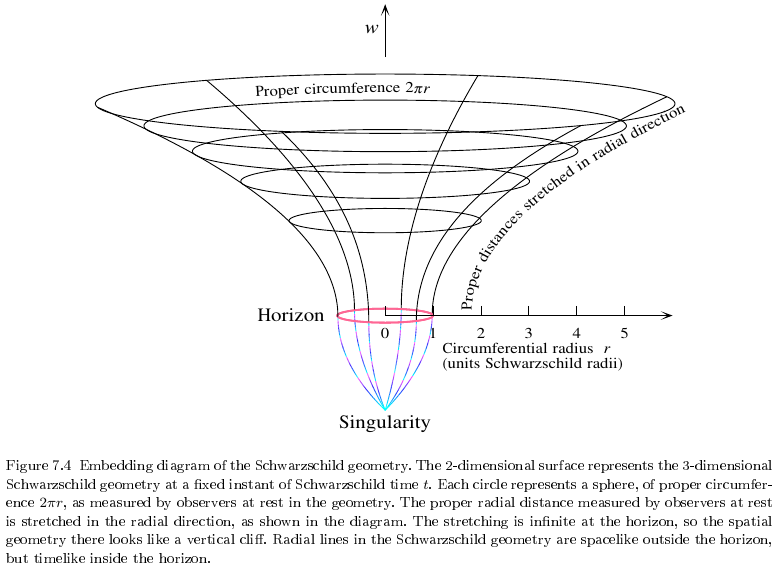 Next we choose a point in the brane worldvolume by keeping all of the $x_{||}$ coordinates fixed (which is a higher dimensional equivalent of choosing $t=\mathrm{const}$ in 4D GR illustrations) and select the equatorial circle in a 5-sphere, parametrized by the angular coordinate $\phi$. The resulting two dimensional submanifold with coordinates $(r,\phi)$ has the metric: $$ ds^2=f^{1/2}\,(dr^2+r^2d\phi^2), $$ which we can isometrically embed into three-dimensional euclidean space. In cylindrical coordinates $(\rho,\phi, z)$, since the metric is independent of $ϕ$, this embedding would be a surface of revolution around the $z$-axis of a curve $\{\rho(r),z(r)\}$. For $r\to0$ the curve has the asymptotics $z\to -\infty$, $ρ\to R_h=({\alpha^{′}}^2 4\pi gN)^{1/4}$ so that the embedding surface in this limit is basically a tube (this is the representation of a “throat”) stretching down to infinity with the horizon being infinitely far below. As $r\to \infty$ we have asymptotically flat behavior $z\to \mathrm{const}$. This is the surface that David Mateos's paper reproduces.

Wouldn't it be more interesting to show some dimension parallel to the branes instead of one of S5? Or would we be missing something then?

The point of Mateos's image is the illustration of the near-horizon limit: deep into the “throat” the surface is a tube, which is a direct product $\text{line}\times\text{circle}$ corresponding to $\text{AdS}_5 \times S^5$ of the full ten-dimensional solution, while away from the throat the surface is approximately flat.

Of course, if the purpose is to highlight the relationship between the AdS space and its boundary, other visual representations may be needed, so OP's attempt may also be useful.

10
Matrix geometry for F-strings
5
Supergroup action on $AdS_5\times S^5$
4
AdS/CFT in global coordinates (as opposed to Poincare coordinates)
7
Wilson Loop in AdS/CFT
4
Very basic question on AdS/CFT
3
Why do we not try to describe $4$d quantum gravity with a $3$d CFT?