How does Huygens' principle deny the possibility of diffraction?

In The Fundamental of Optics 4th edition by F Jenkins,H white there is a paragraph -"Huygens' supposed the secondary waves to be effective only at the point of tangency to their common envelope ,thus denying the possibility of diffraction.The correct application of the principle was first made by Fresnel."

I can not understand why huygens' principle did not explain diffraction. 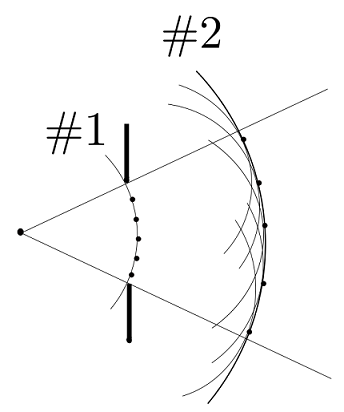 Fresnel expanded this principle by adding a couple of multiplicative factors to the secondary spherical waves, and removing the restriction above. As stated in this answer, the observed field at a secondary wavefront is a sum of diverging spherical waves in the form of $\dfrac{\exp{(jkr})}{r}$ located at each and every point in the aperture (as stated in the original Huygens principle), multiplied by a factor of $\dfrac{1}{j\lambda}\,U_I(x',y') \cos \theta$. This modification makes the principle fully consistent with the Rayleigh-Sommerfeld formula for scalar diffraction, obtained from the Maxwell's equations.

Not the answer you're looking for? Browse other questions tagged optics huygens-principle or ask your own question.