To what extent has the canonical ensemble model in statistical physics been “directly” tested in the laboratory?

The following statement, and similar extensions of it to various other statistical ensembles, forms a basis for many computations in statistical physics:

If we construct a large number of identical copies of a system, and if the state of each system is prepared by bringing it into thermal contact with a heat bath having temperature $T$ and waiting for sufficiently long (meta comment: for "thermalization), then measurement of the energy of each system will yield a distribution of energies that is Boltzmann.

Applying this statement to microscopic models of systems can be used to correctly predict well-known empirical, thermodynamic facts such as equations of state. In addition, the apparent general theoretical and empirical success of the predictions the statistical mechanical apparatus based on the statement above is pretty convincing evidence in its favor. However, I would personally find a more "elementary, direct" test most convincing.

Question. Has an experiment of the following structure or something morally equivalent ever been performed in the laboratory?

It might not quite fit the bill, but a recent experiment in ultracold gases out of the Greiner group does something like this. I think I already wrote about this paper for some other similar question, but I can't find it.

To summarize: the authors take an isolated quantum "many-body" system of six particles, initialize it in some definite non-equilibrium state, then allow it to thermalize with each individual particle seeing the other five particles as a bath. Looking at the occupation statistics at each site, they see this evolve from the initial condition of one particle per site to the canonical ensemble distribution on each site, with a temperature determined by the initial energy density. Here's the relevant plot: 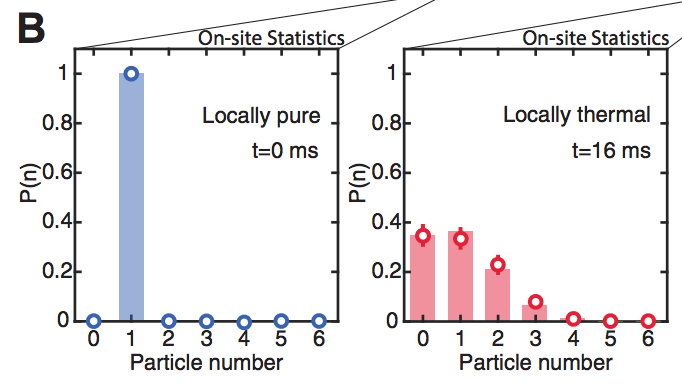 where the red points are the canonical ensemble prediction.

As is evident, despite the small system size it does thermalize to a good approximation, at least when looking at single sites. They repeat this many times, with a new copy of this system each time, to get statistics.

Although not directly relevant to your question, the authors are additionally able to directly verify that the many-body quantum state remains pure while the subsystems become thermal mixed states, so they also test the picture of quantum thermalization as being due to development of entanglement.

So the differences between this and your desired experiment are that it uses rather small systems, there is no heat bath held at a fixed temperature, and they cannot measure the energy distribution directly. However, it does show the evolution of an observable towards a canonical ensemble distribution, and as a bonus shows that this happens everywhere in the system even though it is isolated.

Not the answer you're looking for? Browse other questions tagged thermodynamics statistical-mechanics experimental-physics or ask your own question.

10
Why is the canonical ($NVT$) ensemble often used for (classical) molecular dynamics (MD) simulations?
17
Why is (von Neumann) entropy maximized for an ensemble in thermal equilibrium?
0
Temperature from the Gibbs entropy
0
Entropy as a function of internal energy in an arbitrary ensemble
6
Why does energy exchange mechanism appear to affect energy distribution in a gas?
1
Microcanonical ensemble question
0
Derivation of temperature with presumption of microcanonical ensemble?