It would seem to me that caesium-134 would have a longer half-life given that it only contains one more neutron than stable caesium.

So, let's take a tour of the isotopes, relying mainly on data from nuclear datasheets. Start with Cs-134 (you probably did not know there was a journal called Nuclear Data Sheets). Going down to page 69, one finds that the Cs-134 nucleus has a spin of 4. It can decay to any one of 6 possible Ba-134 nuclear energy levels (the ground state and 5 excited states). The majority of the decays go through an excited state, which also has a nuclear spin of 4. The half-life is 2 years.

Cs-135 is listed with a nuclear spin of 7/2. There is only one available Ba-135 level to decay to, and it has a nuclear spin of 3/2. The half-life of this decay is 2.3 million years. Only one state to go to, and a spin mismatch to slow it down.

Cs-137 has a nuclear spin of 7/2. It can decay into 3 different Ba-137 levels, the ground state, and two excited states. The majority go through an excited state with spin 11/2. The other two states have spin 1/2 or 3/2 (the ground state). So, a few more states to decay to, but some pretty large spin mismatches on several of them. The half-life is 30 years. 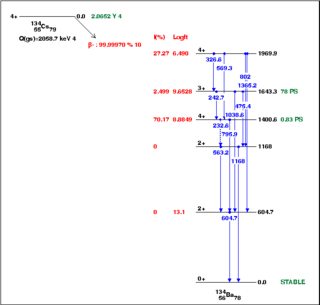 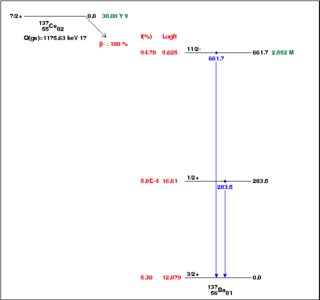 Share
Improve this answer
edited Jun 22, 2017 at 17:44
answered Jun 21, 2017 at 18:22
user4552user4552
$\endgroup$
0
Add a comment  |
Highly active question. Earn 10 reputation (not counting the association bonus) in order to answer this question. The reputation requirement helps protect this question from spam and non-answer activity.

3
Question on two-neutrino double electron capture
5
Why are nuclides with an even number of protons and neutrons more stable?

13
Why some nuclei with "magic" numbers of neutrons have a half-life less than their neighbor isotopes?
58
Why is technetium unstable?
45
Is it possible that every single isotope is radioactive, and isotopes which we call stable are actually unstable but have an extremely long half-life?
10
What are the longest half-lives we can detect experimentally? What stops us going further? Are we trying to?
3
Physical limit for the shortest possible half-life?
1
Why are all isotopes of tungsten considered (theoretically) unstable?
5
Is there any simple way to predict beta decay half lives?
1
What is an "excited nuclear isomer"?