In the body frame (principal axes) this means that the angular velocity vector has constant projection on the principal axis $\rho_3$ but its projection on the plane $\rho_1\rho_2$ rotates with angular velocity $\Omega$. This can be viewed as a precession of $\vec\omega$ around the symmetry axis of the body. The angular momentum is $\vec L=I\vec\omega$, so $$\vec L=I_1A\cos(\Omega t+\delta)\hat\rho_1+I_2A\sin(\Omega t+\delta)\hat\rho_2+I_3s\hat\rho_3,$$ Hence it lies in the same plane as $\hat\rho_1$ and $\omega$ and shows the same precession as the latter.

In the inertial frame we see the symmetry axis and $\vec\omega$ are precessioning with frequency $\Omega$ around $\vec L$. To me it is this precession that is seen as a wobbling (see this at 5:26).

If we consider a homogeneous disk, $I_3=2I_1$ so $\Omega=s$. However the classic result is a wobbling of frequency $2s$. The experimental demonstration can be viewed here at 0:50. This result can be obtained by writing the angular velocity components in terms of Euler angles and then solving for $\dot\alpha$. Looking at the Euler angles it seems in fact that the revolution of the line of nodes (denoted by N in the figure bellow) corresponds to the wobbling and both periods should be equal. 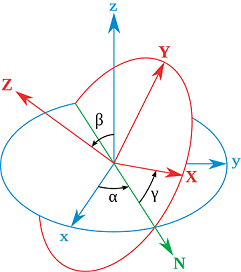 So my question is: Why does not the precession rate of the angular velocity vector give exactly the frequency of wobbling? In other words, how come the precession of $\vec\omega$ is different to the line of nodes rotation.

Why does not the precession rate of the angular velocity vector give exactly the frequency of wobbling? In other words, how come the precession of $\vec\omega$ is different to the line of nodes rotation? 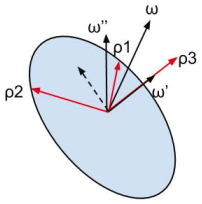 As we can see from the figure, the resultant angular velocity $\vec\omega$ is always off the symmetry axis of the disk, which means it has a non-vanishing projection in the plane of the disk (dashed line). At same time, the axes fixed in the plane of the disk, $\rho_1$ and $\rho_2$ rotates with spin $s$ (viewed by someone in the Earth frame). Hence, someone in the disk frame will see the axes fixed and the projection of $\omega$ in this plane rotating with rate $s$. That is why the precession rate equals the spin.

On the other hand, the wobbling effect is due to the non-vanishing $\vec\omega''$. A $2\pi$ rotation about the vertical line corresponds to a complete oscillation (wobbling) therefore the frequency of the wobbling is actually equal to the magnitude of $\vec\omega''$.

Not the answer you're looking for? Browse other questions tagged newtonian-mechanics angular-momentum rotational-dynamics angular-velocity precession or ask your own question.