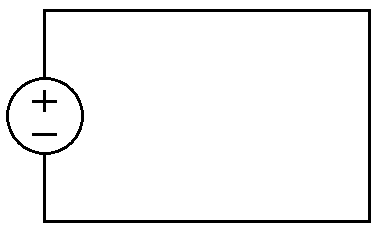 The battery sets up some electric field throughout the wire, with a component along (parallel to) the wire (otherwise, there is no current). Zooming into the wire, 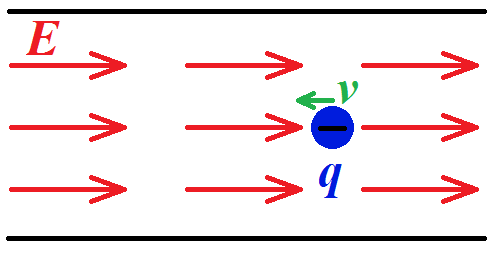 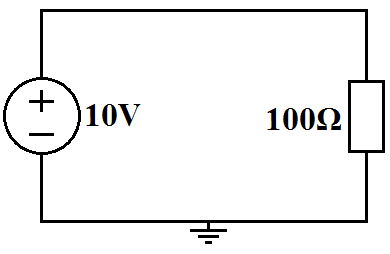 The potential at all points on the wire above the battery is 10V, below it - 0V. Considering the above - how is this so?

NOTE: I am aware that a non-ideal wire has resistance. My question lies with what resistance has to do with a difference in potentials in the first place - and why voltage drop is not CAUSED BY a charge's distance from the terminals of the battery.

Exact duplicate it is.

First, to avoid confusion and off-topic threads, replace your "wire" with a resistive conductor such as a heating element, a carbon rod, etc. (In other words, don't let your wire be melted or vaporized before a discussion even begins!)

Q: Inside the above non-ideal conductor, why is the e-field the same everywhere, regardless of electron position?

A: it's because electric circuits are based on electrostatics, where all the patterns of currents are determined by surface charge. A wire is very different than the insulating gap between the plates of a capacitor.

With currents in any closed circuit, a conductor will automatically develop a dynamically-adjusting pattern of surface-charge, where this charge distributes itself in such a way to guarantee that the conductor's internal e-field (inside each straight section of the conductor) is constant, and is directed axially along the conductor. The uniform current in a wire is caused by the pattern of e-fields produced by the gradient of surface-charge on that wire. The particular pattern of surface-charge arises from a complicated give-and-take feedback process, where the charge is determined by patterns of resistance and current-density in the conductor (and, the current-density in turn is determined by the patterns of surface-charge!) Simple calculations don't exist for such things, so in order to view/understand the charge-distribution and circuit-fields, we'd normally use FEMM Finite-Element modelling software designed for E&M. (That, or run away screaming! Go hide yourself under Ohm's Law and simple waveguide-mechanics, where the full complexity of the actual real-world physics is traditionally ignored.)

Note: the e-field in any curved sections of your conductors won't be constant. Instead, the surface charge will distribute itself so that any charges drifting inside the conductor are forced to take a curved path which follows the conductor.

An excellent and detailed treatment of this topic is available on the undergrad textbook site for MATTER AND INTERACTIONS:

.pdf: A Unified Treatment of Electrostatics and Circuits, 1999 Chabay/Sherwood

In introductory electricity courses, electrostatic and circuit phenomena are usually treated as separate and unrelated. By emphasizing the crucial role played by charges on the surfaces of circuit elements, it is possible to describe circuit behavior directly in terms of charge and electric field. This more fundamental description of circuits makes it possible to unify the treatment of electrostatics and circuits.

Quite a bit of circuit-physics is revealed in this paper about E&M misconceptions and textbook failure, Sefton 2002, Understanding Electricity and Circuits: What the Text Books Don't Tell You

When we say "there is no voltage drop in an ideal wire", what we really mean is "In many circuits, a wire may be approximated as having no voltage drop because the drop across the wire is insignificant compared to the drops across other elements in the circuit."

In your circuit, there is no other element aside from the source, so this approximation is invalid.

Therefore you must treat your wire as a low-valued resistor rather than an ideal wire with no voltage drop.

Then, for any one electron, isn't potential - with whatever reference - dependent on its POSITION in the wire?

Yes, the potential in a resistor depends on the position within the resistor.

To be as clear as I know how: In your circuit the potential does vary with the position along the wire just as you say it should. In this circuit you cannot say the wire defines a node with equal potential at all points. The wire acts as a low-valued resistor and the potential is indeed different at different points in the wire.

And - what does it mean for voltage to 'drop' across a resistor - and WHY does it drop - in terms of ELECTRIC FIELDS?

Electrostatic potential difference between points $a$ and $b$ is defined as

where $\ell$ is some path between the points.

As you correctly stated, when a source is applied to a resistor, a field is developed in the resistor, which exerts a force on charged particles, causing some of them to move, producing a current.

Since there is a field in the resistor, a potential difference is developed between its two terminals.

In comments you asked,

I'm asking why do we need a resistor at all for there to be a voltage drop?

You don't. If you just have a battery sitting on a table top with nothing connected to it, there will be a potential difference (aka "voltage drop") between its two terminals.

Why, then, with an 'ideal wire' and a resistor, does potential at a point in the wire does not with distance from the terminals of the battery?

In this situation, you no longer have uniform field strength along the path from one battery terminal to the other.

Your issues with the answer here largely revolve around the concept of an "ideal wire." So let's explore it here.

An ideal wire is supposed to be a circuit element that connects other elements with zero resistance. So the simplest way to picture it is as a wire of length zero - that is, the two elements are actually directly connected together, but it's simpler on a diagram to separate them.

If you don't like this view, then let's look at why the voltage drop across a resistor is higher than the voltage drop along a (real) wire. When the wire is connected to the source, at $t=0$, there will be an (assumed constant) electric field across it that is approximately equal to $V/L$, where $V$ is the potential difference across the battery terminals and $L$ is the length of the wire. But since this is a conductor, the electric field immediately moves charges around, pushing positive charges toward the positive end of the battery and negative charges toward the positive end. So if we examine the wire in the steady state, we see a buildup of negative charge toward the positive end of the wire and positive charge toward the negative end, which lowers the electric field "seen" by the inside of the wire and therefore lowers the potential difference across it.

In contrast, resistors are usually materials that are bad conductors, where charges are not as free to move around. Therefore, they can't reduce the electric field as much as a conductor does, meaning the voltage drop across them is higher.

So an "ideal wire" is a wire that is a perfect conductor, in which any electric field is immediately canceled by effectively instantaneous movement of charges, so there can't be a voltage drop across an ideal wire. Likewise, you can picture an ideal capacitor as an infinite-ohm resistor - charge is not permitted to move at all, so the electric field provided by the battery is completely unaltered.

Not the answer you're looking for? Browse other questions tagged electric-circuits electric-fields electric-current potential voltage or ask your own question.

-2
Electric Field Topology in a Wire
0
Would there be a potential difference across a cell connected with just a wire in complete circuit?