I stumbled across this problem , and wondered if Torque acting on this loop can be calculated with the given information, 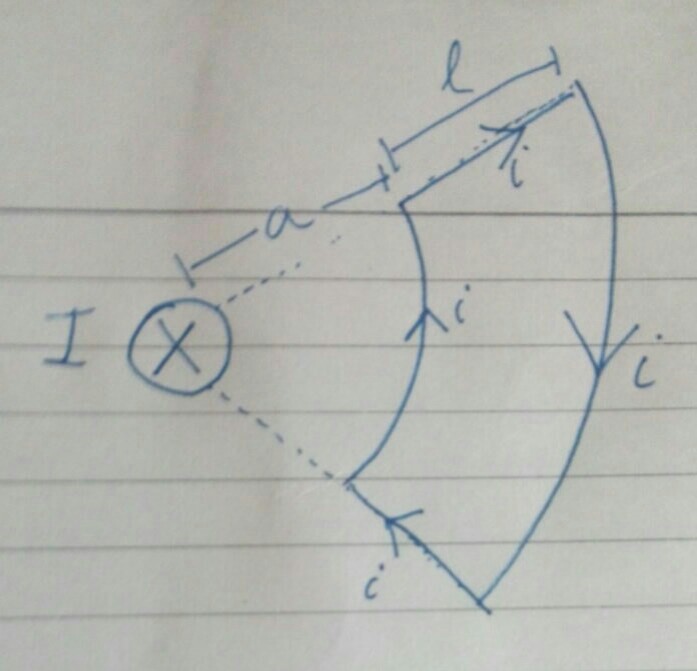 Here is what I did :

Considered that no force will be acting along the arcs.

Then calculated the Torques acting on the radially directed current elements about the point of emergence of long wire , say O, .

Pls verify of my thought process was correct or I did a mistake and torque on the loop is incalculable from the information , Thanks in advance.

As far as i can see, you are right that there will be no magnetic field along the arcs as magnetic fields will be parallel to the wire.Moreover,the force will be upwards and downwards in the radial part if you calculate using $dl\times B$.

Now ,you want to calculate the torque about the center point.Note, that the direction of torque $r \times F$ about the radial parts are symmetrically opposite and will exactly cancel out in the horizontal direction.So,the net torque is will be in the vertical direction that you should be able to calculate by integration. You will also need the angle between the radial lines.Actually,calculating the torques are pretty easy.

Not the answer you're looking for? Browse other questions tagged homework-and-exercises magnetic-fields magnetic-moment or ask your own question.

1
Calculation of tension in a loop with force acting outwards
1
Two points in a charged hollow sphere with zero potential difference
0
Force/torque on a current loop due to its own magnetic field?
0
Magnetic field of an n-side regular polygon
2
Angular velocity, angular acceleration and it's observer
0
Torque on a magnetic dipole