How to visualize electromagnetic radiation

So I understand that light travels in waves and that they are fluctuations in the electromagnetic field and yada yada yada... but when I sat down and actually thought about it, I became confused.

Electromagnetic radiation is produced by charged particles; when electrons move, they create electromagnetic radiation that radiates outward in all directions. But I've also read that light travels in individual waves (ignoring the latter half of wave-particle duality). If light travels outward in all directions, like a sphere of fluctuating field that grows bigger and bigger at the speed of light, then how can this "sphere" also be composed of individual waves? It would require an infinite amount of individual waves! Which is correct? Is either correct? Are both correct?

Any additional information on the correct way to visualize EM waves is greatly appreciated!

So I understand that light travels in waves...

However you try to produce EM radiation you end up with the acceleration of subatomic particles. You can accelerate them forth and backwards or you can rotate them in circles. And even a body with room temperature consists of "shaking" particles and by this emits photons (in the range of infrared range).

But I've also read that light travels in individual waves (ignoring the latter half of wave-particle duality).

As told above whenever you trace back to the source you'll see that EM radiation is made from individual photons from lots of subatomic particles. Since people are learned to synchronize the acceleration of electrons in an antenna rod we are able to observe the photons nature. 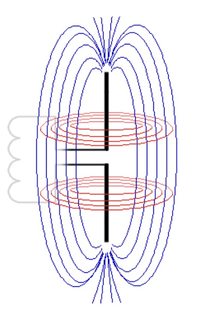 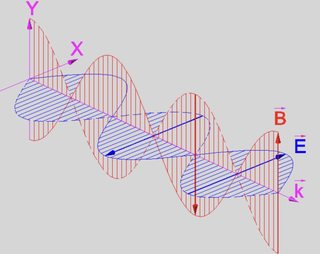 Any additional information on the correct way to visualize EM waves is greatly appreciated!

See this post about whot are photons, EM radiation an d EM waves.

In the context of Classical Electrodynamics, the electromagnetic field is a set of vectors permeating space, 2 in fact, $\vec{E}(\vec{r}, t)$ and $\vec{B}(\vec{r}, t)$. These fields satisfy the Maxwell Equations.

From the Maxwell equations, you infer that a charges produces electromagnetic fields, which are described in general by the Lienard Wiechart potentials (true those potentials give very messy expressions, but they do accurately describe the electromagnetic field described by some charge moving around and doing stuff). When you further analyze those solutions, you notice that some of those fields carry net energy and momentum (by calculating the poynting vector) to infinity! Those are the so called radiation field generated by moving charges (note moving charges also produce induction fields in the near field etc... but they no not "travel" per se, or in our language carry net energy to infinity).

Now what we mean by "light" is those fields produced by those moving charges that go to infinity, aka those radiation fields. In other words, when we say the word "light" we usually mean fields of the form $\vec{E} (\vec{r}, t)$ that carry energy/momentum to infinity. One of those is the plane wave solution $$\vec{E} = E_0 \cos (\vec{k} \cdot \vec{r} - \omega t)$$

Those spheres that you mention are basically constant wavefronts, in other words iso-field surfaces that propagate to infinity. Light is not an individual wave as you say it. It is just a word that is used to describe particular solutions to Maxwell Equations in vacuum (or non-lossy media). Those solutions happen to look pretty and have wavefronts (constant field surfaces) propagating to infinity at the speed c, accurately named, the speed of "light"

Not the answer you're looking for? Browse other questions tagged visible-light electromagnetic-radiation visualization or ask your own question.

93
What is the relation between electromagnetic wave and photon?

14
What is light, and how can it travel in a vacuum forever in all directions at once without a medium?
6
Huygens' principle in EM waves
0
Electromagnetic radiation and black body radiation
10
How can radiation be a transverse wave? Does light really resemble a rope? How can a 3D field be a medium for non-spatial 1D waves? Need mental model
7
What does a light wave look like? (3D model)
1
How to visualize electromagnetic waves?
7
Why is infrared radiation associated with heat?
3
How exactly does a Tesla coil make fluorescent light glow?
3
Can GWs move objects (excerpt pressure on matter) like EM waves?