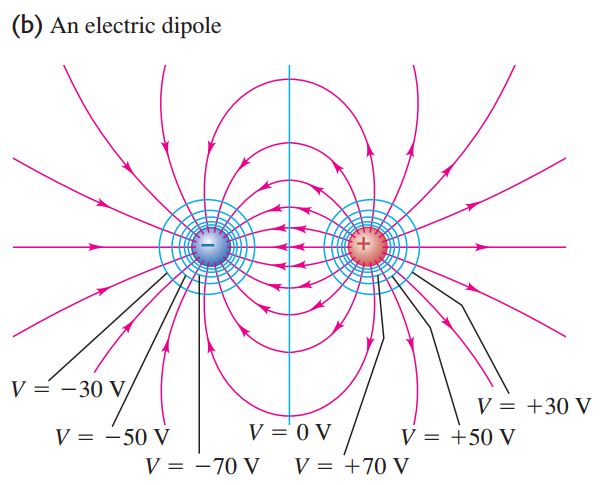 How is the voltage along the equipotential line between the two equal-opposite charges ZERO?

Two common definitions of voltage between points A and B: (1) The net-work per unit charge against the net-electric field required to move a (+) test-charge from A to B; (2) The net-work per unit charge that the net-electric field will do on a (+) test-charge released, initially at rest, along a path from A to B.

The numbers in the image above were computed according to the following expression:

This expression yields the potential of a test-charge at a point P a distance r_i away from a collection of point-charges 1 to i - with respect to infinity. However, this representation, IF TRUE, is hardly useful and massively misleading: a (+) test-charge placed anywhere along the $V=0$ line will move leftward until it touches the negative point-charge [assuming classical mechanics, or, treat the 'point' charges as macroscopic charged spheres]. Then, clearly, the particle indeed has a electric potential energy - and thereby electric potential energy per unit charge, or voltage - yet $V=0$?

Carefully investigating definitions (1) and (2), the only way this makes sense to me is if 'potential' here is computed purely along the path traced by the $V=0$ equipotential line; the vertical electric field components cancel to zero, and no work is done by the net-electric field as long as it stays on that path. Yet, this is also not entirely true - since work IS done on the particle BY the ELECTRIC FIELD, horizontally. A point charge will not move along the $V=0$ line unless an external force that is not the field impresses a force on the particle equal-opposite to that of the field.

You are correct in your reasoning. However, that line does have a voltage equal to $0$. The trick comes in from the fact that $V=0$ doesn't mean $\vec{F}=\vec{0}$. The force depends on the change in the potential, and, as you noted, it is changing; the potential just happens to have a value of 0 along that line. Think of it like an inland hill, where the bottom of the hill happens to below sea level but the top of the hill is above sea level. Just because the altitude is $0$ in the middle of the hill doesn't mean a ball won't roll right past it all the way to the bottom.

Electric potential works the same way as height does in the context of gravity. The electric force will always accelerate positive charges toward lower and lower potentials. The reason force doesn't have to be $0$ when potential is $0$ is because potential can and does go negative. The potential is $0$ on that line, but it's negative left of the line, so a positive test charge will be accelerated to the left.

You're right in thinking that potential is all relative and that saying it has a potential of $0$ is arbitrary. The value of potential is irrelevant; only change in potential matters. A very convenient convention, though, is to define the potential at $r=\infty$ to be $0$. That's where the equation you have comes in, and when we use this "gauge", the potential on that line can be found to be $0$.

The absolute value of the voltage doesn't matter. Everything we do with voltage relies on its value relative to a reference point. For this problem (and for others involving point charges) we conventionally require that the voltage be 0 at infinity. This constraint then determines the voltage values everywhere, and sets the value at the center to be 0. You could just as easily declare the potential to be 1V at infinity, and none of the physics would change; all of your potentials would just be 1V higher.

Update: After reading through some comments, the OP's conceptual error is now clear to me. OP writes in a comment:

"The point of the equipotential ... along the line." Not true. Rather, it doesn't require work ALONG THE LINE to move it along the line; work is still required perpendicular to the line to KEEP IT ON THE LINE, since the electric field is always pushing or pulling the particle away from the line.

It's true that a force opposing the electric force on the test charge is required to keep it on the equipotential line but work is not required.

Work is defined as force through a distance. If one exerts a force horizontally on the test particle to precisely cancel the force from the electric field such that there is no horizontal displacement, no work is done to (pardon me) KEEP IT ON THE LINE. This is elementary mechanics; a force perpendicular to the displacement does no work, e.g., centripetal force.

Since there is no electric field parallel to the vertical line, no work is done moving the test charge along that line and so, it is an equipotential line. And since the line extends to infinity where the potential is zero by convention, the potential along the line is zero.

Consider the situation where all to the right of the vertical center line is the same but, along the center line, is a grounded conducting plate.

That V = 0 on the conducting plate along the center line is obvious (the conducting plate is an equipotential surface). However, as evidenced by the method of image charges, the right hand side 'can't tell the difference' (the field is the same) between this arrangement and the actual dipole arrangement. From the linked Wikipedia article:

The simplest example of method of image charges is that of a point charge, with charge q, located at (0 , 0 , a) above an infinite grounded (i.e.: V = 0) conducting plate in the xy-plane. To simplify this problem, we may replace the plate of equipotential with a charge –q, located at (0 , 0 , − a). This arrangement will produce the same electric field at any point for which z > 0 (i.e.: above the conducting plate), and satisfies the boundary condition that the potential along the plate must be zero. This situation is equivalent to the original setup, and so the force on the real charge can now be calculated with Coulomb's law between two point charges. 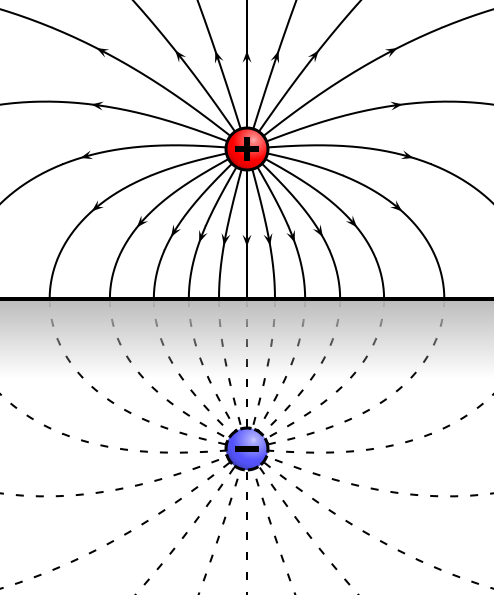 The picture and equations are correct; you need to adjust your intuition a little bit about what potential is telling you.

A small note: you can add a constant potential everywhere without affecting the physics in electrostatics - so technically any of those lines could be defined as V = 0.

If a test charge is moved from one point to another, it is the difference in potential that corresponds to physically observable phenomena. So you are right, if the test (electron) charge is released, it zoom towards the positive charge, gaining kinetic energy. You'll notice that it has crossed several equipotential lines in the process; therefore it experiences a difference in potential between the two locations, and this is the relevant quantity.

So you might wonder: "Well that's crazy, and hard to think about. The electric field is much more intuitive". While that may be true for a time, keep in mind the potential tells you something different than the force of a charge at a location. Let go of your charge anywhere along one of those equipotential lines, and it will be moving at exactly the same speed as it crosses any other line. To wit: it has accumulated the kinetic energy lost by the potential energy. 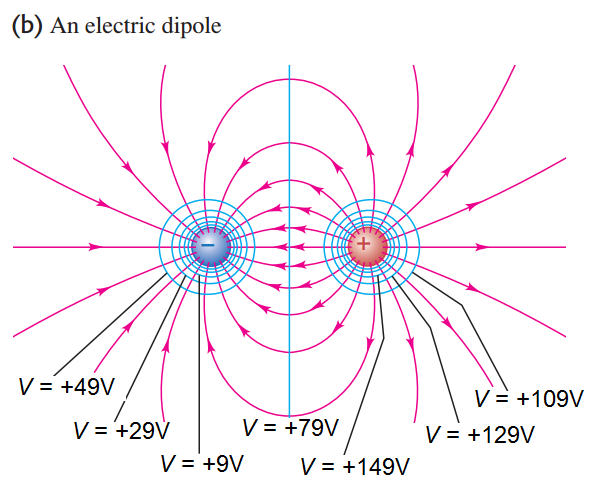 Once you realize this image is saying the exact same thing as your image, you'll be ready to understand the answer to your question.

Potential is relative. The only thing that matters is the difference in potential between two points.

If a charged particle moves along this line (or along any other equipotential line), no work will be done on it by the total electric force, as it is perpendicular to the movement. (If you don't understand this point, you should put down your electrostatics textbook and pick up your Newtonian mechanics textbook for a refreshment).

If a positively charged particle moves from the equidistant line to a line closer to the negative charge, it will have gained some kinetic energy from the electric force, since it has moved from a higher to lower potential (in your image, from 0 potential to a negative one).

Yes, it means that the net work done in moving a test charge vertically, along the equitorial line of the dipole is zero.

In fact, take this example -

You have an electric dipole with length $2l$, and let P be any point where a test charge (a unit positive charge) on the equitorial line of the dipole at a distance $r$ from the midpoint $O$ of the dipole is kept. Something like this - 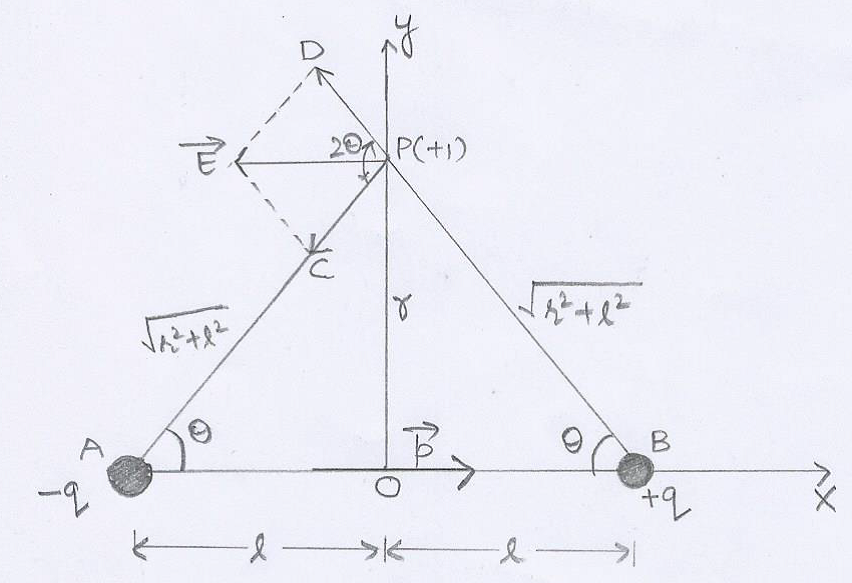 (Pardon me, I found this image on Google; but it does serve the purpose)

Let's find out the potential at a point in the equitorial line and do the math. Since potential is a scalar, it would simply add up.

Work would be done, if you were to move the test charge horizontally, along the axial line of the dipole, but that isn't the case here.

Not the answer you're looking for? Browse other questions tagged electrostatics electric-fields potential voltage conventions or ask your own question.